Just when I thought I couldn't love Adam Jones any more...

...he welcomed prospect Kevin Gausman to camp with 1500 powdered donuts.

Share All sharing options for: Just when I thought I couldn't love Adam Jones any more...

I woke up this morning to see this tweet from Adam Jones near the top of my Twitter stream: 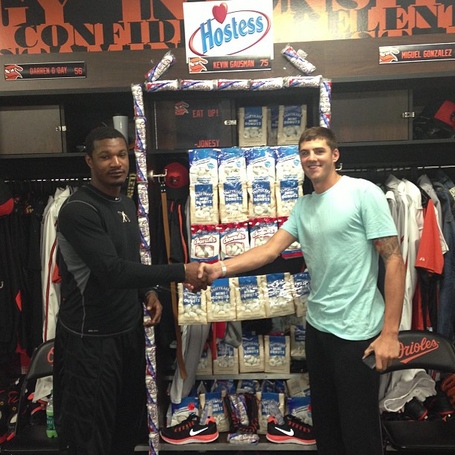 Shorty after that was a tweet from Kevin Gausman:

Thanks to @simplyaj10 for giving me about 1,500 donuts!! I think I'm set for the whole season #PowderedGold twitter.com/KevinGausman/s…

Zach Britton also had some tweets around the same time regarding the same subject, but whether he was one of the masterminds or just a bystander is unknown.

I know it's Spring Training and everyone is having a good time and in good spirits, but this is just one more thing that Adam Jones does that makes me love him. And in case his profile picture in the embedded tweet is too small for you to tell and you're wondering why Adam Jones looks like an old white guy, that's because that's a picture of Earl Weaver, and it has been Adam's Twitter picture ever since Earl Weaver passed away.