Age is not just a number

Will the 2013 Orioles get better on their own?

Share All sharing options for: Age is not just a number

It's been pretty well established at this point that the 2013 Orioles will essentially be the 2012 Orioles. One of Dan Duquette's stated premises in rolling with an essentially unchanged club is that he sees a solid core of talent that will get better on its own. Operating under the assumption that last year's playoff team played above their heads, is there anything to Duquette's assertion? Will this team be able to compete just based on the natural improvements of its young core?

There are plenty of analyses out there by people smarter than me about the age progression of baseball players. You can read some good ones here and here. I'm not going to rehash their work, but I'm going to operate under the broad premise that players 26 and under should improve, players 27-31 should maintain relatively stable production, and players 32 and over should decline. I'm only going to focus on our expected starting batters and pitchers, under the assumption that reliever performance fluctuates too much for age progression to be a primary factor, and that bench players won't be the difference-makers in the success or failure of the season. I'll also break out some outliers among the starting pitchers and hitters who have not followed any kind of normal aging progression in their careers. In some cases, I'll just list the players, but where applicable I've included some notes. All ages listed are as of Opening Day.

Manny Machado (20) - This is an important one. Machado will be a major part of any natural improvement for the Orioles, as they can expect his offense (which was basically league-average in 200 PAs last season) to improve, but also expect Manny to hold down a solid defensive third base all season, instead of making fans wish for a tree with a glove on it to replace the Reynolds/Betemit butchery at the hot corner.

Chris Tillman (24) - Another critical one (along with pre-prime starters not currently in the rotation, and not listed here, Zach Britton, Jake Arrieta, Brian Matusz and Steve Johnson). If the Orioles get some starting pitching consistency from within the organization, that will go a long way toward natural improvement. Tillman enters 2013 with the greatest chance to provide that stability, following a 2012 campaign where things finally clicked (though some of that success may have come from an unsustainably low BABIP).

Wilson Betemit (31) - The most important thing about Betemit is not that his hitting improves from 2012, but that he's only used in roles that will add value to the team. Say it with me, Buck, Betemit only hits against righties and never picks up a glove.

Brian Roberts (35) - I didn't include Alexi Casilla in this write-up, but it's interesting that Roberts is truly the only post-prime starter in our lineup. As little as I expect from Roberts in 2013, though, it's worth noting that whatever the Orioles get from Roberts (or Casilla, or even Ryan Flaherty) in 2013 is replacing the below-average performance of Robert Andino and Omar Quintanilla - and will likely add value to the club from that baseline.

Jason Hammel (30) - You could easily include Hammel in the "prime" category, but really 2012 was a huge breakout year for Hammel, based on the discovery of his two-seamer. I think the new Hammel is for real, but it would be premature to say statistically that he's likely to improve meaningfully on that performance based on his age alone.

J.J. Hardy (30) - I was going to explain the oscillation in J.J.'s performance, but I made this picture instead. You want to pretend you can predict how his bat will play in 2013? 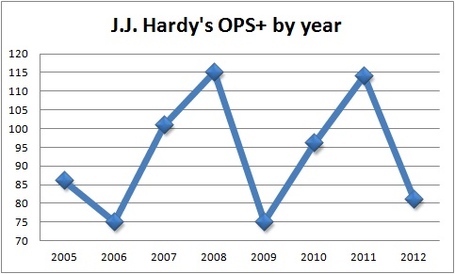 Nolan Reimold (29) - As I've said before, the issue with Reimold isn't so much his year-over-year performance as whether or not he can put in a significant number of at-bats for the club.

Miguel Gonzalez (28) - I love Gonzalez's story as much as the next guy, but I'm not banking on a journeyman who broke out from nowhere to improve based on his age alone.

What Does It Mean?

I was surprised in writing this article what a good position the Orioles roster is in. It's not at all unreasonable to expect consistent or improved performance from almost our entire rotation and starting lineup. Someone will regress unexpectedly, of course, and someone will get hurt, but I'm still impressed with our position going into the year. Even all of the "outliers" broken out above are in their traditional primes.

Of course, the Orioles will need improvement to stay in the hunt this year. It's easy to point out that the team that racked up 93 wins last year barely outscored their opponents, finishing with a Pythagorean record of 82-80. But in reality, the roster I'm examining above is closer to the one that went 47-25 to finish out the year, and actually matched it by outscoring their opponents 340-276, rather than the club that started the year just over .500 and got outscored. And that 47-25 club wasn't some uninjured fluke, either - those guys won while missing significant time from Markakis, Betemit and Hammel, and Reimold wasn't around for that half at all. If the 2013 Orioles take that foundation and build on it, in a weakened AL East, they could end up right back in the thick of things.