As the Norfolk Tides close the page on their first home stand and games of the season, a hodgepodge of players and Norfolk’s Manager Ron Johnson spoke about their first impressions. Players that spoke with Camden Chat included utility player Russ Canzler, catcher Chris Robinson, and outfielder L. J. Hoes

Share All sharing options for: The Weekly Tide Report 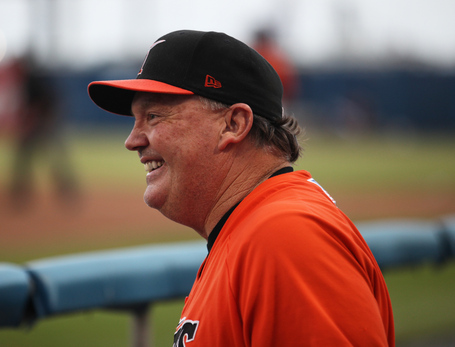 Former Tampa Bay Ray Russ Canzler put his stamp of approval on his new club stating, "I think that we are looking for a little more wins. We have a tremendous group of guys here with major league experience. I think it’s a matter of us continuing to push and not start panicking. I think as along as we do that and keep playing our game the wins will be there."

Twenty-six-year-old Canzler extends an olive branch to younger players as the Berk, PA native chirped, "I just try and help players stay calm. I’m not too much of a verbal guy. Hopefully some guys can pick up on that. We have a good group of guys here. Jonathan Schoop, he comes and talks to me after games about my approach."

Chris Robinson, the eight-year pro out of London, Ontario relayed his thoughts on this year’s club saying, "We didn’t get off to the start we wanted. We had a couple crazy series with the weather. I think we haven’t hit our groove yet. It’s not time to panic. We’ve seen a lot of really good things. It’s a matter of putting things together and I don’t think we’re far off. We need to keep grinding it out and we’ll get to where we want to be."

Speedy outfielder L. J. Hoes tossed his idea around about the baby O’s start indicating, "We have some good pitching, some good players. We’re swinging the bat pretty well. We haven’t got those timely hits and sometimes the ball hasn’t fallen."

Tides Manager Ron Johnson opened up about how the season is going prior to the tilt against the Charlotte Knights on Tuesday. "Anytime it’s this early they're doing fine. It’s a matter of playing games. The way for us right now is to feel our way through things. We’re acting right; we’re playing hard; we’re getting the work done. We’ll start worrying about the results as we get down the road. Guys will work themselves into roles, spots in the orders, and somebody will take off."

As the Tides continue to roll through the month of April, they look to even out their three and four record. As every triple-A baseball player knows the season will have its highs and lows. Although Norfolk seems to be heading in the right direction with a six to four victory over Charlotte Wednesday afternoon, it’s still early in the season and remember that every team no matter what the sport will have its fair share of letdowns during the season. There is a quote to remember here, "It doesn’t matter if you get knocked down in life, all that matters is how fast you get back up (Ben Affleck at the Oscars)." This quote holds true for the Norfolk Tides.