The joyful and the depressing, after 13 games

Before this season commenced, Stacey posted a fun little preseason quiz about various milestones the Orioles and their players might achieve during the season. It's too late to enter, but you can check it out and see what your fellow Camden Chatters guessed. Now that the season has 13 games in the books, though, I thought it would be fun to make up some questions with surprising, or even absurd, answers that define these first few weeks of play. (Yes, I'm just using this as a platform to make some sundry observations, and aren't you clever for figuring that out).

When will Adam Jones' batting average dip below .400? Hey look, that didn't happen!

Which team will sweep the Orioles first? No dice after the first big road trip of the year.

How many Orioles will have more RBIs than several major-league teams after the first five games of the season? Wow, that is an absurdly specific question and unlikely scenario, but, hey, look, it's Chris Davis!

Which Oriole will hit six home runs in the first nine games? 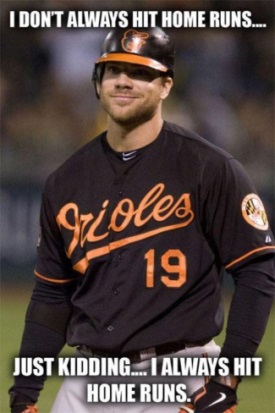 Who will be the first Orioles starter to go seven innings? So... that's a thing that hasn't happened just yet.

How many games until Brian Roberts makes his first DL trip of 2013? Frowny face.

How many defensive miscues will Adam Jones make in the first twelve games of the season, and how many runs will they cost the Orioles? Three, and five, by my count.

Which will be higher, walks issued by Jake Arrieta or combined walks taken by the Orioles' DH and 2B slots? Yikes.

When will Ryan Flaherty's OPS crack .400? The world would love to know.

To put everything in context, most of this analysis is based on 12 games' worth of statistics, nine of which were on the road against tough division opponents. The Orioles came out 6-6, which is highly respectable. The team is seeing some unexpected flashes of brilliance from Davis and Jones, and managing to overpower some unexpectedly horrible problems in starting pitching and Flaherty (seriously, let's have some Alexi Casilla). This is why we play the games - a lot of the questions above would've sounded outright stupid a few weeks ago. And yet here we are. The AL East looks like as much of a mosh pit as we were promised, and the Orioles are holding their own so far.