The View From Your Seat - Flashback Edition!

Ten years ago on Opening Day, this happened.

Share All sharing options for: The View From Your Seat - Flashback Edition!

Every now and again when the topic of various opening days comes up, people mention that time it snowed at Camden Yards and how it was the most ridiculous day ever. Well, that day was 10 years ago, and Camden Chat reader Willie was at that game and took the picture of the snow shown above. In the game, which was against the Cleveland Indians, started out looking like this (I recommend clicking each of these photos as they look much better big):

Not a bad day. The skies were gray, but the game got underway as expected. Rodrigo Lopez was on the mound for the Orioles. By the third inning though, it was snowing hard, like this: 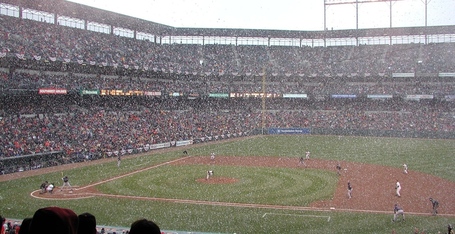 Lopez struggled, as you might expect a pitcher would do when pitching in a snow shower. The Indians scored three runs that inning, in part thanks to right fielder Jay Gibbons losing a fly ball in the snow. Said Gibbons, "I couldn't even see the hitter, that's how bad it was. I heard him hit it, and that was about it. I saw the umpire looking at me; I think he was waiting for me to make a move. That was crazy."

After a 13-minute snow delay, the game resumed under sunny skies. It looked like this:

Just like that, the snow was gone! The O's and Indians finished the game, a back and forth affair that ended in the 13th inning when Gary Matthews, Jr. hit a walk off single to give the Orioles a 6-5 victory. Hm...a one-run, extra-inning victory? Sounds familiar.

It's been a decade since what I am very cleverly called Snowpening Day, and thankfully there is no winter weather in the forecast. And even more thankfully, Jay Gibbons no longer plays right field for the Orioles.