Orioles 5, Angels 1: Tillman Breaks On Through to the Other Side

Feel that stiff breeze? That was Josh Hamilton.

Share All sharing options for: Orioles 5, Angels 1: Tillman Breaks On Through to the Other Side

Chris Tillman turned in a strong performance tonight and joins Wei-Yin Chen as the only Orioles pitchers to complete eight innings. In honor of their joint accomplishment, they plan on forming a ska band called the Crazy 88s so be on the lookout. Tillman didn't look particularly dominant tonight as he only managed to punch out three batters including one against the modern day swashbuckler Josh Hamilton. His control looked better as he only gave up two walks but mostly his batted balls found the right fielders who executed properly. The Angels' best chance to score occurred in the first inning when Mike Trout was gunned down at the plate by Nick Markakis. After that inning, the Angels fell victim to a barrage of ground outs, flyouts, and line balls. Tillman largely relied on his fastball which sat in the lower 90s during the early part of the game and he seemed to get stronger as the game progressed. According to the stadium gun, Tillman hit 94-95 several times in the 7th and 8th inning. PitchFX data indicates that Tillman thew 76 fastballs (averaging 93 mph), 20 curve balls, and then handful of other offspeed pitches.

Tillman faced off against Joe Blanton who limited the Orioles to three runs, two earned, over eight innings. Blanton threw a ton of 83 mph change ups while mixing in some fastballs and sinkers. His junk was somewhat effective as the O's could only manage two extra base hits. Chris Davis doubled in Adam Jones in the 6th inning. And then in the 7th inning, Nick Markakis scorched a liner past 1B into the right field corner to score Nolan Reimold who reached after a Tarzan wild throw by 3B Brendan Harris after fielding a routine ground ball. However, Blanton received a gift out from Chris Davis in the 4th inning who thought he was out on a force play at 2nd but didn't see that the fielder dropped the ball who then tagged Thor out. Blanton exited the game after eight innings and Mike Scioscia brought in Ryan Brasier for the 9th inning. Making his major league debut, Brasier give up a two run bomb to Nate McLouth after giving up a single to Nolan Reimold. Mike Trout nearly made a spectacular catch to rob Highlander, but he couldn't quite hold onto the ball and it dropped over the fence. Jim Johnson, who had already warmed up, was brought in a non-save situation to finish out the game. He gave a home run to Albert Pujols before striking out Hamilton to preserve the win. Luckily, the rally monkey managed to jump over the stiff breeze generated from Hamilton's last strike out. 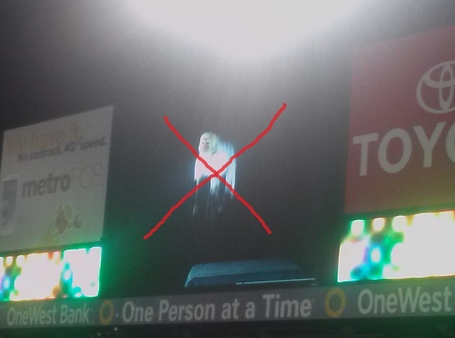 There are really only two interesting questions from this game for discussion. First, did Buck Showalter make the right decision by not letting Tillman go for the complete game? After eight innings, Tillman had thrown 114 pitches and his highest pitch count total ever was 125 pitches against Seattle on July 4th, 2012. Second, did tonight's outing represent a step forward for Tillman or do the Angels just suck? The Angels managed to get plenty of wood on the ball tonight but couldn't muster any runs. Whereas last year Trout was playing Bugs Bunny baseball against the O's, tonight he looked pedestrian at the plate and in the field. In the end, Tillman's ERA dropped over a point after tonight's outing. Hopefully, he can build upon this success and start to look like the 2012 Tillman again.