Any domestic travel I do, I always prefer to work in a trip to a baseball stadium I haven't seen yet. So when my sister's college graduation near Los Angeles came up, of course, I pondered the possibility of catching a Dodgers or Angels game. It was only when I took a look at their schedules that I found out that the Orioles were playing that very same weekend in Anaheim. And when my wife suggested that we make the trip into a full-blown California road trip, starting out in San Francisco -- lo and behold, the Orioles would also be playing in Oakland the weekend we'd be up there. And so, what could've been a fairly simple family obligation became a chance to see my team on the road, in two new-to-me ballparks. 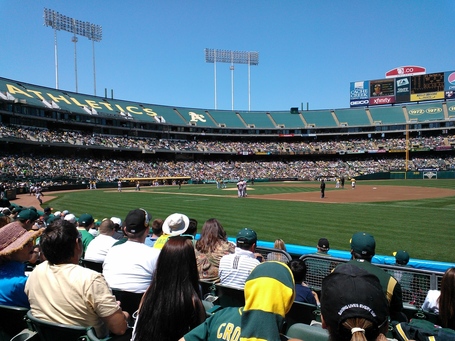 We sat a few sections down from the visitors' dugout to take in an Orioles 7-3 victory on a nice Saturday afternoon when the A's were celebrating the anniversary of their last World Series win. Contrary to the popular perception (which is most likely due to Raiders' fans antics), the Athletics' fans were great - they clearly knew their team, and I got a lot of good-natured crap, but no meaningful heckling. In fact, the whole Oakland-San Fransisco divide reminds me of DC-Baltimore in a lot of ways. San Fran is the bigger market, the more cosmopolitan of the two, and seems more nationally recognizable, but Oakland is the grittier market with its own rabid fanbase and lots of history. There are two key failures in comparison, of course -- the Giants and A's are both storied franchises, whereas the Nats are new kids in town; and in the DC-Baltimore divide, the smaller market has the better park as a draw. The latter is decidedly NOT the case in Oakland.

The O.co Coliseum deserves every bit of its shabby reputation. The park is surrounded by an old-style ocean of stadium-owned parking lots, not integrated into a neighborhood at all. You walk through tomblike concrete tunnels as you enter the park, and when you finally get to the seating area, you still don't really feel like you're in a baseball park. It's so clear that you're in an aging, multipurpose facility, that you can never really forget it. The A's put tarps over the 400-level seats to make the park feel less empty (and those tarps don't even come off during a sellout, like the game I was at), but really they have the opposite effect. The stadium has two tiny jumbotrons above those empty sections, which are pretty hard to see. The Oakland fans deserve better. I hope Oakland, San Francisco and MLB can come to some kind of accord to get the A's their own park soon, whether it's in San Jose, downtown Oakland or somewhere else.

The one area where the A's have improved the fan experience in the Coliseum is the concessions - on the main concourse, unique food offerings and selections from local breweries abound. It was fun to stroll through and take in all the choices before deciding what to eat and drink. Having a draft New Belgium Ranger IPA while taking in a game on a hot spring day is a pleasure that can't be overstated. 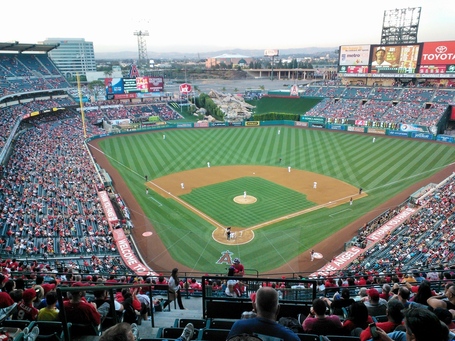 After meeting up with my family in the LA area, we all headed out to Angels Stadium to witness an ugly 4-0 shutout where the Orioles' hitters were baffled all night by the likes of Jason Vargas, then proceeded to make my night all the more miserable with baserunning and defensive miscues, even though the game was lost regardless of those mental slip-ups. Angels fans turned out well for this game, which came in the midst of a span of several unseasonably hot days in SoCal. They were universally friendly to me and my family, even with most of us in Orioles garb. There was a more noticeable smattering of Orioles fans here than there had been in Oakland, too.

Oakland versus Anaheim is a contrast study in stadiums. Angels Stadium is also a 1960s multipurpose bowl surrounded by a sea of parking lots, but Anaheim has really made the most of their situation, with the park undergoing major renovations in the late 1990s and feeling every bit like a real ballpark now, with some open-air views in center field, enclosed bullpens past the left field wall, and pleasant open-air concourses. Also the exact opposite of Oakland, though, the concessions at Anaheim need some major work. In the upper deck, the beer selections consisted of Bud Light, Coors Light, Pacifico, Modelo and Third Shift Amber Lager, a faux-craft beer from MillerCoors. It was enough to make a beer snob grumpy (which isn't a tough feat, I know). Food selections were slightly better, with odd choices like Panda Express and Jack in the Box smattered around the park in addition to standard ballpark fare.

Never, ever get in a line with me

Not only do I always pick the worst concession line possible -- you know, the one with a slow, surly cashier and the guy ordering food for a group of 20 -- but I also do so at the most inopportune times. In the two games I attended, five home runs were hit. I was in my seat for one of them.

The Orioles should take me with them all the time

The Orioles struggled mightily in Anaheim and Oakland last year, going a combined 3-7 in those parks. The birds just took three of four in both series I attended, whereas they dropped two of three in Seattle, the only west coast stop where I wasn't with the team. Let's ignore the fact that the team only went 1-1 in the games where I was actually present, and conclude that the Orioles should fly me around the country with the team, as a good luck charm, at least as an experiment for the rest of this season.

...But if they do, they should hire more trainers

Taylor Teagarden landed on the DL following the game I attended in Oakland. Chris Davis left the game in Anaheim after tweaking his knee (but thankfully, has avoided the DL). If we run with the idea that correlation is causation, and my attendance can actually affect things, this is not a good track record.

Fireworks at ballparks can be fun

Most fireworks nights I've been to at ballparks have left me unimpressed. The shows are usually short, and they make the fans move around and crush into a small section of the seating bowl. The Angels did this right, setting off a huge display out past center field, which fans could see from anywhere in the park, and they choreographed the whole show to a variety of music quite well. 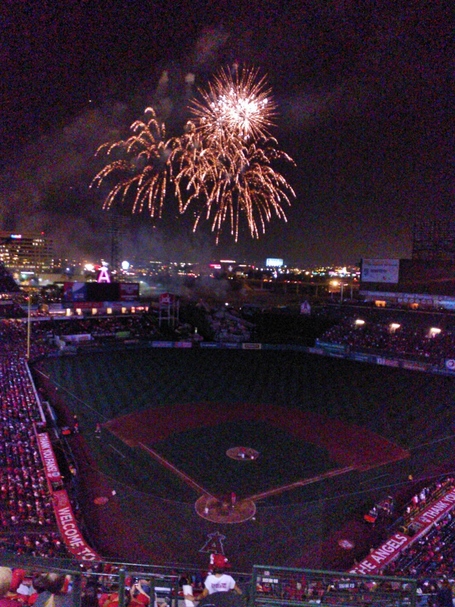 Driving down the Pacific Coast Highway in a convertible is awesome

This has absolutely nothing to do with the baseball portion of my trip, but it's true. I highly recommend it. 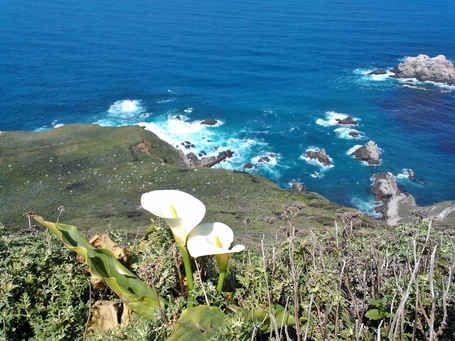