The Orioles are down right now, but they're still in this thing. This weekly column will keep track of the races until the O's are either out of it altogether or headed to the playoffs. 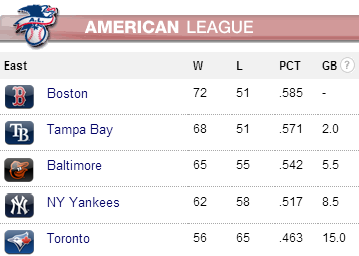 Last year around this time I started posting a weekly scoreboard watching article in which I looked at all the teams in the A.L. East and in the wild card race so that we could keep track of the threats to the Orioles. When I got back from vacation last weekend I decided it was time to start it again, but my enthusiasm waned with the sweep in Arizona. But still, the O's are in this thing! And it's not over until it's over, so here we go.

The Orioles are coming off of a tough road trip, going 4-4 after starting 4-1 and blowing more saves than I care to recount. If the Orioles miss the playoffs, the series they just played in Arizona might end up being the most important of the entire year.

But all we can do is look forward, and the Orioles have a chance over the next seven days to gain some valuable ground. Beginning tonight they play a three game series with the Colorado Rockies in Baltimore. The Rockies are not a good team this season, currently with a 57-65 record. That may not give you much solace given the O's performance against sub .500 teams, but it's a very winnable series.

They follow that with a three-game series against the Tampa Bay Rays, a crucial series if ever there was one. The Rays are currently 3 1/2 games ahead of the Orioles in the A.L. East and are the first wild card team. It of course depends on what happens with both teams over the weekend, but as long as the Orioles win their series this weekend they'll be in position to gain serious ground against the Rays.

It's looking increasingly like either the Rays or the Red Sox will end up winning the A.L. East, meaning that the Orioles' best hope is to capture a wild card spot. But there is still a chance as the Orioles play the Red Sox head-to-head nine more times this year. So keep the faith!

The Red Sox have been down of late (not that the Orioles could take advantage) having lost back-to-back series against the Royals and Blue Jays. This weekend they face the Yankees, which means we have to force ourselves to root for evil once again. After that they go to San Francisco to play three against the Giants. Based on records the Red Sox have a soft week coming up, but Yankees/Red Sox games tend to be excruciating. Not to mention they play at 8 p.m. on Sunday night in Boston then fly to San Francisco without a day off. So that could hurt them.

The Rays were looking down, losing six games in a row before getting the final two games against the Seattle Mariners over the last two days. They'll spend the weekend at home playing the Blue Jays. I'd say that doesn't bode well for the Orioles, but the Jays did just take a series from the Red Sox so maybe they're getting hot.

After that, of course, the Rays come to Baltimore to face off with the O's. Here's hoping that's a big series. 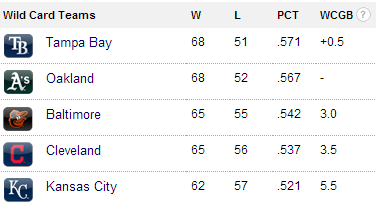 The Oakland A's, like a number of teams on this list, haven't been lighting the world on fire. They're 4-6 in their last ten and just lost a series to the Astros. This weekend they play at home vs Indians, which is conflicting. I suppose we root for the Indians, but the Indians are just 1/2 game behind the Orioles in the W.C. race so that could backfire. After their series with the Indians, the A's stay at home for three against the Mariners. Go Mariners!

As long as the A's start losing, it makes no difference to me if the Rangers start losing. But it'd be nice if both the Rangers and A's ended up with less wins than the Orioles so that they didn't have to worry about either team. Plus the Rangers are in the playoffs all the time so I don't mind if they miss.

Anyway, the Rangers have a cake walk of a schedule over the next week. They'll be at home first against the Mariners and then against the Astros. Fabulous.

How about those Indians! It must be that Mark Reynolds signing....oh wait. At any rate, they are pretty far back in the A.L. Central race but still have hopes for the W.C.

The Indians looked to be toast last week, losing six games in a row. They bounced back to win three of the last four. This week they head to the west coast for three games against the A's and then three against the sad sack Angels.

The Royals and the Yankees don't really have a chance for the playoffs, but neither are too far behind the Orioles which is why I mention them. If either of those teams pass the Orioles, it's over.

Even with that, I like seeing the Royals win. They started a four-day, five-game series with the Tigers last night. They lost the first game but will play a double header today followed by games on Saturday and Sunday. After that the Royals go home for three against the White Sox.

The Yankees just took three of four from the Angels and will now try to help the Orioles out by beating the Red Sox this weekend. They follow that with four against the Blue Jays.

TL;DR - Who should we root for?

This weekend the teams to root for are the Yankees, Mariners, Blue Jays, and (kind of) the Indians.