Spirits are down in Birdland, but the Orioles aren't out of it yet. What will they and their opponents face in the upcoming week?

The Orioles continue to tread water in the standings and they're beginning to run out of time. They need a winning streak, and fast. 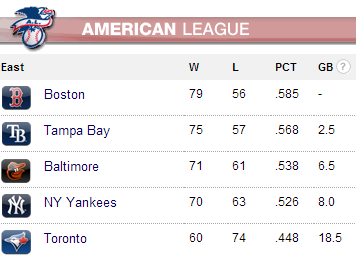 The Orioles start a three game series against the Yankees tonight, then head to Cleveland. It's their last stop on the road trip against three tough teams. If the O's could go 6-0 over this week, that'd be swell.

The Red Sox had a successful week, going 4-2 against the Dodgers and Orioles. I really hoped they'd lose a series to the Dodgers given how hot that team has been, but alas. The Sox took two of three from both teams and as a result gained 1 1/2 games on the Rays.

The Red Sox remain home for the week, first to host the White Sox over the weekend and then they'll play the Detroit Tigers three times next week.

This weekend the Rays travel to the west coast to play three games against the Athletics then four more against the Angels. At this point I think we need to root for the Rays to sweep the A's so that the Orioles have a chance to over take them.

The Yankees went just 2-4 this week, losing two out of three to both the Rays and the Toronto Blue Jays. They lost 1 1/2 games in the Wild Card and 2 games in the East, both of which will be nearly impossible to overcome. The Yankees and the Orioles are pretty much in the same boat, playoffs wise. The Orioles are in a bit of a better position since they have one less team to hop, but it's close.

This week the Orioles and Yankees play three at Yankee Stadium, then the Yankees host the Chicago White Sox for three games next week. 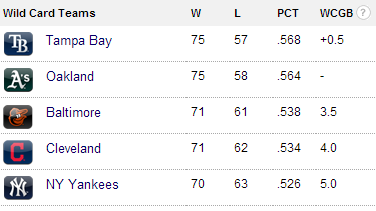 The A's started off the last week with a series loss to the Orioles, but came storming back to take three out of four from the increasingly useless Detroit Tigers. That gave them a 4-3 record on the week which was good enough for them to gain a game in the WC standings, but lost 1/2 a game on the Rangers in the A.L. West

The A's play the Rays this weekend then next week have a big series against the Texas Rangers at home.

The Indians went 2-4 on the week. They started with a series win against the Twins but then were swept by the Atlanta Braves on the road. Their poor week resulted in lost ground in both the A.L. Central and the wild card. They lost 1 1/2 games on the A's.

The Indians are happy to get out of Atlanta and now they head to Detroit to play three against the Tigers. They'll follow that with a home series against the Orioles.

TL;DR - Who should I root for this weekend?

You should root for the White Sox and Tigers. It's hard to say who you should root for between the A's and the Rays, but it would be in the best interests of the Orioles if one of them swept the other (while the Oriole sweep the Yankees, of course).