The Orioles' beloved bird mascot was made to look foolish during multiple mid-game entertainment sessions in DC last night.

In the midst of an disappointing 2-1 loss to one of the NHL's worst teams, as the Washington Capitals continued to play far below their talent level, the Verizon Center attempted to distract Capitals fans from their woes by subjecting the Baltimore Orioles' beloved bird mascot to ridicule and derision between periods.

The mockery kicked off between the first and second periods. To celebrate "Kids Day," the Phone Booth hosted a matchup between a local kids' hockey team and a motley crew of area mascots (accompanied, for no apparent reason, by the Columbus Blue Jackets' Stinger mascot). But while most of the mascots were sent out on skates, the Oriole Bird was trotted out in nothing but his usual flat-soled shoes. So it was no surprise when a small child streaked right by the bird to score a critical goal in the exhibition. Just imagine the Orioles forcing Slapshot to bat or run the bases with his skates on in mid-July. You can't imagine it, can you? Says a lot about the class of the two organizations.

As offenses go, this first one was fairly minor. After all, you might say, mascots are meant to be goofy and entertaining. But the derision was just beginning. In the middle of the second period, the Oriole Bird was relegated to Capitals t-shirt toss duty. That's right, a regional mascot was sentenced to the intern-like duty of throwing cheap t-shirts to the crowd -- of another team.

But even there, the humiliation wouldn't stop. Between the second and third periods, to prevent Caps fans from dwelling on the fact that they couldn't score on Ryan Miller even if they were spotted a soccer net for ten minutes, the Oriole Bird was zipped up inside a giant hamster ball and forced to roll himself around the ice in a "race" with the Capitals retired mascot, Winger. The Bird fell over multiple times, and in spite of "winning" this forced contest, clearly he left the arena feeling like half the bird he used to be.

Your loyal Camden Chat correspondent captured photographic evidence of these indignities, but they're not for the faint of heart. I'm expecting a formal apology from the Capitals organization to the Orioles any day now. 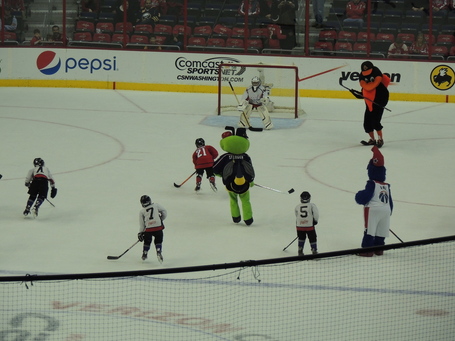 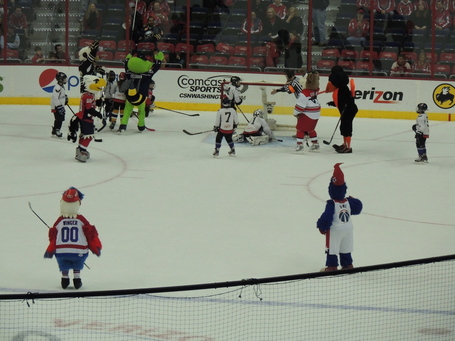 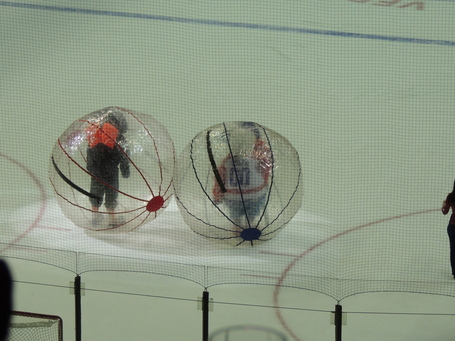 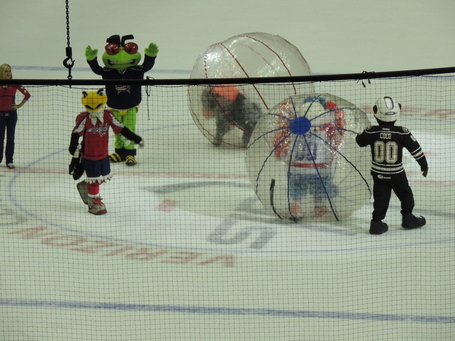 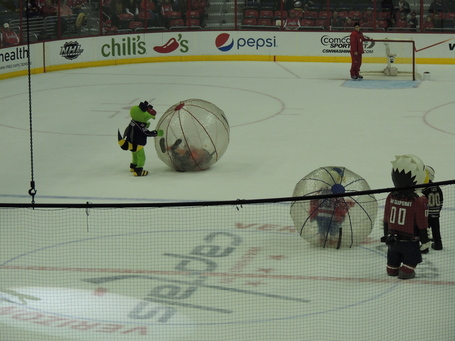 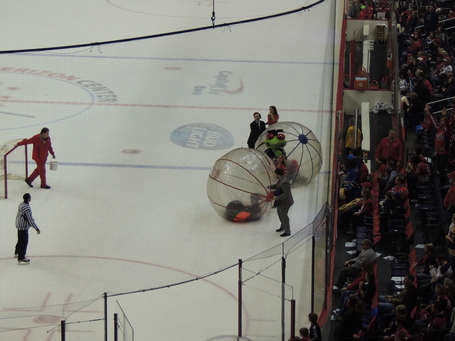