The Orioles have had a terribly quiet offseason. They should wake up their quiet offseason by signing free agent starting pitcher A.J. Burnett. Burnett is rumored to be either considering retirement or coming back to pitch.

The Orioles rotation needs a substantial upgrade. I have found the solution to that problem. A.J. Burnett has spent the last two season with the Pittsburgh Pirates after the Yankees agreed to pay a portion of his contract to make him go away. I'm not sure if the Yankees regret that decision, but they should. Burnett has been fantastic over the past two seasons for the Pirates posting ERA's of 3.51 and 3.30 respectively with even better FIP's and xFIP's. Wow, it didn't take me long to get two SABR acronyms in this piece.

Now normally this is the kind of free agent that would be too expensive for the Orioles to afford and they wouldn't go after him. But since he'll be 37 next season and makes his off season home in Monkton, MD, the Orioles are entertaining the idea of signing him. It's unlikely to take a long term commitment to do so and it's possible that it'll take only one year and at the most two to get it done. This tweet from Chris Cotillo confirms the Orioles interest:

Since it certainly seems the O's are interested, would it make sense for the Orioles to sign him? It's somewhat difficult to say without knowing his contract demands since the success of any free agent signing is largely dependent on the contract terms. But lets assume that Burnett desires a contract in the 1 year, $13 million or 2 year, $25 million range. I think that's reasonable for a 37 year old pitcher coming off of two good seasons. Other pitchers who are similar but not quite as good have signed slightly smaller contracts this off season like Bartolo Colon, Scott Kazmir, and Tim Hudson. Each of them got two years and $20-23 million.

So now that we have an idea of what it would take to sign him, let's talk about what kind of performance we could expect from Burnett. Here are his stats over the last three seasons.

You can see that 2013 was the best year he's had recently, and it might be his best year since his days back with the Marlins. His strikeout rate of 26.1% was actually the highest rate of his entire 15 year career. Though he had the highest strikeout rate of his career, his swinging strike rate of 10.6% was just over his career average of 10%. Even at 36 years old last season, Burnett definitely still has swing and miss stuff. Most pitchers his age experience a decline in velocity and have to modify the way that they pitch to adapt to the decreased velocity. Burnett has no such problem. 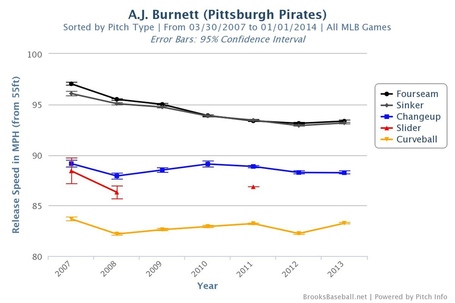 He certainly used to throw harder back in the early part of his career, but over the last four seasons he's maintained velocity on his fastball of 93-94 mph. Further, at the end of 2013 he was throwing over 94 which suggests that he's got more in the tank if he needs it. While the Pirates were in a pennant race in September, Burnett was able to throw harder than he had all season. Losing velocity wouldn't be something that the Orioles would have to worry about in the short term.

Jake Dal Porto wrote an excellent piece recently over at Beyond the Box Score stating that Burnett's sinker was responsible for his increased success the last two years with the Pirates. It's definitely worth checking out to get a feel for how Burnett's sinker has helped him over the last two years. But I'd argue that his curveball, well really his knuckle curveball to be exact, was more responsible for his success. While he threw his sinker just over 36% of the time, he threw his curve over 35% of the time in 2013. While throwing sinkers 36% of the time is completely normal, throwing a curve 35% of the time led the league in 2013.

While he's always thrown a lot of curveballs, he's progressively thrown more of them each year over the last four seasons. If he wasn't having success throwing the pitch it wouldn't make much sense to throw it that much. But Burnett is carving up hitters with it. 41.8% of the time a hitter swung at the pitch, they swung and missed. That's a phenomenal rate for a starting pitcher, 7th in all of baseball last year. He also had a 67.5% ground ball rate when the ball was put in play against it. For comparison, his sinker which is typically known for generating ground balls generated 58.4% ground balls per ball in play.

Here is batters line against him in 2013 when at bats ended with curveballs: .150/.189/.205. Pretty dominant. Here's his line when at bats ended with sinkers: .284/.365/.401. That's decent but not nearly as good as his results with his curveball. It's pretty clear that throwing more curveballs each season is having a positive effect on his results. As long as it doesn't cause any problems with his arm (it hasn't yet) this is a smart way to pitch on Burnett's part.

Burnett has been remarkably healthy over the past six years. He missed some time when a ball he tried to bunt hit him in the face and broke his orbital bone in the beginning of 2012. And he had a calf strain that forced him to miss a few weeks in the middle of the 2013 season, but other than that he's been pretty healthy. The important thing about staying healthy is the ability to pitch a large number of innings for the team year in and year out. He's pitched between 185 and 222 innings every year going back to 2008. The club that signs Burnett should reasonably be able to count on him pitching 190 innings or so in 2014.

For a club like the Orioles, being able to count on a starter to throw 190 or so quality innings would be a huge boost to the team. Right now, the 4th and 5th starters look like Bud Norris and Kevin Gausman. Beyond that, there is very little depth at the major league level. It doesn't seem like Mike Wright or Eduardo Rodriguez are quite ready yet. When the inevitable injuries to the rotation come, the Orioles don't have guys ready and able to fill in. Adding a starter would could pitch that many innings would take away innings from guys who frankly are not good enough to get starts in a major league rotation. If I could guarantee that signing Burnett meant that I'd never have to see Freddy Garcia in an Orioles uniform again, I'd argue to sign him for twice as much.

I don't want to overlook the impact of the transition Burnett would face coming from the NL Central to the AL East. The difference in the quality of the lineups and facing the DH instead of the pitcher is substantial. I would expect his ERA to rise accordingly. But this is a guy that's shown that he can be successful in the AL East when he pitched for Toronto from 2006-2008. It didn't work out for him in New York, and I don't quite have an answer for why not but I wouldn't expect him to all of a sudden fall apart by moving back to the tougher division and league. I would expect an ERA in the upper 3's.

I hope that Burnett decides that it's not time to hang up the spikes quite yet. This is a pitcher who's still got a lot of juice in the tank as we saw when he was throwing 95 mph last September and October. I understand the draw of spending time at home with his kids, and judging from his Twitter account he certainly enjoys this part of his life. According to his Wikipedia page, there are also some personal health concerns, but it's unclear how much they effect him on the field. You're only able to play Major League Baseball for so long. I hope Burnett decides to continue his career; and if he does I think the Orioles should end their off season silence and sign a pitcher that would dramatically improve the club.