It was the end of an era for Orioles baseball as the team took the field at Memorial Stadium one last time.

(Editor's note: This is the latest in an occasional series of retro Orioles game recaps that we are posting through the off-season. They are either games that were significant in O's history, or just significant to one of our writers. Today's game is the last Orioles game played at Memorial Stadium - Oct. 6, 1991.)

The end of the 1991 season couldn't come soon enough for most Orioles fans. Another 90-loss season was guaranteed before the last week of the season, and 1992 brought the promise of Oriole Park at Camden Yards near the Inner Harbor.

But Oct. 6, 1991 wasn't about the present, or even the future, it was about the past. The O's sold "I Was There!" pennants, fans traded stories of O's games past ("I saw Mark Belanger hit a home run off the foul pole! Only one he hit that year! No, not foul pole, home run!"), and everyone just wanted to take in the old stadium one last time. And it was a stadium, make no mistake. It wasn't a ballpark. That was waiting for us a few miles down St. Paul Street. This was a stadium, one of the last of its kind. It wasn't built to fit baseball and football, football was squeezed in. But it wasn't a baseball yard, either.

It wasn't downtown, part of the city's skyline. It was nestled into an honest-to-God neighborhood. You walked by houses, not offices and hotels, when you walked up to Memorial.  Residents made good money renting out their driveways for parking or you parked at the high school across the street or took the park-and-ride from Lake Montebello.

You walked on tree-lined sidewalks to get to Memorial, and not ones maintained by a horticulture company for a hotel. These were real lawns, with real lawn chairs and real bird feeders and some real beer cans on them.  It was the heart of living in Baltimore City for folks who wore their names on their shirts at work and came home, put their feet up, and watched the O's on TV, or maybe wandered over with a cooler full of beer.

The off-season was still one game away. It was the last game of a forgettable season that most in attendance wanted over as quickly as possible. But no one wanted it to truly end.

The game itself played out as much of 1991 had. Down four runs to the Tigers before they even took bats in hands, the Orioles would never seriously threaten in the game.  After Detroit starter Frank Tanana gave up a lead-off triple to Mike Devereux, the speedy CF was driven in on an infield groundout by Joe Orsulak. And that would be the extent of the Orioles scoring for the day.

Orioles starter Bob Milacki, given the honor of starting the last game in Memorial Stadium for the Orioles, didn't make it to the fourth inning. The four runs he allowed in 2.1 IP pushed his season ERA north of 4.00. He was the only O's pitch to finish with even 10 wins, or even more wins than losses among starters. He was the best choice for the start, and he couldn't get out of the third inning. That was 1991 in a nutshell.

As the game dragged towards its inevitable conclusion of an O's loss, the crowd paid less and less attention to the game and more to the surroundings. At least, I did. Standing in the absolutely last row behind home plate in the upper deck, I kept just looking around. It was a 65 degree day in October, the Orioles were losing, and it hit me - this would be the last time I would be here.*

The flags representing each American League team snapped behind me. I saw the simple orange "HERE" flag in left field, showing where Frank Robinson hit the only home run to completely leave the stadium. I looked for tomato plants in the left field foul territory, not sure if Pat Sanatrone's successor had kept up the tradition for this last season. Santarone had retired just before the 1991 season. Like the ghosts of Memorial Stadium, he wasn't heading south to the Inner Harbor.

But mostly, I and the crowd of 50,700 waited for the game to end and the celebration of the stadium to begin. The Tigers won, 7-1, and etched their 84th win of the year. Frank Tanana pitched a complete game to raise his record to 13-12. The actual result of the game was practically meaningless. Neither team was in postseason contention in 1991, as the Blue Jays won the division easily by seven games.

The only excitement left in the game was who would be the last pitcher to throw a pitch for the Orioles. Ideally, it would have been the last pitch thrown in Memorial Stadium, but the Tigers' first inning erased that possibility. And out came Gregg Olson took the mound to begin the ninth.

The Otter got the first out, getting a weak infield grounder on just three pitches, and then paused as manager Johnny Oates came to get the ball. The crowd rose, not just in appreciation for the work Olson had done for a God-awful team, but because we knew now who would throw the last pitch at Memorial Stadium for the Orioles - Mike Flanagan.

Flanagan had spent 1975-1987 pitching for the Orioles, and usually pitching pretty well.  But he was traded to Toronto in the Blue Jays' first serious push for the playoffs, which they didn't make. After the 1990 season, he re-signed with the O's, and now was taking the mound as the last O's pitcher to ever throw a pitch at Memorial Stadium.

And he threw some pretty good ones. He went 3-2 on Tigers 1B Dave Bergman, then got him out swinging. Shortstop Travis Fryman worked a full count as well, but fell to the same result - a swinging strikeout. Flanagan walked off the stadium mound one last time, and the crowd roared.

Unfortunately, the game still had one-half inning left to play, and there wasn't much suspense to be had. Tanana continued his domination of the Orioles on the day, striking out Devereux (who reached 1B on a passed ball), inducing weak flyball to CF by Orsulak, and getting the game- and stadium-ending double play off Cal Ripken, Jr.  And just like that, 5-4-3 in the scorebook, the Orioles had played their last game at 33rd Street.

No one in the crowd knew what the Orioles hand in store for a stadium send-off, but wanted something special. The team did not disappoint. The grounds crew, changed into white tuxedos, dug up home plate, placed it into an on-field limousine, and drove it to Camden Yards. It was a bit comical, but fitting - a part of the old stadium would travel south to the new one, and was treated like a Baltimore heirloom in transit. The left field foul pole would make the journey as well, and continue to have a place in Orioles history even in its new home.

And then the players of Orioles teams past started making their way onto the field. Most fans expected to see the stars of old Orioles teams. And when Frank Robinson, Brooks Robinson and Jim Palmer trotted out to their old positions on the field to the music of the Field Of Dreams, it seemed right.

The players kept coming. And coming. One hundred and nineteen of them in all, Orioles greats and Orioles barely remembered took their places at the positions where they had played over the course of the 38 years Memorial Stadium served as the Orioles home.  Rick Dempsey led an Orioles cheer, Earl Weaver came out last to thunderous applause, and Auld Lang Syne played to conclude the ceremony. Fifty thousand people sang along.

Eventually, as the sounds of Rex Barney's tape-recorded video message: "THANK YOU!" echoed for the last time off the concrete of the stadium, fans began to wander out. Some tried taking souvenirs, but in a stadium made of concrete, there's not much easily taken. A few paint chips, maybe, but mostly memories.

Memories of pennants, of World Series, of Earl Weaver chewing out another ump, of Brooks Robinson diving to his right, of Jim Gentile and Boog Powell and Eddie Murray jacking homer runs, of Jim Palmer, Dave McNally, Mike Cuellar, Pat Dobson, Steve Stone, Mike Flanagan, Scott McGregor and Gregg Olson throwing strikes and Cal Ripken playing every day just as hard as his daddy brought him up to.

Oriole Park at Camden Yards is, in just about every measurable way, a better ballpark. It's much more accessible by car and mass transit, it has actual urinals in the mens' room instead of the dreaded trough, better sight lines, better food and better parking. 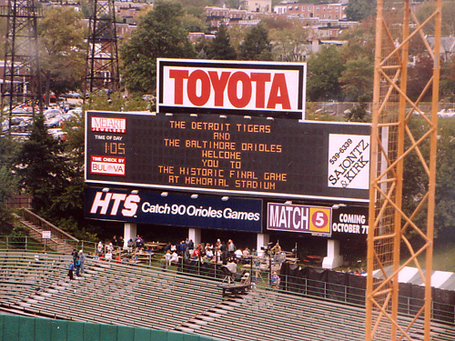 *In retrospect, it wasn't my last trip for baseball to Memorial Stadium. When the Bowie Baysox moved to town, they used Memorial Stadium for a season. It wasn't well-maintained after the O's left, and no one was going to spend money to refurb it for one season of MiLB ball. It looked drained of life in my last trip back, and empty as a mausoleum, and I have always wished, to some degree, I'd never made the trip, and kept my memories of Memorial Stadium ending on Oct. 6, 1991.