Who are the Orioles Getting in Ubaldo Jimenez?

The Orioles officially signed Ubaldo Jimenez to a four year, $50 million contract on Wednesday. Jimenez is typically portrayed as someone who has been up and down over his career. Just how good is he?

Share All sharing options for: Who are the Orioles Getting in Ubaldo Jimenez?

Now that the Orioles have officially signed Ubaldo Jimenez to a four year, $50 million contract, it's time to find out just what the Orioles are getting. We chose to wait for Ubaldo to pass his physical before posting this piece to the site. Unfortunately, that's now something we actually have to do since the Grant Balfour and Tyler Colvin fiascos.

Here at Camden Chat, we've already covered a number of different aspects of the Ubaldo Jimenez signing. Mark covered the initial report of the signing, knews of which was broken by Roch Kubatko of MASN. J.Q. let you know what everyone else on the internet thought of the move with the Transaction Scorecard. Next, Mark looked at the history of the 17th pick in the draft to see whether the Orioles will regret giving up the draft pick in order to sign Jimenez. Finally, Stacey looked at whether the Orioles should sign another free agent this offseason since they have already surrendered their first round pick. We've covered most of the angles of the signing but let's cover one more; let's talk about who the Orioles are getting with this foray into the free agent market.

Ubaldo started his career as a fireballing right handed pitcher in the Colorado Rockies system getting his first real action in 2007. He was good for the Rockies, especially when you consider how hitter friendly Coors Field is. He also had that one magical year in 2010 when he finished third in the National League Cy Young voting with a 2.88 ERA. He wasn't able to maintain his success from that season and he was traded to the Indians at the trade deadline in 2011. For the next two years with the Indians, Jimenez really wasn't very good. He had a 5.10 ERA after the trade in 2011 and put up a depressing 5.40 ERA over a full season in 2012.

Here are his career stats so you can get an idea of just how his career arc has looked so far.

When you look at his career stats, a few things jump out. He has always struck out and walked a high percentage of batters. He actually struck out the largest percentage of batters of any year of his career in 2013, which portends well for the future. Early in his career, he was in the elite range for forcing ground balls but over the years this skill has eroded to the point where he only forced 44% ground balls last year, which is slightly below average. Also, you can see that his ERA has bounced around throughout his career while his FIP has stayed in a pretty small range. It's been between 3.10 and 3.83 every year except 2012 over the past six seasons. Despite the consistency of his FIP, he has changed since his younger days when he was an elite ground baller on top of the strikeouts.

Jimenez is no longer the same pitcher he was when he first came up. Back then, he averaged 96 mph on his fastball which is a far cry from the 92.3 mph he averaged in 2013. Here's a graph from Brooks Baseball showing just how much velocity he's lost over the years. You can see the biggest decrease came between 2010 and 2011. 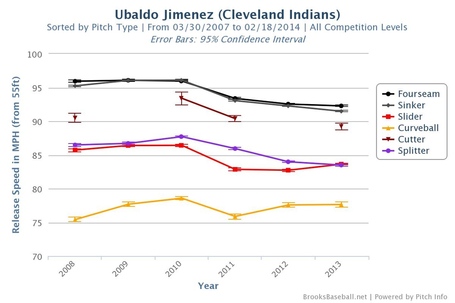 The common story you hear with Jimenez is that he had a great second half of 2013 or even a great last eight starts against inferior competition. Granted, he did face the Twins and White Sox twice each down the stretch. But what you don't hear about nearly as much is that the bad part of his season was actually concentrated in three starts in April. If we remove his first four starts (maybe he was building up arm strength or working on improvements to his mechanics), his seasonal totals for 2013 look absolutely fantastic. He would have had a 2.61 ERA with 9.7 K/9 and 3.75 BB/9. He was otherworldly down the stretch, that's true. But he was really good from April 29 on last year.

Speaking of his mechanics, his are most definitely not the prettiest you'll find. He has an awkward downward stabbing motion just before he prepares to raise his arm to throw, which can't help matters. Doug Thorburn of Baseball Prospectus has analyzed him in great detail over the last couple of years and they're worth checking out if you have a subscription. He focuses on Ubaldo's poor posture and lack of functional strength to name two major problems with his delivery.

Mechanics have always been a problem for Ubaldo, but last year he worked with new Indians pitching coach Mickey Callaway and something seemed to click for him. Callaway worked with him on fixing his stride, the pace of his delivery, not opening his hip and shoulder early, and his posture. Sounds easy, right? The results speak for themselves. In 2013, Jimenez was a different pitcher than he was in either 2011 or 2012. The Orioles have to hope that Dave Wallace can keep Jimenez's delivery on the same track that Callaway and the Indians were able to. Mechanics are important for every pitcher, but even more so for a pitcher with a delivery as complicated as Ubaldo.

One of the benefits of better mechanics when everything is aligned properly is improved velocity. During the season last year, Ubaldo increased his velocity as the season went along. Many pitchers increase their velocity into August and then falter in September as their arms get tired. If you look at major league pitchers as a whole, this is what you'll find. But Ubaldo got stronger over the whole season finished the season throwing well into September.

The Orioles are betting that the changes he made to his delivery in Cleveland last year will stick with him when he moves on to Baltimore.

As pitchers get older, they tend to add more pitches to their repertoire. Often times, you'll see a young pitcher arrive from the minors with three pitches: a fastball, a breaking ball, and something offspeed. One of the benefits of signing a pitcher that has been around for a while is that he's had time to develop other pitches. Jimenez has been around long enough to work six full pitches into his repertoire. He started throwing a cutter a little bit last year, but relegated it to only 1.42% of his pitches. He also throws a four seam fastball, a sinker, a curveball, a slider, and a splitter. Thanks to Brooks Baseball, we have the following. 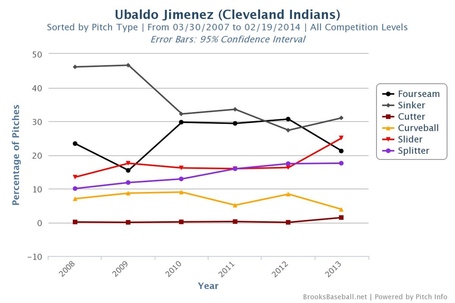 As he's gotten older (and hopefully wiser) he's decreased the use of his fastball and sinker, while increasing the usage of his slider and his split finger. Considering he generates the most whiffs on those two pitches, it's a good decision on his part. It's also an admission that he's not throwing 95-96 mph any more.

As you saw in his statistics above, Ubaldo has been a very durable innings eater for his teams (I'll wait for you to check, don't worry). For each of the last six years, he's made at least 31 starts. Considering that the best precursor to an injury in the future is a past injury, it's a good sign that he hasn't had a major injury in his career. It may also be the reason that he was able to pass the Orioles physical. While he hasn't been injured, he's not a pitcher that works extremely deep into games. Over his career, he's averaged just about six innings per start.

If you were hoping that Jimenez would come in and save the bullpen every five days, that's not exactly the guy the Orioles are getting. However, if you were hoping that the Orioles would be getting a good pitcher who was coming off either the best season or the second best season of his career, one that says that he has finally mastered a complicated delivery, you'd be in luck. There is a fair amount of risk involved in signing any pitcher to a four year contract but the more I look into Jimenez, the more there is to like. The Orioles are absolutely a better team than they were a few days ago. While the Orioles didn't sign the ace much of the fan base clamors for, they signed a darn good pitcher.