The Orioles announced their 2014 promotions and giveaways on Monday. Mixed in with the usual boring assortment is a couple of cool ideas, including a Chris Davis action figure (kids only), and a Wild Bill Hagy cowboy hat.

The Orioles are literally the last team to unveil their 2014 giveaway schedule. They finally did so on Monday afternoon. If you were expecting nothing more than the usual boring assortment of t-shirts, hats, and bobbleheads, you won't be disappointed. There are a handful of interesting additions beyond the usual, though, as well as several 60th anniversary-themed giveaways through the season.

First and foremost, this:

That is a Chris Davis Superman action figure. For as much as I've knocked the Orioles for boring promotions, that is something that's different and cool. Sadly, none of us should get too excited for our chances of getting it, because it's only being given away to the first 10,000 fans 14 and under on August 2. Way to come up with a unique giveaway for the first time in forever and manage to still screw it up, Orioles. Oh well.

There will be a t-shirt giveaway at least once per month, with eight total giveaways. Six of these will be given to every fan in attendance: April 30, May 13, June 11, July 9, August 27, and September 17. These giveaways are currently labeled the excitingly descriptive "Orioles T-Shirt" and have no pictures attached. They are also all on either Tuesday or Wednesday night games. Do you think they will optimistically print 40,000 of each shirt?

Look, I'm not going to lie. I need a Wild Bill cowboy hat in my life. So do you: 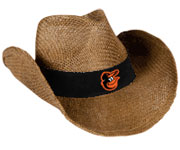 Let's not forget about the bobbleheads. This year, there will be three: Manny Machado on June 7, Adam Jones on September 1, and the Fans Choice bobblehead on September 21, which is the last home game of the year. Those will all be given to the first 25,000 fans 15 and over.

In addition to the action figure, there are a couple of kid-only giveaways. Those are an Oriole Bird plush pillow on June 14 and a kids jersey on August 31. I think that there are a lot of grown-ups in Birdland who would like an Oriole Bird plush pillow as well, but you're going to be out of luck. On the bright side, there seems to be a never-ending supply of joyless misers who will happily swipe all the giveaways they can and put them on eBay, so you can always feed that beast if you really need one.

This is the ripcord bracelet: 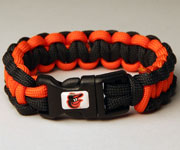 I am not a bracelet person, but maybe you are.

Do you like fireworks? There will be fireworks on Friday nights once every month. Those dates are: April 25, May 23, June 13, July 3, August 8, and September 19. The August 8 date is part of the 60th anniversary celebration and will feature many Orioles greats from the team's past in attendance. There will also be a laser show along with the fireworks.

So there you have it. What do you think?