Worries about the worst case with the 2014 Orioles

Yesterday, Steve told you why he was hopeful for the upcoming year. Now it's time to face reality and realize what will possibly end up being soul-crushingly terrible about the 2014 Orioles.

Share All sharing options for: Worries about the worst case with the 2014 Orioles

Abandon all hope, ye who enter here. The good times are coming to an end.

The signs were there last year; in spite of historically-good defense and franchise record-breaking home runs from Chris Davis, the team could not keep up in the standings. Ending up with 85 wins was nice enough, but the team was not in any realistic hope of contending in the season's waning days. They flushed away fringe prospects, international pool money, and a draft pick to preserve the illusion of contention for fans.

Now it's time for the next season. The Orioles will start out missing the biggest part of that incredible defense, third baseman Manny Machado. He'll open the season on the disabled list. There's always the question of how well someone will come back from a knee injury. He may never be the same. When he comes back, his bat may never develop the way we hope, leaving his value tied entirely to defense that relies heavily on that shaky knee for quick reactions.

Reasons to believe in the 2014 Orioles 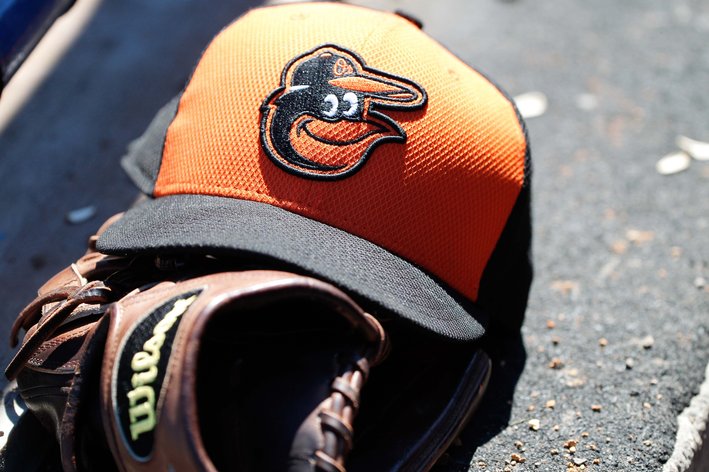 Be honest with yourself. Where is that rotation getting a team? The teams that advanced deep in last year's postseason had power arms with ace stuff. That's five guys for whom the optimistic scenario is league-average starter. A couple could reach that modest ceiling. The rest will pitch just well enough to lose, at best. That's assuming everyone even stays healthy, which they won't, because it's not in the nature of pitchers to stay healthy.

Jimenez, in particular, could be a disaster waiting to happen as the guy who's now gotten the longest and largest free agent contract the Orioles have ever given to a pitcher. We are not yet 18 months removed from a season in which he had an ERA above 5. His career walk rate per nine innings is 4.0, and he's getting $50 million over the next four years.

Once some of those guys get hurt or suck, we will get a second chance to experience the depth of the Orioles rotation. As with recent years, the depth is similar to quicksand in that once you experience it, you are dead. Steve Johnson, T.J. McFarland, and Josh Stinson are not depth. They are not guys who will make big starts for a team that makes the playoffs. They are filler for a mediocre, forgettable team, which is what this year's Orioles would become after significant innings are logged by pitchers of the ilk of those guys - or Zach Britton, or Brian Matusz, other names mentioned as "starters" during spring training.

Sure, there's top prospect Kevin Gausman, who looks like he'll be awesome, but that's what everyone thought about Matusz too, and now he's a reliever. Gausman has to develop that slider, and he won't, because Orioles pitchers don't do that. They only disappoint you. Glasses or not, the command will never emerge, he'll give up home runs like they go out of style, and he'll probably get hurt just to make it even worse.

On the subject of hurt pitchers: Dylan Bundy. He will never be the same either. Search your feelings. You know it to be true. If he does heal, then Dan Duquette's pecuiliar anti-cutter doctrine will rob him of his best pitch and he will just be another dude instead of hope for the future. This cannot be helped and you might as well accept it for now. There is no hope for the present and the present will kill your hope for the future.

The Orioles won't be able to draft anyone to start replacing the next wave of failed prospects until the third round this year thanks to the assorted free agent signings and trades making them forfeit picks.

Tommy Hunter is bound to fail as the closer. The reason for this can be found in these numbers: .294/.322/.535. That's how left-handed batters hit against Hunter last season. He gave up eleven home runs, all to lefties. He cannot get them out. That's what he will face. You'll wish they'd kept Jim Johnson after all, $10 million price tag and all.

They spent that money, in part, on Nelson Cruz, who missed 50 games last season because he was suspended in connection with baseball's Biogenesis investigation. What's left now that those are gone from his system? Now he's just a poor defender with a questionable bat, and it looks like Showalter is going to throw him into left field in spite of that. Are you ready for the next coming of Vladimir Guerrero in the middle of every lineup? Me too.

As for the rest of the lineup, Davis isn't hitting 53 home runs again. He might not hit 40. He'll return to something like 2012's .270/.326/.501, which is nice enough, but isn't carrying a team anywhere. Matt Wieters has failed us for the last time. Actually, it wasn't the last time, because he has two more years in an Orioles uniform before he goes and gets overpaid by someone else, or worse, by the Orioles.

J.J. Hardy cracks above the Belanger Line (.300 on-base) in a good year. Nick Markakis just slugged .356 last year and it doesn't matter how good anyone looks in spring training because they'll probably go back to being terrible when they face real competition again. Or even worse, he'll be just good enough to trick them into picking up his $17.5 million option for 2015, at which time he'll go right back to being awful and going whole calendar months without getting an extra-base hit.

While all of this is going on, we will all have to bear the barrage of references to the Red Sox and their Satanic luck as the defending World Series champions, and maybe even success that gets all the press - more than the 2012 Orioles ever got - from the hat-switching bandwagoning contingent not far to the south and west of Baltimore.

There, now that's out of my system. That feels better. It's true that there's a lot of uncertainty about how this team will perform, and some of these things may go wrong. Others will go right, better than anyone ever expected. I'm tired of talking about what might happen and ready to find out what will. Bring on Opening Day. I'm looking forward to what should be a fun year. Hopefully it doesn't suck.

What are YOU worried about for this year? Cleanse that bad juju. Now is your chance.