Brian Roberts was the face of the Orioles during the dark years, and he comes in at #13 on our list.

Share All sharing options for: Top 40 Orioles of all time: #13, Brian Roberts

There is little to be said about Brian Roberts that hasn't already been said on this site recently, as we have written five posts about him since September 27th, more than any Oriole other than the newest additions. I'll give it a try, though.

Until he became a free agent in October, Brian Roberts had been for quite some time the longest tenured Baltimore Oriole. In his rookie season of 2001, he was a teammate of Cal Ripken Jr. That's how long we rooted for Brian Roberts.

Most Orioles fans will remember that the big debate in the early 00s was over Brian Roberts or Jerry Hairston for second base. In 2003, Hairston got most of the early season starts at second, but by the end of the year the position belonged to Brian. It was that season (I think, I can't find confirmation online) that the Baltimore Sun was including posters of players in their weekend paper, and this one arrived on my doorstep: 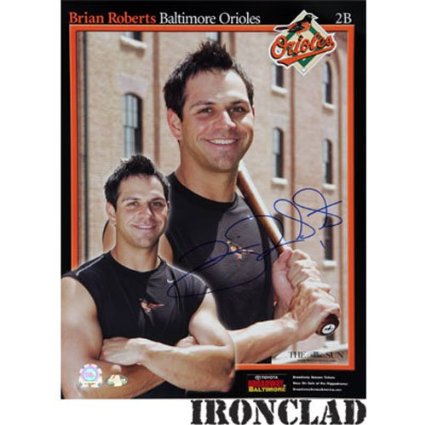 That may have been when he became my favorite player. My roommate and I loved that poster and hung it on our refrigerator. I mean, wasn't he just the most adorable thing you've ever seen?

Having finally beaten out Hairston for the job, Roberts played in 159 games in 2004. He settled in as the leadoff hitter, and he was good at it. He only hit four home runs that year, but he had the first of three career 50-double seasons and an on-base percentage of .344. He hadn't quite grown into his base stealing yet as he stole 29 but was caught 12 times.

We all remember 2005 Brian Roberts. His power finally blossomed and he had a career year. He hit 18 home runs to go along with 45 doubles and made his first appearance in an All Star Game. Brian never came close to having another season like 2005, and sadly it was cut short by an injury on September 20th, as a collision with New York Yankee Bubba Crosby that basically ripped tendon from bone in his left elbow. The season had been crumbling around the Orioles for awhile, and seeing Brian on the field, clutching his arm in pain the worst way to end a bad season.

Though his power never approached his 2005 numbers again, Roberts still had a few tricks up his sleeve. After missing the start of the 2006 season and being limited to 138 games, he still hit 34 doubles. He also stole 36 bases while being caught seven times, the start of a multi-year stretch where he was the toughest Oriole to get out on the basepaths. From 2006-2009, he stole 156 bases and was caught just 31 times, good for an 83.4% success rate.

In addition to his stolen bases, Roberts of course was known for being a doubling machine. He had three fifty-plus double seasons and from 2004-2009 his only season with less than 42 was the year he missed time recovering from his elbow injury. His 351 doubles as an Oriole is fourth in franchise history behind Cal Ripken, Brooks Robinson, and Eddie Murray, which is pretty impressive company to keep.

As long as we're talking ranks, here are some of Brian's, accumulated over his thirteen-season Orioles career: He is 10th in games played, 7th in walks, and 2nd in stolen bases. Brian Roberts was a very good Oriole.

For as much as he did on the field, Brian will be remembered by many for the kindness he showed off of it. Born with a heart condition that required surgery as a child, Brian never forgot what it was like to be a sick kid. He was a regular at University of Maryland's Children Hospital, spending time with the kids and giving them the thrill of getting to meet a big league baseball player. He raised money for them every year with Brian's Baseball Bash, which brought out many of his teammates for the festivities. I don't think it would be unfair to say that the community might miss Brian more than the team will.

The final four seasons of Roberts' Orioles career were, as you know, disappointing. He suffered through multiple injuries, the most serious of which was a concussion, the side effects of which kept him off the field much longer than anyone anticipated. It was scary at times seeing a listless Brian in the dugout and hearing Buck Showalter say that first they have to make sure Brian is able to live a normal life before they consider his baseball career.

Thankfully, Roberts was able to come back healthy and looking good for 77 games to end the 2013 season. I say thankfully because I'd hate for our final impression of him to be him looking like a shell of himself in the dugout. He didn't do much at the plate and he'd lost a step in the field, but it was still good to see him.

The Orioles didn't show much interest in bringing Roberts back for the 2014 season, and that's fine. It's disappointing that he won't end his career as an Oriole, having signed a one-year contract with the New York Yankees, but he'll always be an Oriole to me.

Look for Brian Roberts to be inducted into the Orioles Hall of Fame not long after he retires from baseball, because he is truly one of the finest to have ever donned an O's uniform.