An in-depth look at the logo and uniform history of the Baltimore Orioles.

Share All sharing options for: Orioles logo and uniform history

After 52 years as the St. Louis Browns, the baseball club currently known as the Orioles moved to Baltimore in 1954. Adopting their name and colors from the state bird of Maryland, the Orioles have had varying degrees of success since moving to the Charm City.

The organization's most sustained period of success, including three World Series Championships, came with the Cartoon Bird on their caps, and after 14-consecutive losing seasons, the return of the beloved bird has brought the magic back to Camden Yards. With the help of Chris Creamer's Sports Logos and the Orioles logo page, I have compiled a complete hat logo and uniform history for the O's.

For the Orioles' first nine seasons, this realistic-looking bird adorned the team's caps. Baltimore managed only two winning seasons under this logo. 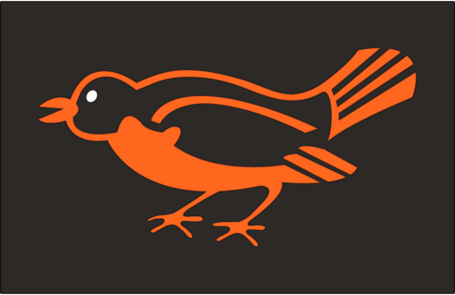 The only season in team history that Baltimore's cap was bird-less, the Orioles were above .500, but finished the season 18.5 games behind American League Champion New York. 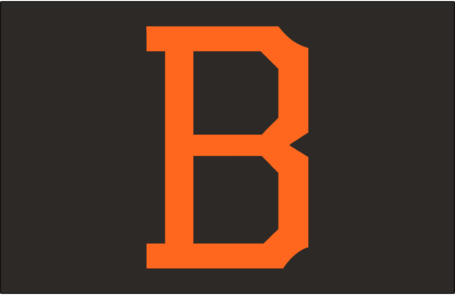 After one season without, the bird returned to the Orioles' cap. Finishing both seasons above .500, Baltimore won a then-franchise record 97 games in 1964. 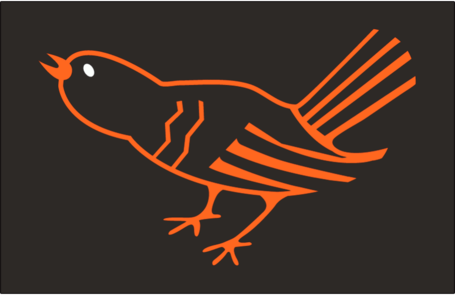 While this logo had many adaptations during its 23 seasons on the Orioles' cap, the Cartoon Bird is associated with the most successful period of Baltimore baseball. The Orioles had 19 winning seasons, including seven trips to the American League Championship Series, six pennants, and three World Series Championships. During this span, the O's were the winningest team in baseball. 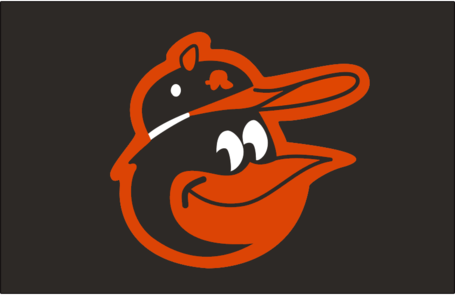 Going into the 1990s, the Orioles removed the Cartoon bird from their caps in favor of another realistic-looking bird. Outside of a pair of ALCS losses to the Yankees and Indians, respectively, the ornithological bird has been associated with failure. 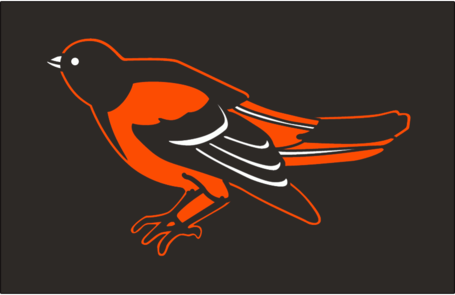 Like its predecessor, the lifelike bird does not have the best track record. In the 10-year span that this bird was featured on the team's cap, the Orioles failed to record a winning season. 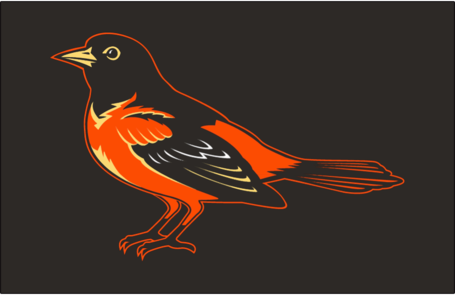 Although the changes may seem slight, this simplification of the Orioles' lifelike logo removed any color outside of the team's orange, black, white, and gray scheme. This update also modified the bird's upright stance. 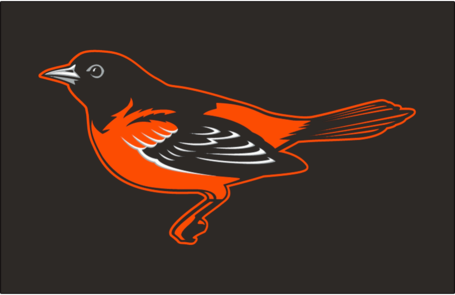 Baltimore introduced a modernized version of the Cartoon Bird as the team celebrated the 20th anniversary of Oriole Park at Camden Yards. The logo, which combines elements from the original Cartoon Bird and the O's current alternate cap, seemingly brought new life to a long-suffering franchise. In the first season with the updated logo, the Orioles finished above .500 for the first time in 14 seasons, as well as won the inaugural Wild Card Game. The following season, the team failed to make the playoffs, but finished above .500 for the second-consecutive year. 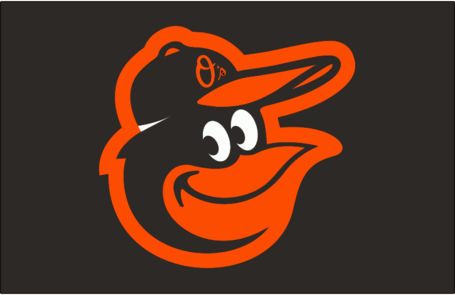 As you would expect in 1954, the Orioles’ first uniforms were quite plain. Both the white home uniform and the gray road jersey were devoid of any piping, featuring only a slanted script "Orioles" across the chest. The sloppy script was the epitome of the new franchise that would go on to lose 100 games in its inaugural season. 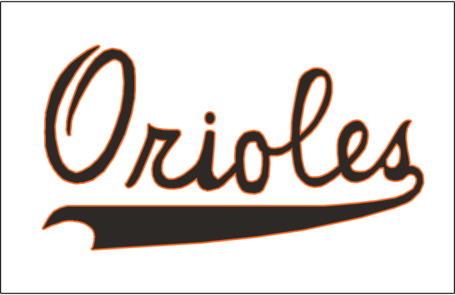 The following season, the Orioles improved their look by adding piping to the collar and sleeves of the uniform, as well as replacing the script across the chest with a different font. This uniform featured The Shoulder Patch Bird, the predecessor to the Cartoon Bird. 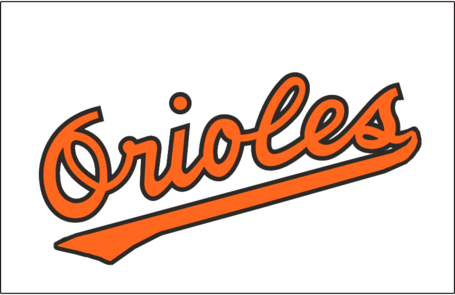 In 1956, the Orioles replaced the team nickname on the uniform with the city name, Baltimore, in a slanted script across the chest. The jerseys remained virtually unchanged, except for the addition of numbers to the front of the uniform, through the 1962 season. 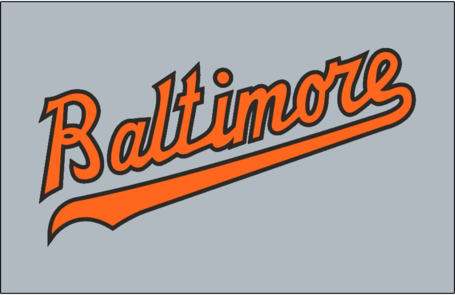 The following year, the team decided to simplify its look. The Lead-Off Bird was removed from the cap in favor of the letter "B" and an arched, block "Orioles" replaced the script across the chest of every jersey. Luckily, this generic look did not last long in Baltimore. 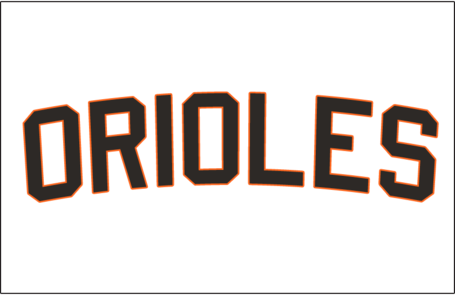 The script wordmark was restored to the Orioles’ uniform in 1966, just in time for the team to capture its first American League pennant and eventual World Series Championship. Although there would be slight variations in the shade of orange used by the Orioles, the Cartoon Bird, and the piping on the uniform’s sleeves, this look would remain constant for the next two decades. 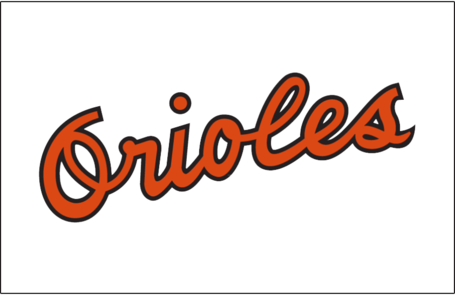 In 1971, the Orioles introduced their first alternate uniform. The all-orange uniforms, pants included, were worn during the season that produced a quartet of 20-game winners for Baltimore. The team experimented with pullover jerseys, as well, during this time period, but the look remained the same. 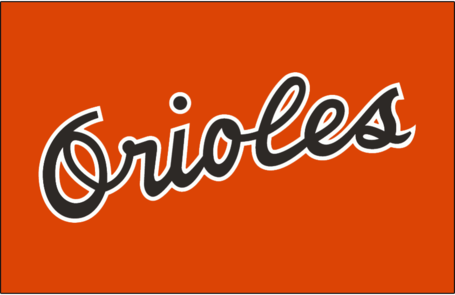 When the Orioles decided to ditch the Cartoon Bird for the Ornithologically Correct Bird, a new set of uniforms came with it. From 1989 through 1994, the Orioles uniforms featured an updated script, as well as new piping on the sleeves. The piping was similar to the Orioles’ current uniforms, with a black-orange-black pattern on the white jersey. 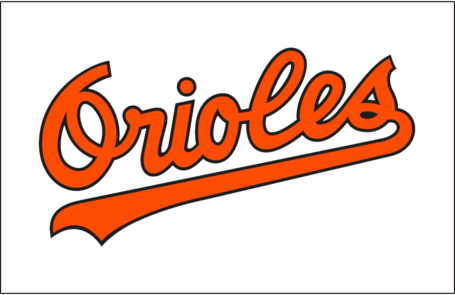 Already wearing a black uniform for batting practice, the Orioles decided to make it an alternate for the 1993 season. A black jersey has been the team’s Friday night alternate ever since. 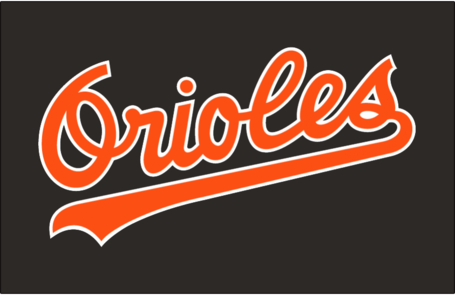 In 1995, the Orioles seemingly rounded off the "O" and thickened the font in the script across the chest. The colors of the script were inverted, as well, marking the first time in almost 30 years that the wordmark was black with an orange outline. 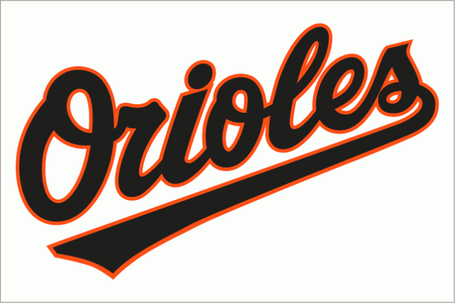 A slight modification is made to the Orioles uniform in '98, as the script is made thinner than the previous version. This change is in conjunction with the update to The Lifelike Bird on the cap. 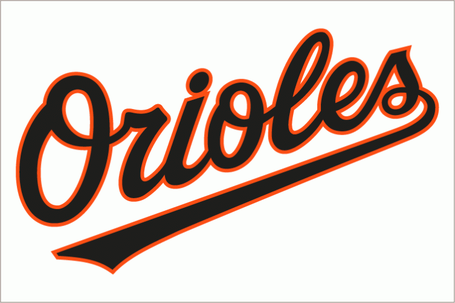 During the 1999 season, twenty teams throughout Major League Baseball elected to wear uniforms in a futuristic style. For one game, the futuristic Orioles dropped orange from the color scheme, leaving only a white workmark on a black uniform. 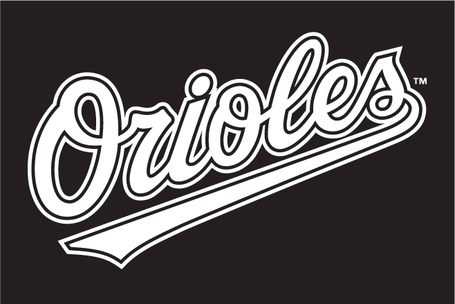 Fifteen years after the colors were inverted, the script on the Orioles home white uniforms returned to orange with a black outline. This change made the uniforms aesthetically pleasing, as the wordmark matched the numbers on the uniforms. 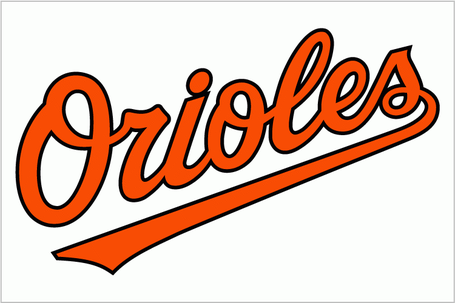 Based upon a desire to celebrate the great teams of the past, the Orioles made a well-received change to their road uniforms in 2009. The script "Baltimore" made a return to the birds’ road jersey for the first time in almost 40 years. 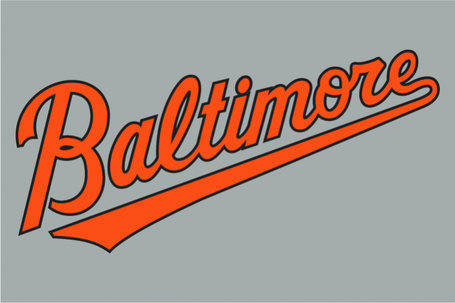 Along with The New Cartoon Bird, the Orioles unveiled a new orange uniform that has been worn during Saturday home games throughout the season. Not only was the 2012 season the 20th anniversary of Oriole Park at Camden Yards, but marks 20 years since the Orioles donned orange uniforms. 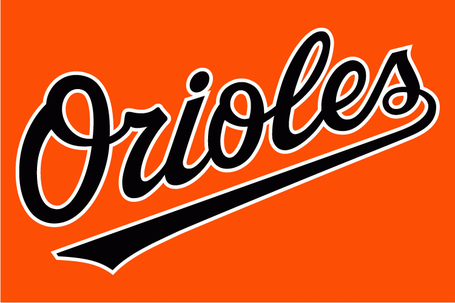