Chris Davis has yet to go yard. What's going on?

Through Friday's games, Chris Davis had just a 96 wRC+. His slash line was .297/.333/.378. The first two numbers are acceptable given what we know about Davis, but the third one is out of character for him. More interesting is the fact that he hasn't hit a single home run yet.

There are a few reasons to stay calm. First, we're only two weeks into the season. Plenty of hitters are doing unexpected things in this tiny sample size, and those unexpected things are often extreme. Chris Davis's power outage is no different than Emilio Bonifacio hitting .435/.480/.500. Pick any two-week period during the year and you'll find some hitters doing something out of character.

Second, Davis created unrealistic expectations last year. He was very lucky through April and May of 2013, particularly on his percentage of fly balls that went for home runs. In the past 20 years only Ryan Howard sustained a HR/FB rate over 30% for more than one year. That’s one batter out of thousands! Expecting Davis, who ended the year with a 29.6% HR/FB rate, to sustain that rate was unrealistic.

But "everyone else sucks too!!" and "it’s luck!" don’t tell the whole story. Pitchers have adjusted to Davis and he hasn't adjusted back. Look at where teams pitched him for the first two weeks of 2013: 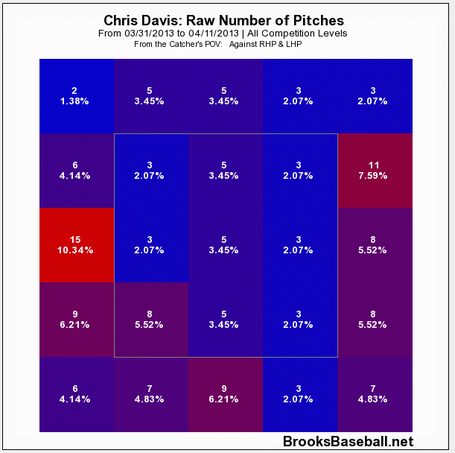 They were trying to jam him inside and make him chase middle-away. Now look at how pitchers are treating him in 2014: 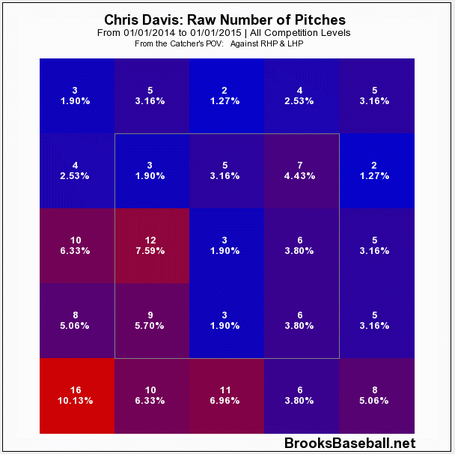 No one’s coming inside anymore. They learned he can turn on those pitches and hit them out. Now they're working him almost exclusively down and away, with an emphasis on down. So although Davis is hitting plenty of line drives (27.6%) and fly balls (41.4%), he’s pulled only 10% of those fly balls, instead of the 20% he pulled last year. It’s good that he’s trying to go with the pitch, but it means trading home runs for singles, line-drive doubles, and flyouts to left field.

Davis is probably champing at the bit to yank a pitch over the right-field fence and get off the schneid. The following graphs are of a small sample size, of course. But look at how much more he's swinging at offspeed pitches this year: 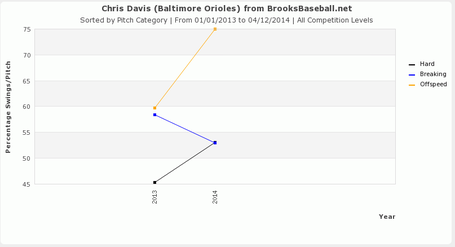 Unfortunately when he does swing, he misses half the time: 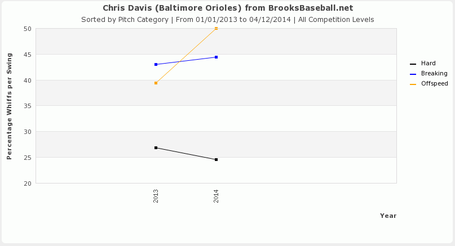 As a result, he's putting fewer offspeed pitches into the air: 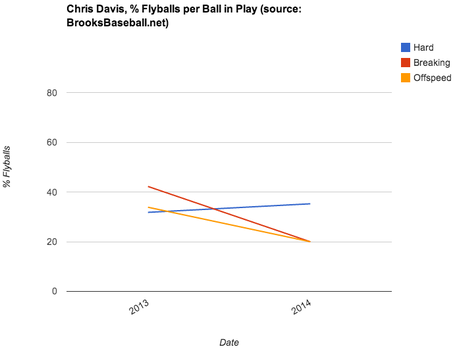 His flyball rate has remained steady only because he’s launching a few more fastballs in the air. But he’s also been hitting more infield flies than ever before. His IFFB% rate this year is 8.3%, well above his career norm of 4.1%. The explanation for this drastic increase is almost certainly luck. He’ll stop hitting fly balls over the infield soon enough. It’s also worth noting that in April of 2013, Davis didn’t hit a single infield fly.

Davis's dingers will come. On Friday he would’ve had two solo shots if not for the wind blowing in at OPACY. But he’ll have to adjust to how pitchers view him in order to stay afloat. The Davis of 2013 probably isn’t coming back, at least not this year, but he’s got plenty of time to prove he can mash.