Can the Orioles win their second consecutive series? Let's hope the good Ubaldo shows up.

So, last night was... pretty exciting, perhaps unnecessarily so (see: missed checked swing call) but the Orioles turned out victorious nonetheless. Today, the Birds look to take the second consecutive series versus the Blue Jays as Ubaldo Jimenez (not off to a good start) goes against Mark Buehrle (definitely off to a good start).

The veteran crafty lefty is off to an unusual start - Buehrle has struck out 14 in 14 IP and allowed only an ER so far in this young season after only striking out 5 in 15.1 IP in the Spring Training. You can attribute a lot of the hot start based on his first start against the Rays, in which he pitched a monstrous one - 8.2 IP, 4H, 0ER, 1BB and 11 K's. On his second start versus the Astros, we saw more of a classic Buehrle game - 5.1 IP, 8H, 1ER, 1BB and 3 K's. That being said, I don't think he's a type that can sustain a 9.00 K/9 and 7.00 SO/BB rate for a long time, but the Jays have themselves a starter that can go out, throw strikes and be basically a model for pitcher health. The good news for the Orioles is that the current hitters have hit Buehrle like an All-Star hitter - a .902 OPS, which is higher than Josh Hamilton, David Wright, Hanley Ramirez, Robinson Cano or Troy Tulowitzki's career OPS. Chris Davis, who is in a bit of a power funk lately, has a 1.324 OPS with 2 HR's in 14 AB's versus the lefty, Adam Jones has a 1.049 OPS versus in 23 AB's, Delmon Young has 3 HR's and .982 OPS in 42 AB's and Nick Markakis has a 1.211 OPS with .447 average and 2 HR's in 38 AB's, which is quite impressive. However, Nelson Cruz has yet to earn a hit against the Jays starter after 14 AB's and Hardy is only 3-for-22 against.

It's only been two starts but what we've seen from Ubaldo has not been encouraging. 8.44 K/9 is good but 6.75 BB/9 and 1.69 HR/9 are undesirable and tells us that he's been either 1) leaving pitches up in the zone or 2) not throwing strikes consistently... the answer is both. 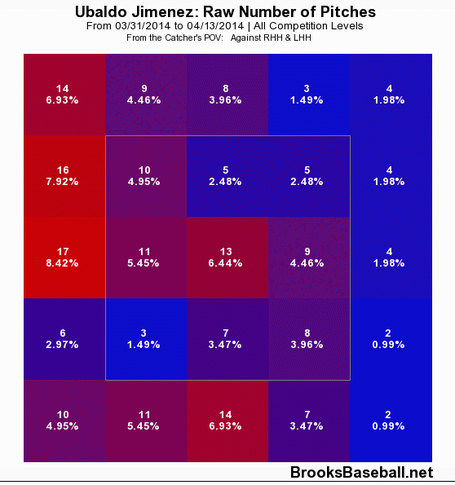 As you can see, the areas that his pitches went the most are either outside of the strikezone or on the middle of the plate. A good amount of pitches outside of the zone, I'm pretty sure, are the results of Jimenez trying to lure for a swinging strike, but they haven't been as fooled as Jimenez was capable of (7.8% swinging strike rate in 2014 as opposed to 8.8% last year). This is not the starter that the Orioles have expected when they gave out the 4-year $50 million contract few months ago but the good news is that the season is still really young and Ubaldo will be given time to make adjustments and he could still end up with a solid 2014. But it would be good to make the necessary changes as soon as possible. Ubaldo has not been that bad nor spectacular against the current Jays hitters - a .250/.323/.446 line. He's actually been unusually strong versus Jose Bautista - Ubaldo only allowed a hit in 19 AB's faced. (Even better news? 11 of those 19 AB's came after Bautista's breakout 2011) Colby Rasmus has hit him well with .968 OPS in 24 AB's and Maicer Itzuris is 4-for-8 with a homer and a double against the righty.

Steve Pearce is in the lineup today as a DH- he is 1-for-2 versus Buehrle in his career. I'm guessing it has to do that he's a right handed bat and that Nelson Cruz is 0-for-14 against the lefty. No weird surprises in the O's lineup besides that. Enjoy the Sunday afternoon game, folks!