How has Zach Britton Transformed Himself as a Pitcher?

Zach Britton has been a revelation so far this season. How has the failed starter turned into such a crucial part of the Orioles' bullpen overnight?

Share All sharing options for: How has Zach Britton Transformed Himself as a Pitcher?

Zach Britton has been a revelation so far this season. In 11.1 innings pitched over 6 games this season, he has allowed exactly zero runs. As a top prospect who has struggled in the majors for the last three seasons, Britton was not part of the rotation plan coming into the season. Without the suspension of Troy Patton, Britton might not even have made the 25-man roster out of spring training. How has the failed starter turned into such a crucial part of the Orioles' bullpen overnight?

First of all, we have to acknowledge that 11.1 innings is not the biggest of sample size. Every pitcher in major league is capable of putting up a streak of 11.1 scoreless innings. Secondly, Britton's peripherals do not remotely match his ERA of 0. He has a FIP of 2.87 and a xFIP of 3.11, which are solid but not great. He has improved his strikeout rate from 9.9% last season to a still below-average 17.5% (21.1% league average). His walk rate remains high at 10.0%, from 9.3% in 2013 (8.4% league average). He has posted a ridiculous groundball rate of 86.2% that is bound to regress toward his career 56.5% groundball rate. Only 6.9% of the batted balls have gone for line drives, resulting in a BABIP of .138. Neither of the two fly balls allowed has cleared the fence. All of the baserunners he has allowed have been stranded. Despite these caveats that suggest regression on the way, Britton may have indeed changed to become a better pitcher in 2014.

The most obvious improvement Britton has made this season is his pitch velocity. 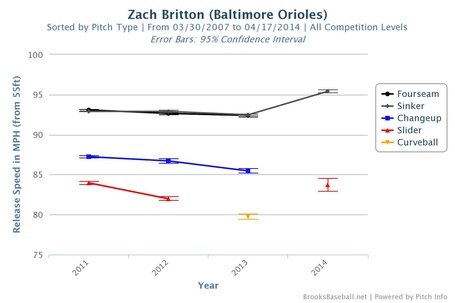 His sinker has reached an average of 95 mph after settling around 93 mph for the last three seasons. His slider has also gained a tick as compared to 2012 when he last used the slider. This is also the early part of the season where velocity tends to be at its lowest, so the improvement is likely to be real. However, most of the improvement can be attributed the change in his role. Instead of pacing himself for 5 innings, Britton can now exert his energy for one or two innings out of the bullpen. This is exactly what Tommy Hunter went through when he moved to the bullpen, so we should not be entirely surprised by Britton's increased velocity this season.

Another aspect of Britton's transformation has been his pitch selection. Britton has drastically simplified his repertoire this season. 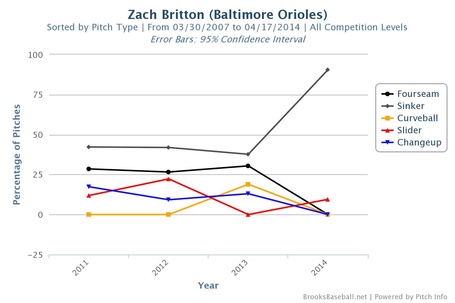 This might also be a result of Britton moving from the rotation to the bullpen, where a pitcher only has to face the lineup at most once. Whatever the reason, Britton has eliminated fourseam fastball, changeup and curveball from his pitch selection. Instead, more than 80% of his pitches have been sinkers this season. In place of his curveball that he only started using last season, he has reverted back to his slider.

Although most of Britton's improvement can be traced back to his move to the bullpen, the decision to replace all fourseam fastballs with sinkers might be the key to Britton's improved performance so far this season. Not including this season, opponents have a combined AVG of .384 and SLG of .616 in at-bat ending with a fourseam fastball against Britton. On the other hand, in at-bats ending with a sinker, opponents have only managed an AVG of .274 and SLG of .384. Another possible cause for Britton's improvement might simply be throwing more strikes. Though it's impossible to detect this from Britton's still high walk rate, Britton has had a career high in Zone%, the percentage of pitches thrown in the strike zone, according to both BIS and PITCH f/x data available on Fangraphs.

We may not be able to point to the exact reason behind Britton's renaissance so far this season, but a combination of the aforementioned factors definitely played a part. We were worried in spring training that the lack of options might lead to Britton's DFA once Patton returned from suspension. We are glad that the pitcher losing his job would no longer be once-top-prospect Zach Britton.