The Orioles are 1-0. How excited should fans be?

How much does starting 1-0 matter to the O's? Like many questions, the answer is "it depends".

Share All sharing options for: The Orioles are 1-0. How excited should fans be?

As fans, we often use the first game of the season as a proxy for the rest of the year. After five months of no baseball, the daily wait for news on the rumor mill, the offseason moves, the signings and trades, the releases, the picks and pans, and the tease that is Spring Training, the team's first game feels like a herald of things to come. If our team wins, we feel elated and like the sky's the limit. If the team loses, we become depressed and curse ourselves for getting our hopes up.

To answer these questions, I used Bayesian analysis along with research into the Orioles' past seasons to estimate the probability of hitting the interesting points on the marginal win curve, given that the team had started 1-0. I looked at how the O's started each of their seasons, noted whether they'd hit certain win thresholds (converting shorter seasons into 162-game ones), and went from there.

I chose the 84-96 wins range because we as fans care more about the 84th, 85th, 86th, etc. win than we do about the 70th, 71st, and 72nd. That's because we know that wins in the mid-to-high 80s put the O's in spitting distance of a playoff spot. And after about 96 wins, you've usually locked up the division. As a fanbase, that's great, but the games mean less and less at that point. It's the wins in between 84 and 96 that hold the most meaning.

Put another way, I answered this question: If all we know is that the Orioles have started off 1-0, what is the probability they will win at least 84 games? 85? 86? And so on, up to winning at least 96 games. In probability notation, I estimated P(B | A), where B = "the chance that the Orioles will hit a win threshold" and A = "a 1-0 start".

With these variables in place, the algebra is straightforward: (xy)/(xy + z(1-x)). In this example, plugging in the values results in .605. So Bayes's Theorem estimates nearly a 61% probability of the Orioles winning at least 84 games, given that the team started the season 1-0.

I analyzed every win threshold between 84 and 96 wins. The data:

Remember that the win mark is a threshold. I'm estimating the probability the team will win at least that many games. Seasons of 86 wins count as reaching the threshold of 84 and 85 wins as well. So think of the results as an over/under, Vegas style. This year, you have a 50/50 chance of winning a bet on the O's to win over 87.5 games. How much would you bet on that?

Here are the results in graph form: 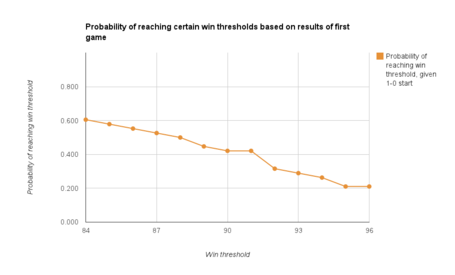 You can see how fighting for those extra wins becomes progressively harder, at least when you're the Orioles, and especially if you're talking about more than 92 wins. That's a pretty high plateau to reach. In part, that's because history is wishy-washy on the team. The successful run from 1961 to 1983 was balanced out by the miserable years from 1998 to 2011. Baseball is hard.

So, what does starting 1-0 indicate about an O's season? It indicates that winning at least 84 games is worth hoping for and that 87 games is not out of the question, depending on how much of your sanity you're investing. But what if the team starts out 0-1? That can't make that much of a difference, can it? Everyone knows the first game of the season is meaningless. It's just one game!

To find out, I ran the same analysis for the same win thresholds except this time, I analyzed what happened when the Orioles started out 0-1: 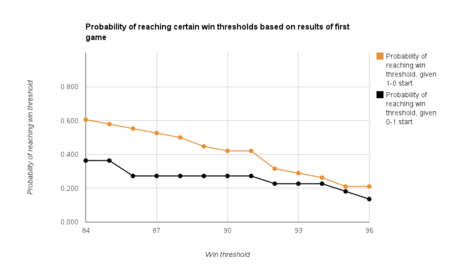 So we have a slightly nuanced answer to the "does a 1-0 start mean something different from an 0-1 start?" If you're talking about the team winning at least 91 games, then yes, the first game of the season should factor into how you feel about the team's chances. You'd be happy with the team starting 1-0 and not so happy if they started 0-1.

But if you're talking about whether the Orioles have the talent to win 92-93 games, then the first game doesn't matter so much. Win or lose, the O's have about the same chance of hitting that mark. For what it's worth, the average AL Wild Card team wins 94 games.

Despite the idea that the first game doesn't matter so much, I'm glad the Orioles are on the happy orange line.