The maturation of Chris Tillman

Share All sharing options for: The maturation of Chris Tillman

Since first cracking the majors in 2009 as a 20-year old, Chris Tillman is in the midst of a solid maturation process that has taken him from a AAA shuttle guy/5th starter to the role of ace in the Orioles rotation. The changes he’s made haven’t been anything significant, but Tillman seems to be doing the little things right more often en route toward achieving the potential that once made him one of the league’s better prospects. In this article, we’ll cover a few items that might be contributing to Tillman’s current success.

Chris Tillman was drafted by the Seattle Mariners in the 2nd round of the 2006 draft. He spent two seasons in the Mariners organization, finishing out the 2007 season at high-A ball. He threw a total of 166 innings between rookie and A-ball. In early 2008, Tillman was dealt to the Orioles along with Adam Jones, Kam Mickolio, George Sherrill, and Tony Butler for then-ace lefty Erik Bedard. He spent the 2008 season at AA Bowie and 2009 at AAA Norfolk before 3+ seasons on the Norfolk/Baltimore yo-yo, quite possibly because he was struggling to find regular success at the MLB level. He was recalled again in the second half of the 2012 season, but this time everything seemed to click. What changes did Tillman make that have him so much more successful than his early years?

Even in his early minor league days, Tillman has always racked up the pitch counts during his outings. While he posted outstanding strikeout numbers, with those came walks. In two years of work with the Mariners organization, he never recorded a walk rate below 3.5 per nine innings. Likewise, during his first season in the Oriole organization, he posted a BB/9 of 4.31 (K/9 of 10.21). A move to the majors certainly cut back his strikeout numbers, but did little to cure his walk issues. In 2012, however, Tillman appeared to curb that problem. He put up a BB/9 under 3 for the first time in his career and struck batters out at an MLB career-best of just under 7 per nine innings. He repeated in 2013 and currently sits at 2.39 BB/9 for the 2014 season. Tillman has also seen an increase in strikeouts since his 2009 debut. He posted a 5.20 K/9 in 2009 and we saw that increase to 7.8 by 2013, rising incrementally each season (he’s currently at 6.84, but that’s of course through just 26 innings). So not only is Tillman throwing more strikes than he was earlier in his career, he’s throwing more strikes that batters aren’t hitting (whether swinging/missing or just plain looking at – more on that in a bit).

One thing that has remained constant over his career is the propensity to allow home runs. He exhibited that tendency at times in the minors and has always struggled with it at the major league level. Even last season, perhaps the best of his career, Tillman allowed 33 home runs, which had him third most among qualified starting pitchers. The homers – and walks – have really hurt Tillman’s FIP and as a result, he’s "outpitched" his FIP in four of his five major league seasons (and continues to do so this season). The projection systems always seem to underrate Tillman because he’s a fly ball pitcher who seems to do well in "luck" based categories, such as BABIP, while not faring particularly well among the stats a pitcher can actually control (homers, walks, strikeouts). Ironically, it’s the exact same logic employed on Jake Arrieta during his Baltimore tenure. Many of those critiquing Arrieta’s performances went "easy" (relatively speaking) because he regularly posted an ERA higher than his FIP (especially during the 2012 season), suggesting either the defense behind him struggled to make the necessary plays or he was simply a victim of bad luck. Arrieta, however, never threw enough strikes, nor did he have solid command over his secondary pitches.

If PITCHf/x is to be trusted, Tillman has modified his pitch arsenal a few times during his career. He came up in 2009 offering a fastball, curveball, and changeup. In 2011, he added both a slider and a cutter (and he’s confirmed he throws both), but used them sparingly (fewer than 100 pitches each). Tillman increased his use of both pitches in 2012 and the slider became a fairly effective offering. PITCHf/x also notes the addition of a knuckle curve in 2013, but it is likely that’s simply a re-classification of his original curveball. It would also appear that he throws a two-seam fastball a handful of times per year. It’s possible this is something he’s been working on and very slowly transitioning it into game situations since he threw it once in 2012, six times in 2013, but has already tossed it four times in 2014.

Tillman’s velocity has been pretty consistent over his major league career. He sits right around 91-92 MPH with his fastball and cutter, mid-70s on his curveball, and low-80s on his change. Tillman’s mid-80s slider bridges the fastball/off-speed gap. 2011 is the only outlier among that data. During that season, Tillman seemed to lose some velocity on most of pitches, most notably a drop to 89 MPH on his fastball. Not unexpectedly, his numbers when using the more velocity-based pitches suffered during that season.

As far as movement is concerned, Tillman throws a fairly typical "rising" fastball, meaning that the spin he puts on the ball makes it appear to "rise" from the batter’s perspective. When he first hit the majors, Tillman’s four-seam fastball often rode in on right-handed hitters, which isn’t ideal with the target usually away from the hitter. It was not an effective pitch for him, especially against RH, and produced just a 5.0 K%. Since then, he’s limited the horizontal movement (from -4.8 to -2.7), and has tripled the K%, among other stats. In fact, his four-seamer of 2013 had the least horizontal movement of his career, yet it produced an 8% swinging strike rate, nearly two percent above his career average. The vertical movement on most of Tillman’s offerings has remained constant, although he’s showing the most movement of that type in career early this season. Time will tell what effect that will have on his statistics.

That change in horizontal movement might be attributed to a change in release point. Since 2009, Tillman has been slowly shifting his delivery to a more overhand type, as opposed to three-quarters. This can also add some deception, which might explain the increase in swinging strike rate, even if Tillman remains below average in that category. 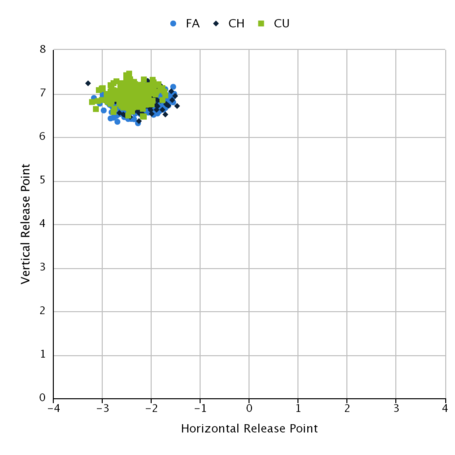 The above graph represents Tillman’s release point on pitches during the 2009 season (courtesy of Fangraphs). The further left of zero, the more towards third base the release. Each shift toward zero (x-axis) represents a more overhand delivery. Take a look below at the same graph, yet with pitches from the 2014 season. 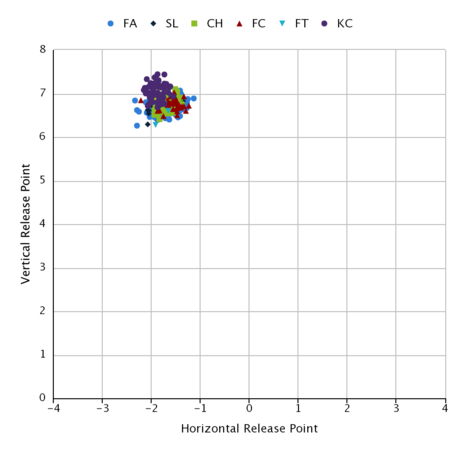 Notice the difference? Tillman has been releasing his pitches with a much more overhand delivery this season than in the 2009 season. The results were similar in the second half of the 2013, as well (left to right shift between the first and second half of the season).

Tillman’s pitch usage has obviously adapted since 2009, as he’s added to his arsenal. He still relies mainly on various types of the fastball, but he’s rounded out his repertoire with additional secondary pitches. Let’s first look at Tillman’s four-seam fastball. Over his first three years (2009-2011), the pitch was not a quality offering. While he did throw it for strikes over 50 percent of the time (over the three year period), batters rarely chased (26% O-swing%) and made contact in over 90% of swings. He recorded an average wRC+ against of 175 (a league-average pitch would have a value of 100). From 2012-2014, each of those numbers have improved. He still throws about the same number of strikes, but more batters are chasing the pitch outside of the strike zone and contact rates are down. In fact, the contact rate against Tillman’s four-seam was just 83.8% last season. The average wRC+ against has dropped from 175 to 101 (note: this does include the 2014 number through only four starts).

The fact that more batters are chasing the fastball likely suggests Tillman has A) developed secondary offerings he can throw for strikes and B) improved his ability to keep hitters off-balanced (which could be a result of A as well). He began using the cutter/slider with regularity in 2012, but the most significant development looks to be improvement of his changeup. It has always been a plus offering for Tillman, but it really took hold in 2012. He actually tossed the changeup for fewer strikes during that season, yet he got more swings and less contact without any notable change in movement and/or velocity. The pitch wasn’t as good early in 2013, but Tillman came on strong in the second half, somehow inducing more swings and improving his strikeout rate. Additionally, Tillman has limited his use of the cutter. He threw it about 13% of the time in 2012 and about 12% of the time in 2013, although much less in the second half than in the first. He’s throwing it less than 10% of the time this season. One can’t argue that this is a bad thing, as his career OPS against when throwing the cutter is 1.059 (career wRC+ against of 196). Fangraphs noted in the offseason that as Tillman has cut back on the cutter (no pun intended), the effect of the pitch has increased. When he tosses it regularly, opposing hitters torch it, but when he throws it less frequently, he gets more swings and, in turn, more swings and misses.

Overall, Tillman has made a number of small changes to help him mature into the role of staff ace for the Baltimore Orioles. The key, however, has been increasing trust in his stuff and throwing more strikes. He reaped the rewards the last season and is off to a great start again in 2014. Further development is anyone’s guess, but you’d have to imagine the Orioles like what they’ve seen.