Wei-Yen Chen has lowered his home run rate in 2014. How has he done it?

So far, Chen has demonstrated a much lower HR rate than usual. How did that happen?

Share All sharing options for: Wei-Yen Chen has lowered his home run rate in 2014. How has he done it?

In 2012 and 2013, LHP Wei-Yin Chen has been a serviceable-yet-unspectacular starter for the Orioles.  Given the three-year, $11.3 million contract that the team has handed to the lefty, the O's got nice result from the investment. With a K/9 rate around the 7's, BB/9 rate around the 2's, he does a good job on limiting walks and striking hitters out.  If there had been major complaints on his pitching game, it's that he's not a ground ball pitcher - he's not has homer prone as some of his teammates, but his fly ball tendencies are something we've all wished could be improved.

Why has Chen been so fly ball prone?  The simple answer is that he throws a good amount of pitches in the middle height of the strike zone - especially the dead middle.  From 2012 to 2013, he threw 5.92% of all pitches to such location, more than other spots in or out of the strike zone, which is not the most welcoming news.  He has been able to generate a lot of swing-and-misses by throwing pitches above the strike zone as you can see here, but as I've explained already, relying on high part of the zone will usually result in flyball-heavy tendencies.

So far in 2014, the sabremetric peripherals has been kind to Chen - in 5 starts, he's pitched for a 2.67 FIP, considerably lower than 4.42 and 4.04 in past two years and a lot of it thanks to a very low 0.31 HR/9.  What is he doing right?  Well, for one, his ground ball rate has increased to a 40.6% - higher than mid-30% rate that he settled for the previous two years.  Also, he's only allowed 3.4% of fly balls as homers - which is unsustainable and will increase (only three starters had a HR/FB rate below 6.00% last year and they are Matt Harvey, Anibal Sanchez and Clayton Kershaw).  But, at this moment, even with a small sample size of five starts, it warrants a look to see if he changed his approach to allow less homers. It would be nice for the Orioles if he figured out a way. 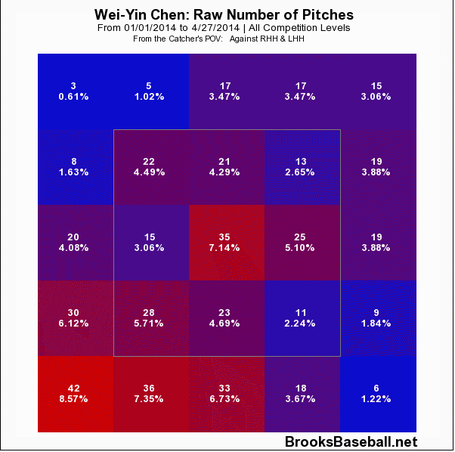 Compared to last two years, you can see that he's throwing less pitches on the middle and high part of the strike zone but he still continues to dart the dead center quite often. But throwing more pitches down or below the zone has helped Chen on inducing more grounders, as you can see below. 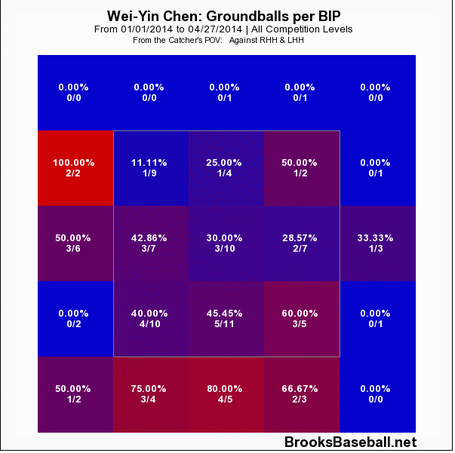 Also, thing to note, he's allowed more line drives than ever with a 29.2% rate, much higher than 24.8% from last year.  That helps explain the ERA in mid-4.00's despite solid FIP and xFIP - he's allowed more hits because more line drives generally result in... more hits.  A lot of that damage was done with, guess what, pitches on the upper side of the zone.  Again, while he hasn't throw as many pitches up as much, but a good amount of the contacts up there have resulted with hard contact.  But then again, it's also where Chen gets some share of whiffs.

It seems like, the answer is simple: Chen threw more balls low in the zone and that correlates to higher ground ball percentage and less homers allowed.  But when he leaves the ball up, he still gets hits hard.  It's not that Chen should aim to throw low all the time because patterns like that will get exploited, but for the sake of allowing less fly balls and homers and keeping more balls on the ground, it might not be a bad idea for Chen to dabble more to keep the ball lower in general, like how he's been doing so far (relative to 2012 and 2013, anyway).