Ubaldo Jimenez looked okay in his first start of the season. He went six innings, which is the norm these days, and struck out six, which is good. He walked three, which is not good, but that's the kind of pitcher he is. He also gave up two two-run dingers, which is not good.

If the Orioles weren't hitting like grade-schoolers at the moment, he would've left with the game tied at 4 or even with the lead. Giving up jacks to hitters like David Ortiz and Mike Napoli, in the bandbox that is apparently OPACY these days, is nothing to be ashamed of. We as fans also need to keep in mind that we didn't sign Justin Verlander here. A four-year $50m deal is what Ricky Nolasco and Matt Garza got. These are pitchers that can best be described as "serviceable" (although Garza is in a higher tier when healthy).

Jimenez is a study of a power pitcher who’s coming to grips with losing his fastball velocity. Against Boston, his fastball sat around 91.2 MPH. This is over a mile and a half slower than his average velocity of 93 MPH last year. 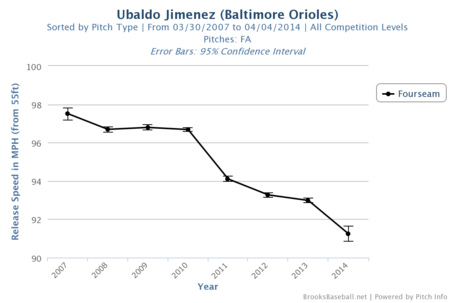 Should we be worried? After all, many pitchers throw harder as the weather warms up and their muscles stretch out. Unfortunately, Jimenez doesn't exhibit this pattern. Throughout his career he mostly starts the season throwing as hard as he's going to: 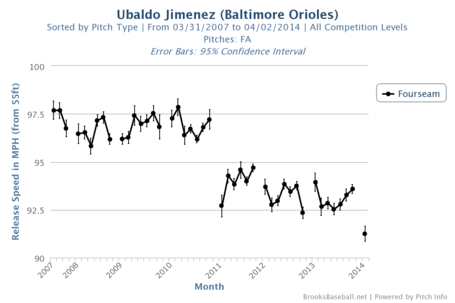 The last time he really gained velocity during the season was in 2011. This makes 2014 unusual, unless we expect his velocity to dip even further, which would not be a positive sign. There could be other factors involved though. He could be tinkering with his mechanics, or he could not want to blow out his arm during his first game with a new team and contract. He also could be following a philosophy of his new pitching coach, Dave Wallace. He also could be realizing that he's over 30 now and wants to save his bullets as much as he can.

He's also not a fastball pitcher anymore. In 2013 he ditched his heater and became a sinker/slider guy: 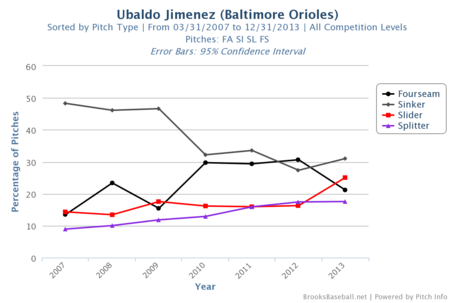 For a sinker/slider guy, fastball velocity should not be a large concern. But what is interesting is that, after laying off his fastball in 2013 and experiencing success, he went right back to it in 2014. He threw fastballs nearly 44% of the time to Boston hitters. He hasn't thrown that many fastballs in a game since August 2012.

Why did Jimenez seemingly ditch the sinker/slider combo he developed? It could be ego; maybe he still thinks he can blow his fastball by hitters. I can imagine that wielding a 97 MPH fastball gives one a masculine rush. It could be that he didn’t feel he had command of his breaking pitches. It could be wanting to keep things simple for his first game for his new team, especially his new batterymate. Maybe Matt Wieters needs more time studying what makes Jimenez effective.

Whatever the case, Ortiz and Napoli provided ample evidence that Jimenez can't fool hitters with his fastball anymore. If he's going to rely on his heater going forward, I'd be very worried. But if he goes back to a sinker/slider combo, I won't care about his drop in velocity so much.

He also got only one grounder all night. I'd say that's surprising, but it's not, given that he threw only seven fastballs to the lower portions of the hitting zone: 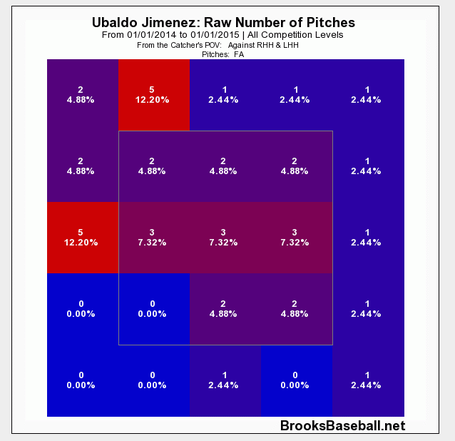 The majority of his fastballs were in the middle of the zone or up. That's, er ... that's not good. Not when your fastball averages 91 MPH, not when you're facing an offense like Boston's, and not when your sinkers and sliders are also up in the zone: 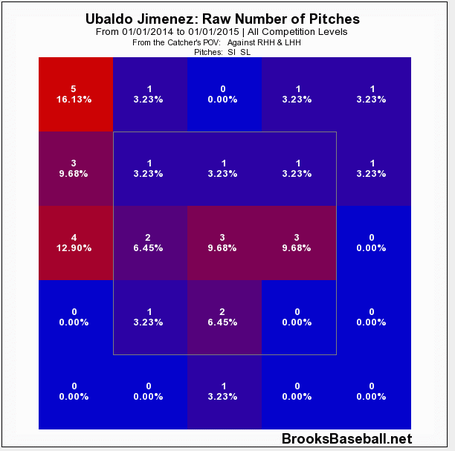 He needs to do better than this. Jimenez came to the team with the highest groundball rate on the O’s rotation, a skill that’s sorely needed in the launching pad that is OPACY. In 2013 his GB rate was nearly 44%, which would have been the best on the O’s staff. Yet against Boston he produced only one worm-burner, a double play by A.J. Pierzynski.

Let's look at the home runs he surrendered. The jack by Ortiz came on a 1-1 fastball that was inside but up: 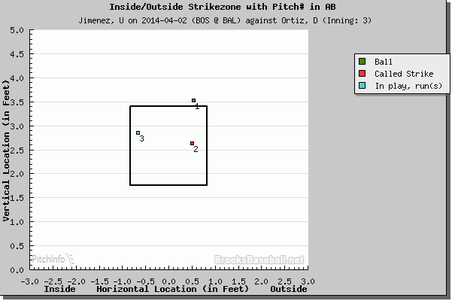 That's not a bad pitch, but it wasn't where Wieters wanted it. He called for a fastball down and in to try and get a double-play grounder. Jimenez simply missed a few inches up, and Ortiz does what he's been doing for years:

Two innings later, Mike Napoli homered on an 0-2 fastball, this time with two outs and Daniel Nava on first: 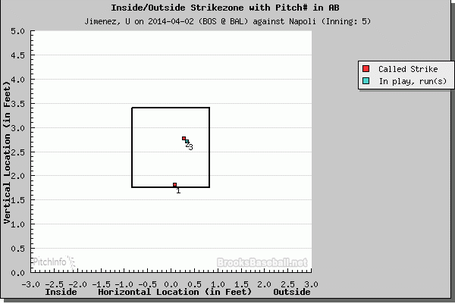 Like the pitch to Ortiz, it looks like Wieters wanted this fastball lower than Jimenez delivers it. It's hard to tell though; Wieters sets up, drops his glove, and raises it again. I wonder if that kind of movement is distracting to the pitcher? Does Wieters do that a lot? It's something I'll be watching in future O's games.

Again, giving up homers to Ortiz and Napoli is not like letting Ben Revere take you yard. But it's instructive to see these homers against the backdrop of mediocre fastballs that were mostly up in the zone. If Jimenez continues to throw like this, he'll wear out his welcome pretty quickly.

I'll end on a positive note. Jimenez notched six Ks, good for a 23% strikeout rate. The Red Sox as a team have struck out 23% so far this year, so there's nothing to be worried about here. He also stranded every baserunner besides Pedroia and Nava. And the groundballs will come, one way or another, eventually.

As you can see with the pitch mix chart above, he already reinvented himself once and experienced success. Maybe Wieters and Wallace just needed another reminder that Jimenez can't rely on his heater anymore. I'll be curious to see how he approaches his next start.