The Orioles are relying on a different kind of bullpen.

Throughout all of baseball, strikeouts are up and pitchers are throwing harder than ever, especially in the bullpen. But the Orioles are missing out on both of these trends. Through Monday their relievers had struck out only 17.8% of opposing batters, third-worst in the sport and well below the average bullpen K rate of 22.1%. Of the relievers who’ve been around all season, only Ryan Webb (21.9%) and Tommy Hunter (21.5%) are close to average. Then it’s a steep drop to Zach Britton’s 18.3%. Brian Matusz brings up the rear with a 13.8% strikeout rate.

The team's bullpen is also well behind the rest of the league when it comes to four-seam fastball velocity. As a group they average 91.3 MPH on their heaters; this is more than a mile per hour slower than the average reliever, who throws 92.6 MPH. 1.3 miles per hour may not sound like a lot, but when it comes to fooling major league hitters, it is.

I was curious about these trends and wanted to find out more about them. How long have the Orioles been behind the league? What skills do they bring to the table instead? What is it costing the team?

Since 2007 the team's bullpen strikeout rate has generally increased along with the rest of the league’s. And yet they haven't manged to be league-average: 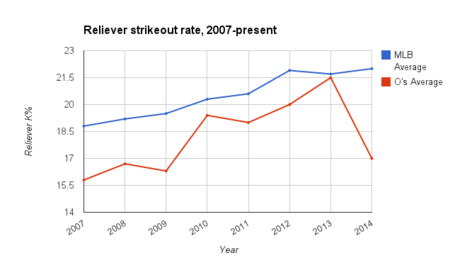 Only in 2013 did the Orioles come close to having a bullpen who can strike out an average amount of batters. And so far, 2014 looks to be the worst year in recent Orioles history.

The rise in four-seam fastball velocity isn’t surprising, as fastball velocity correlates well with strikeout rate. Yet again, the O’s are keeping pace with the league-wide trends but still remain below average: 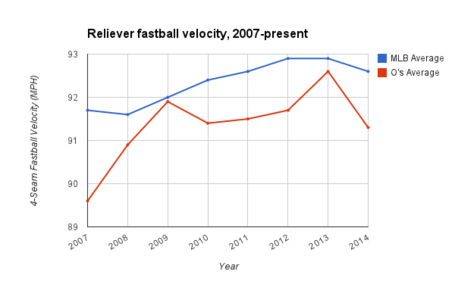 Last year’s bump in average fastball velocity came from moving Tommy Hunter to a relief role as well as getting some innings from Kevin Gausman. These guys both threw 96+ MPH.  The drop this year comes primarily from losing Jim Johnson, who consistently threw over 94 MPH. Just as with strikeout rate, 2014 looks pretty bad for the O’s, although not as bad as 2007 when their relievers averaged 2.1 MPH slower than the league.

If you’ve got a bullpen that neither throws gas nor strikes batters out, how do you get guys out? You start by not walking them: 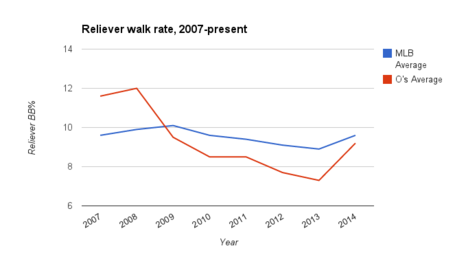 If you're not striking out batters and you're not walking them a lot, they're making contact. In this case your best option is a ground ball, and it seems the Orioles realize this. 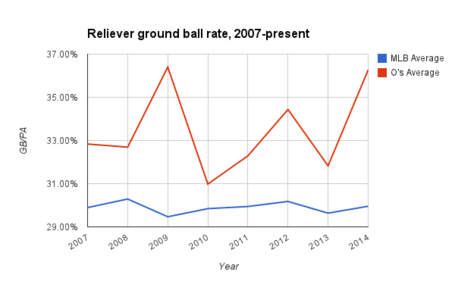 The Orioles pretty clearly have been selecting relievers who can burn worms. They're so far above average in this regard that I wonder if they are purposely trading strikeouts for groundeea. Maybe you can teach a guy a sinker, or how to pitch lower in the zone, easier than you can teach a guy to strike batters out. Groundball specialists  could also be cheaper than strikeout pitchers. It's possible the groundball pitchers, because they aren't throwing as hard as strikeout pitchers, get injured less frequently.

Interlude: My first thought was that the team's bullpen pitches so much that they can't help but have a low strikeout rate. After all if you've got relievers who know they have to pitch multiple innings, they will save some bullets and thus not throw as hard or strike many batters out.

It turns out this isn't the case though. The relationship between bullpen usage (as measured by the percent of team innings that starters pitch) and fastball velocity is pretty weak: 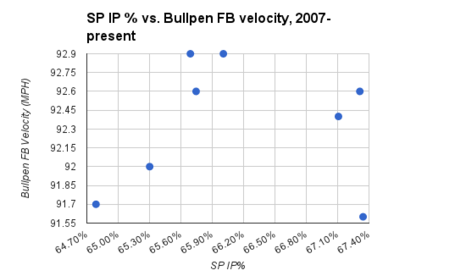 Back to the Orioles. Their relievers also limit line drives and fly balls well: 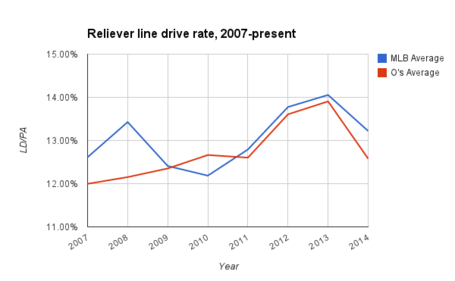 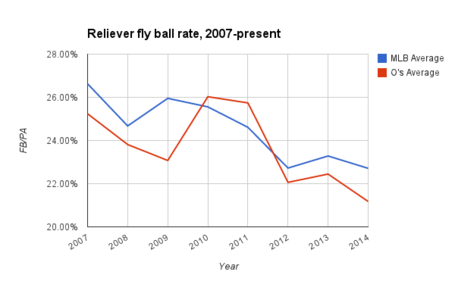 It's good that the team limits fly balls, because they are very bad at letting fly balls leave the yard: 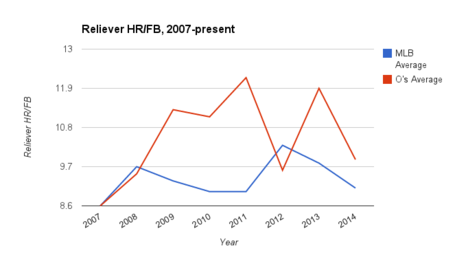 If you were watching Orioles baseball in in 2011, you were probably swearing a lot as you watched ball after ball leave the yard. This graph is also interesting because of the one-year dip in 2012. The bullpen suddenly became very stingy with home runs at the same time other teams' relievers were serving them up left and right. Unfortunately when you look at it on a timeline like this, 2012's HR/FB rate looks more like unsustainable luck than any kind of skill. Thankfully the bullpen is giving up fewer dingers this year, but so is everyone else's bullpen, so the effect is lessened.

How many wins are the Orioles surrendering by focusing on ground balls instead of strikeouts? I used linear weights to quantify the difference between a strikeout and a ground ball. If you're not familiar with linear weights, they are an empirical measurement of how many runs per inning a team scores after they do anything on the field (like strike out, hit into a double play, etc.). These weights form the backbone of metrics like wOBA and wRC+.

Quick note: this next part is for entertainment/discussion value only. I used data from an old season because that's all I could find, and I used it to analyze a different season. If anyone is aware of newer data from a reputable source, let me know in the comments and I'll update this article.

Linear weight data is readily available for singles, doubles, home runs, etc. But the most recent batted ball linear weight data I could find was from 2009 in a comment Tom Tango made on his blog. A comment from Tango still holds a lot of weight with me, so I went ahead.

Quoting from David Appelman, Tango wrote that strikeouts are worth about -0.29 runs (the run value varies slightly based on whether it was a K looking or swinging, so I averaged the two values). Ground balls are worth -0.12 runs. I flipped these numbers to positive values for the pitching team to reflect the fact that a run taken away from the batting team is equal to one added to the pitching team. These weights enable the following calculations:

The big question is: how many extra games would the Orioles have won if those ground balls were strikeouts instead?

The result is 119.51 runs. Using the equivalency of 10 runs = 1 win, those 11.91 runs represent about 12 wins. That’s the additional number of games we’d expect the Orioles to win if their bullpen had magically converted all their ground balls into strikeouts. It's the theoretical penalty the front office is imposing on the team by hiring ground ball relievers instead of strikeout relievers.

12 wins would have taken the team from 85-77 to 97-65 where they would likely have won the division (since some of those games would have come at the expense of the Red Sox and Rays). But don't run up to OPACY with pitchforks and torches. Striking out 1,160 batters is ridiculous; that would’ve been a 54.2% strikeout rate for the bullpen.

What if the Orioles had simply been league-average? The average bullpen struck out 22.3% of batters in 2013; on the Orioles this would’ve amounted to an extra 17 strikeouts. That doesn’t sound like a lot, and indeed the improvement is only about a third of a win, hardly anything over the course of a season. Even if the team had matched the best-in-baseball 26.5% K rate posted by the Royals pen, the Orioles would’ve only gained 1-2 wins in the standings. Again, this discussion assumes that the increase in strikeouts came solely from ground balls. It also doesn't take the game situation into account.

The 2014 bullpen is doing much worse; they only have 89 K's against 500 batters faced. If they were league-average they'd have 111 strikeouts. That's 22 fewer strikeouts or 6.38 additional runs the bullpen is responsible for. Over a whole season that's nearly four wins. The Orioles are at the point where four wins would mean a lot to the team.