As part of Kansas City's Salute to the Negro Leagues, the Orioles honor the Baltimore Black Sox with throwback uniforms.

Share All sharing options for: Orioles to wear Negro League throwback uniforms on May 18th against the Royals

Partnering with the Negro Leagues Baseball Museum, the Baltimore Orioles and the Kansas City Royals will pay tribute to their Negro League predecessors with throwback uniforms this Sunday, May 18th.

Despite the fact that the Orioles organization has no roots in the Negro Leagues, the team will don the uniforms of the Baltimore Black Sox, while the Royals will wear the look of the longest-running Negro League franchise, the Kansas City Monarchs.

The Orioles honored the Black Sox seven years ago, marking the 75th anniversary of the 1932 team which was in first place in the East West League when the league disbanded for financial reasons. In that 2007 matchup with Boston, the Orioles dropped the series opener at Camden Yards while wearing the home white uniforms of the Black Sox.

This weekend, their uniforms will be road gray and include the bolded words "Black Sox" across the chest. The cap will look somewhat similar to the Orioles' current road cap, black with an orange bill, but will feature a circular "B" logo instead.

According to the Royals' Facebook page, their reproductions will be a plain, but pinstriped cream-colored uniform. A navy blue interlocking "KC" will adorn the sleeves, while the cream-colored cap will have a navy blue bill, prominently displaying an "M". 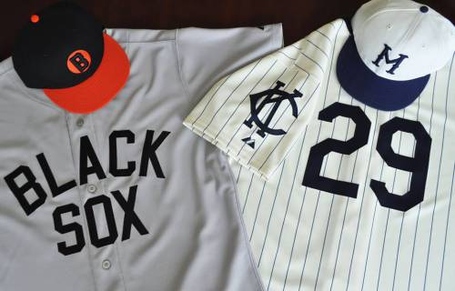 The game-worn and possibly autographed uniforms will be auctioned online after the game to benefit the Negro League Baseball Museum. Meanwhile, the first 10,000 fans through the gates will receive fedoras featuring the Monarchs' interlocking "KC" logo.