Share All sharing options for: Orioles to wear Negro League throwback uniforms on May 30th against the Astros

As participants in Major League Baseball's 8th annual Civil Rights Game, the Baltimore Orioles and Houston Astros will honor the Negro League with throwback uniforms on May 30th. The Orioles will don the look of the Baltimore Elite Giants, while the Astros will wear those of the Newark Eagles.

Neither the Orioles or Astros have roots in the Negro Leagues, but the teams will honor a franchise that shared their city in the 1940s and 1950s.

The Newark Eagles were formed during a merger in 1936 between two independent league teams, the Newark Dodgers and the Brooklyn Eagles. Combining players from both franchises, the Eagles won the 1946 Negro League World Series, defeating the heavily-favored Kansas City Monarchs in seven games. The franchise moved to Houston in 1949, playing two seasons in the Magnolia City before moving to New Orleans. Shortly thereafter, the Eagles dissolved due to low attendance figures. A number of future Hall of Famers played for the Eagles, including Larry Doby, Leon Day, Monte Irvin, Biz Mackey, and Willie Wells.

ESPN Sports Business Reporter Darren Rovell tweeted a picture of the uniforms that the teams will wear later this month. As the road team, the Orioles will wear a red and blue reproduction of the Elite Giants' uniforms, which is very similar to the Atlanta Braves' current road look. The Astros' throwback uniforms will feature a simple blue and white scheme. Both teams will wear a Civil Rights Game patch on the right sleeve and left side of the caps. 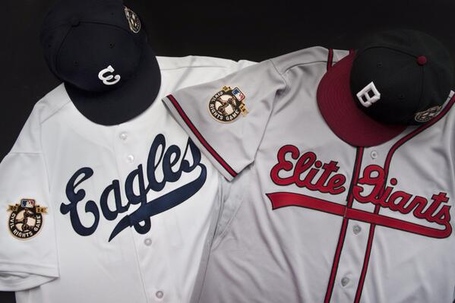 In addition, an Orioles' spokesman confirmed my earlier report that the Orioles will wear throwback uniforms on August 24th against the Cubs.