Ubaldo Jimenez was terrible and so was the Orioles offense in a 11-1 loss to the Athletics on Sunday that can only be described by an MS Paint Recap. 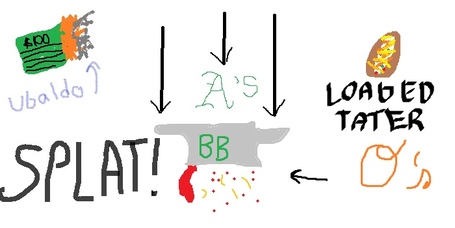 As if this game wasn't horrible enough already just based on what Athletics batters did to Orioles pitchers early in the game (or what Orioles pitchers did to themselves by not throwing any freaking strikes), the bottom of the eighth inning gave us something that will have a lasting and negative impact on both the near-term and perhaps long-term future of this team.

With one out in the eighth, Manny Machado came up to the plate. The Orioles were losing 10-0 at this point in the game. If you think that means prime time to "settle" the score of Machado's shenanigans subsequent to being tagged by Josh Donaldson on Friday night, well, A's reliever Fernando Abad sure seemed to agree with you. Abad threw an inside pitch around knee level to brush Machado back. Machado took exception to this, but he sure ought to have known that was coming in a blowout.

The next pitch was also a bit inside. Machado swung at the pitch and he lost grip of his bat, which flew down the third base line as far as the umpire. The bat throw when a hitter is fooled happens occasionally, but Machado swung way, way late at this pitch, so late that you can't even believe he was swinging at the pitch. Even the MASN broadcast, which is as friendly of a judgment as an Orioles player is going to get, had Gary Thorne and Mike Bordick openly speculating that Machado was trying to throw the bat towards the pitcher.

Machado stood there, stared, perhaps gestured and shouted. The benches emptied, the bullpen ran in. There were no punches thrown, although Orioles first base coach Wayne Kirby did rush in to restrain a member of the Athletics. Abad was ejected, Machado was ejected. I am embarrassed to have watched an Orioles player behave in this fashion. I can't remember a more blatant and stupid display of faux-machismo ever by an Orioles player.

For these antics, Machado will probably find himself fined, suspended, or both. He deserves to be. Someone in the clubhouse needs to get him under control before he continues this kind of behavior or does something even worse.

After dropping this series to the Athletics, the Orioles will next face the Red Sox for three games in Baltimore. Monday  night is the opener of the series, where Bud Norris will be facing off against Jake Peavy in a 7:05 game.