The only thing worse than repeat bobblehead stars is not having any players worth repeating.

Share All sharing options for: Adam Jones gets another Orioles bobblehead giveaway and that's just fine

When the Orioles square off against the Twins on Labor Day, the first 25,000 fans will receive an Adam Jones bobblehead.  There's nothing unusual about this in and of itself; Jones is the Orioles' most recognizable star, and teams like to promote that sort of thing.  But there is something unusual about it, actually -- the Orioles are giving away their third Jones bobblehead in five years.  The number of other current Orioles who've had more than one bobblehead crafted after them?  Zero (mostly -- more on that in a minute).

The Orioles gave away a full-size Jones bobblehead (pictured above) in 2009, Jones's second year as an Oriole, when he looked (correctly) to be an emerging star.  They captured Jones in his glory, snagging a ball at the outfield wall while blowing his signature bubble.  At the time, the bobblehead was a nice treat for fans -- another in a long line of players who they could hope wouldn't be embarrassing to have on a shelf in their basement a few years later (or at least, no more embarrassing than having a basement shelf full of figurines of athletes as a grown adult would otherwise be).

In 2010, the Orioles decided they had their outfield all locked up for the foreseeable future, and gave away three interlocking miniature outfield bobbleheads.  They were two-thirds right about the players in question.  The other third of the mini-bobblehead trio that year was actually in the minor leagues when the team gave it away, but let's not talk about that.  This set was the partial exception I mentioned above; Nick Markakis was one of the mini-bobbles, going with a full-sized figurine the team gave away in 2008. 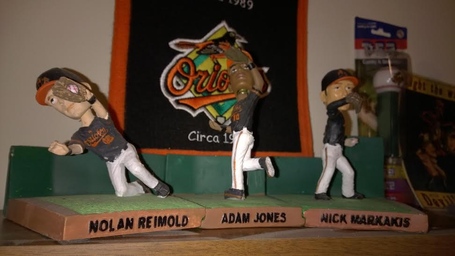 Now, in 2014, the team is preparing to give away another full-size Jones bobblehead -- the first time it's chosen to offer two bobbleheads for the same player since a Cal Ripken series in 2007.

This decision in and of itself, of course, says a lot about the team's -- and the fans' -- perspective on Jones.  The team has committed to the player through 2018, and he's said in public that he has a hard time seeing himself finishing his career anywhere else.  He endeared himself to Baltimore by embracing the Ravens, following them around during the NFL postseason. He can be brash and carry a chip on his shoulder, unleashing moments like the recent index finger to the sky after he hit a big home run against the Yankees.  He unleashes pies on team heroes with regularity.

Our own Mark Brown has noted, correctly in my opinion, that if there's a future Hall of Famer on the Orioles, it's probably Jones.  It's a long way to go before then, of course, but at 29, Jones has already been the leader of the teams that have steered the Orioles from irrelevance to contender status, while putting up solid stats year in and year out, and racking up gold gloves, all-star appearances, silver slugger awards and some stray MVP votes.  He's a surefire entrant into the Orioles Hall of Fame, and he'll be remembered fondly by legions of fans virtually no matter what happens.

So, if you're a giveaway hound, don't be dismayed about the repeat bobblehead appearance.  Be grateful that the team has finally produced a longstanding, productive player who's actually worth repeating in bobblehead form five years later.  It's been a long time since that happened, and I have the Brian Matusz and Sammy Sosa giveaways to prove it.  Enjoy Adam Jones.  Enjoy his bobblehead likenesses.  And don't forget to #StayHungry.