Brad Brach is going unnoticed as a good reliever on a division-winning team.

Whom do you think of when you think "Orioles bullpen"?

These guys are all very good, but I don't want to talk about them today. Today I want to recognize a man whom I didn’t even realize the Orioles acquired until I heard his name mentioned on an early CamdenCast this year. A man who was drafted with the 23rd pick in the 42nd round in 2008. A man who was DFA’d last year by a terrible, unwatchable West Coast team. A man who was swapped for a pitcher that put up a 7.23 ERA at AA.

But Brach has done good work in key spots for the Orioles this year. A useful way to evaluate relievers is the metric Win Probability Added, or WPA. This metric tells you how much a single player contributes to his team’s chances to win games. It adds up over the course of a season. The problem is that certain players naturally come up more often in higher-leverage situations. Brach’s WPA total will never match Zach Britton’s, because Britton always comes in in the 9th when the leverage is likely to be higher than in the 6th or 7th when Brach might enter.

The metric WPA/LI, sometimes called Situational Wins or Context-Neutral Wins, solves this problem by putting all players on equal leverage footing. By this measure, Brach is the third-best man in the Orioles bullpen among the 11 relievers who have pitched at least 10 innings this year:

FanGraphs also calculates a number they call "Clutch" that relates to WPA. This measures how well a player performed in high-leverage situations relative to how well they performed in a context-neutral environment. It’s calculated by subtracting WPA/LI from WPA/pLI, where pLI is a player’s average leverage index for all game events he’s involved in. Brach has a total WPA of 1.36 and a pLI of 0.77. Divide these and subtract his WPA/LI and you get 0.99 (which FG oddly displays as 1.01).

By this measure, Brach should change his name to Cluch McClutcherson; he leads the team’s bullpen and it’s not even close. O'Day is next-best at 0.48. Among all major league relievers with at least 10 IP this year, Brach is 13th-best in the entire game.

Even if you remove much of the context and measure Brach’s contributions in terms of runs prevented given the runners on base when he’s pitched, he ranks well by RE24:

This year Brach’s prevented nearly 12 runs from scoring, given the runners on base when he’s pitched. That’s a little over a win. With an AL East title clinched and a 95+ win season likely, I can’t say these wins were particularly valuable. But for a reliever it’s still a good showing. It ranks about 34th out of 326 relievers with at least 10 IP.

Has Buck Showalter recognized Brach’s contributions? To answer this question, I used gmLI, which is leverage index of the game when the reliever enters. If it’s high, the manager is regularly entrusting key spots to his pitcher. If it’s low, the manager is looking for the guy to eat some innings or just get some work. Remember that an LI of 1 is an average game situation.

Brach’s gmLI is 0.86, third-lowest on the team. That’s not mop-up duty, but it’s below average. (Heck, even Evan Meek has a gmLI of 1.50. Can anyone explain that?) But maybe Buck has recognized and rewarded Brach's early success with higher-leverage opportunities later on?

If so, then we should see Brach’s gmLI increase over time. To check this, I looked at each day Brach pitched and calculated a rolling three-game gmLI average. Has he been rewarded for his performance? See for yourself: 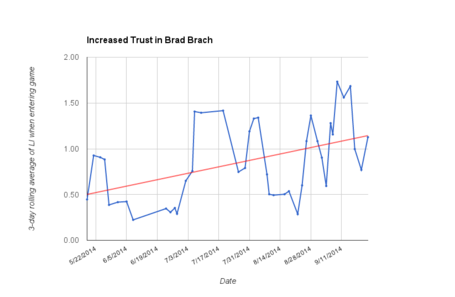 Looking at the trend line in red, the answer is yes: Brach has generally been getting higher-leverage innings as the season has gone on. From this, I take it that Buck trusts Brach now more than he did at the start of the season. And fans can't really argue with the results: prior to 9/24 Brach had a 3.65 FIP and had racked up 0.4 fWAR.

The turning point seems to have been Brach's July 6th outing against the Red Sox. The Orioles were in Boston, tied 6-6 in the bottom of the 9th. Brach replaced Tommy Hunter and worked around a single and a walk to get the Orioles through the 9th. He also worked the 10th and the 11th, keeping everyone off the bases. That gave the Orioles time to come from behind, using a David Lough triple and a Ryan Flaherty single to go up 7-6 and win the game in the 12th. Since then, Brach has seen mostly high-leverage work.

Brach’s WPA in that game is still the most recorded by an Orioles reliever this season. Which is ironic, seeing how he's flown under the radar all season. But maybe the ALDS will change that. Brach has proven to local audiences that he can excel in crucial spots. It's time for him to get some more recognition for it.

All stats from FanGraphs and Baseball-Reference prior to 9/24.