Orioles lose 4-2 to Blue Jays in another meaningless game

The chance to get the top seed is gone, but was it ever really that close? I'm looking forward to wrapping up this last weekend and getting to what really matters.

Share All sharing options for: Orioles lose 4-2 to Blue Jays in another meaningless game

Tonight's game between the Orioles and Blue Jays was probably the least interested I've been in a game all season. The only possible thing that the Orioles still had to play for was the teeniest, tiniest chance that they might get the top seed in the playoffs, something also dependent upon the Angels getting swept this weekend, which just isn't going to happen. Scrub lineup was in full effect, and it showed in the 4-2 loss.

Chris Tillman started the game for the O's, his final tuneup before game one of the ALDS in six days. He wasn't at the top of his game, it's fair to say, but he was also let down quite a bit by his defense, which looked a touch Bad News Bears-y at times. The four runs he gave up marked the first time he'd allowed four earned runs since June 5th, a span of 20 starts. Not bad, Chris, not bad. I'm gonna give you a pass tonight based on that excellent track record. And hey, good job not walking anyone.

While tonight's game was an entirely different sort of meaningless game than the many that I've recapped for this site throughout the years, it still reminded me of when I spent the time to write about loss after loss after loss. I'm so thankful to the Orioles that they finally allowed me to start writing about meaningful baseball. I went back and started reading my old recaps. Those were strange times, friends. Here are just a few for you to read this evening to remind you how good we have it these days.

2009 was a bad, bad, bad year. We had some good times on this site, for sure. But there were dark days as well. The Orioles did not deserve me. Also, I had a lot of hate in my heart.

You know how sometimes a person is in a relationship, and they want break up, but they're too lazy or non-confrontational to just do it, so they passive aggressively start acting like a jerk so that the other person will go ahead and break up with them and they don't have to deal with it? This is what the Baltimore Orioles are doing to me. I've said it before and I'll say it again: the Orioles are my abusive boyfriend. 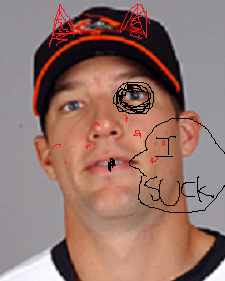 September 1, 2009 - Yankees 9, Orioles 6 (in which I actually apologize for being mean and short with people because the Orioles are making me miserable)

Tonight was yet another frustrating loss. My head says, "Who cares" but I can't help it. Watching the losses, listening to that pro-Yankee crowd, seeing another season end with a whimper, it's tough. It makes my stomach hurt. We keep banking on the future, but what if it never comes? What if there is 12 more years of this? Do I stop liking baseball? Because I can't keep it up, and I can't root for another team.

That was a rough month, for sure. And the start of 2010 was even worse. But then:

The Orioles just lost three out of four to the Kansas City Royals, despite every effort by the Royals to throw these games away. A fitting end to the Trembley/Samuel managerial tenure, if you ask me. Tomorrow is an off day, and Tuesday begins the Buck Showalter Era of Orioles baseball. Time will tell exactly what that means, but I say bring it.

You know what? They brought it. So let's enjoy these last two meaningless games this weekend and then watch our O's kick some butt in the playoffs.