The Orioles are getting respect from the media for the ALDS

There are some people in the media who are actually picking the Orioles as the favorites in their ALDS matchup against the Tigers. For O's fans who are used to being the underdogs forever, how do we handle that?

Share All sharing options for: The Orioles are getting respect from the media for the ALDS

Sometimes it seems like the mainstream national baseball media has never quite known what to make of the Showalter/Duquette era of the Orioles. This kind of confusion carries over into some number-heavy Internet baseball outlets as well. The Orioles have managed to succeed in recent years in ways that don't necessarily fit into pre-existing notions of how a successful team should be built, or what it should look like.

Although this can occasionally drive O's fans (myself included) into annoyed fits, it is not necessarily a bad thing. The Baltimore fan thrives on that disrespect. It's what makes the world go 'round. The haughty, condescending doubt - best illustrated by Keith Law of ESPN's famous 2011 declaration that whoever would take the then-vacant Orioles GM job (now held by Dan Duquette) would have to be someone with no self-respect - fuels the indignant rants about not giving the O's proper credit.

In turn, the Orioles succeeding in spite of proclamations like that makes the success feel that much sweeter. They were wrong and Orioles fans were right. We are happier for having had the chance to unleash those rants. Much better that than arrogantly basking in universal praise. What would that even be like, where everyone just thinks you're the best and never questions it? Orioles fans certainly don't know and probably never will.

When that class of baseball commentator starts to talk up the Orioles, I almost don't know what to do with myself. I ran into this in reading a Monday column by Jayson Stark on ESPN where he polled 15 team executives whose teams are not in the playoffs about who would win the pennant in each league. Seven of the people he talked to put forth the Orioles as their AL winner, with two of them even thinking the Orioles might win the World Series. They gave quotes like this:

"The X factor in all of this," said one scout, "is Buck [Showalter]. There's a certain level of magic going on with this guy that I haven't seen in a while. He's so prepared with matchups and with his thought process, he always seems like he's ahead of the game. It makes me think this might be Baltimore's year."

A baseball scout is basically talking about Orioles Magic. That is awesome. At the same time, it also gives me the creeps. Guys who don't understand the Orioles at all were predicting their doom. Now, still not understanding the Orioles, they predict success? They don't have a track record of being right.

To be sure, this scout may have been appreciating what the Orioles are doing all season long. Maybe he wishes his own team was doing things more like the Orioles. You never really know when the source is just "a scout." There are many and they all have different opinions. But still, it's weird to see it written on ESPN that the Orioles could win the World Series. 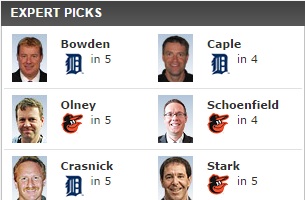 Your eyes do not deceive you. Half of the ESPN experts here think the Orioles will win this series against the team that has the last three AL Cy Young winners and the guy who probably didn't deserve two straight AL MVPs but did deserve two straight runner-ups, so what's the difference really? Miguel Cabrera is good. Max Scherzer is good. David Price is good. Justin Verlander has a strong track record. Victor Martinez led MLB in OPS.

The Orioles cast of characters, after being frequently - though not in all quarters - disparaged throughout the year, with pundits proclaiming things like "they are an okay team with an inflated record", is supposed to beat that team of stars?

Well, sure. Allowing the third-fewest runs in the American League doesn't happen by accident. Maybe they don't have the star power on the pitching side, but Nelson Cruz led the majors in home runs and Adam Jones was one of the best players in the league. The O's are not without a couple of stars of their own, and their rotation, after a full season under the tutelage of pitching coach Dave Wallace, might well be capable of holding off Detroit for long enough to let an elite bullpen take over.

Still, it's enough to make you nervous. If you're expected to win and you lose, that sucks. If you're expected to lose and you win, that's awesome. Losing when favored brings out phrases like choke job, collapse, all kinds of un-fun stuff. Winning when you're the underdog, well, that's what it's all about. At least for me. Now the Orioles might not even be proper underdogs.

Before we panic that we are losing that, you might have noticed, if you went through the link to Stark's article, that its title is: "Why the Nats will win the World Series." Are we going to anoint as World Series favorites the team that cakewalked through the only division in baseball where only the division leader was above .500, really? Name as darlings those turncoat upstarts to the South who have been engaged in a multi-year conspiracy with MLB to screw the Orioles out of millions of dollars?

This team that played a mere 46 games against over-.500 teams and went only .500 in those games - that's who we're going with as the favorites, really? Way to disrespect the Orioles, ESPN. Maybe if you stopped letting your blind love of Bryce Harper lead you astray, you might actually observe a thing or two about baseball.

And just like that, everything is back the way it should be. Now, please bring on the Tigers, whatever time they end up playing the games. Thursday at 5:37 or 6:07 can't get here soon enough.

Here's hoping that scout is right about Orioles Magic. Just don't tell anyone that I sounded confident for a second there, okay? I've got an image to uphold.