Joey Rickard has come back down to Earth. What happened?

Joey Rickard set the league on fire the first week. Fans chanted his name. Then the hits stopped falling during the past two weeks. What happened?

Share All sharing options for: Joey Rickard has come back down to Earth. What happened?

Joey Rickard had a Spring Training that only Jake Fox could relate to. He slashed .397/.472/.571/1.044 and displaced Hyun Soo Kim as the presumed Opening Day starter in left field. The first week was out of a dream. He was serenaded by the Baltimore faithful seemingly every at-bat, was pushed into a curtain call by J.J. Hardy, and JUST. KEPT. HITTING.

Most of us guessed that pitchers caught onto whatever Rickard's doing, and the pitch data from the first week of the season compared to the last two weeks bear that out pretty sharply.

All graphs (except where noted) are from Brooks' Baseball, an absolutely indispensable resource for pitch data.

During that torrid first week, he saw mainly RHP, and did pretty well when they threw fastballs, even on two strikes. He saw almost 70% fastballs, as the graphs below shows. 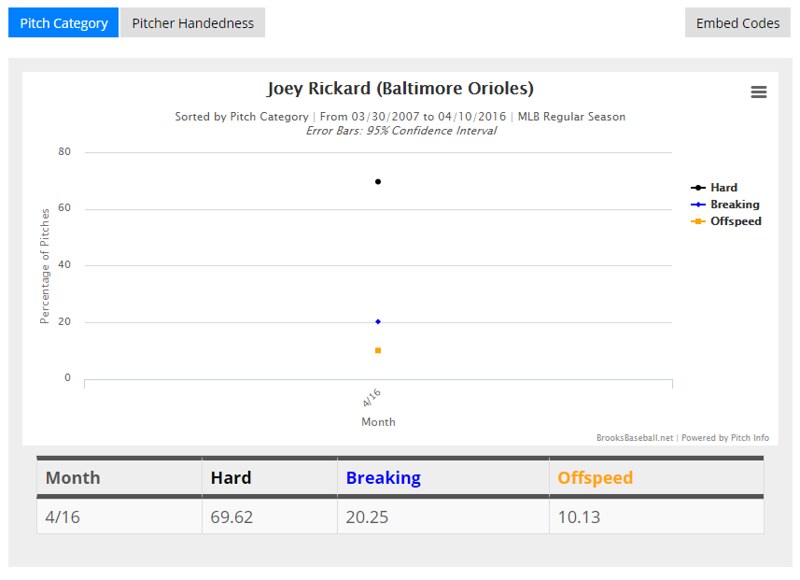 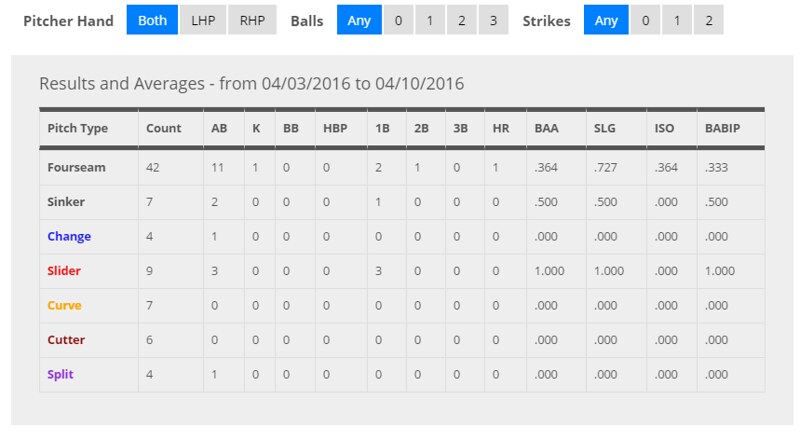 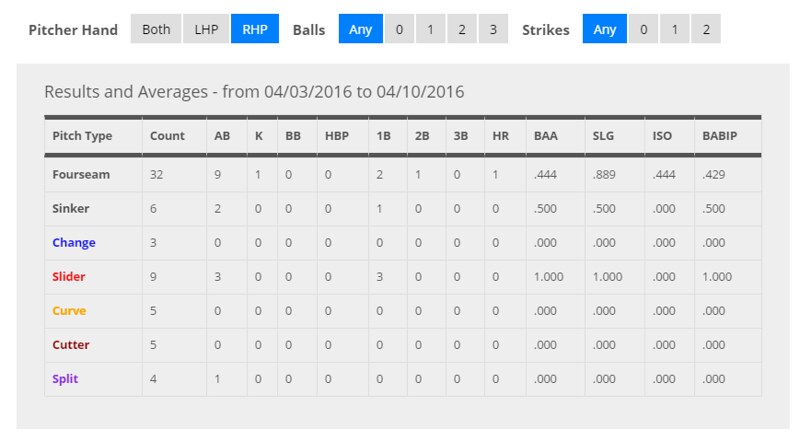 Yes, these are extremely small samples taken over 5 games. But note the absolute lack of success against breaking pitches, aside from a slider. He didn't hit a single one. Not one. Now, this chart doesn't show how many he took for balls well out of the strike zone, but it's still worth noting.

We can't really say anything about his lack of success against LHP that first week, since it's only 3 ABs. He could have hit 3 HR or struck out 3 times, it wouldn't really tell us anything.

So, let's take one last look at what was thrown to Rickard in various counts during that first week. 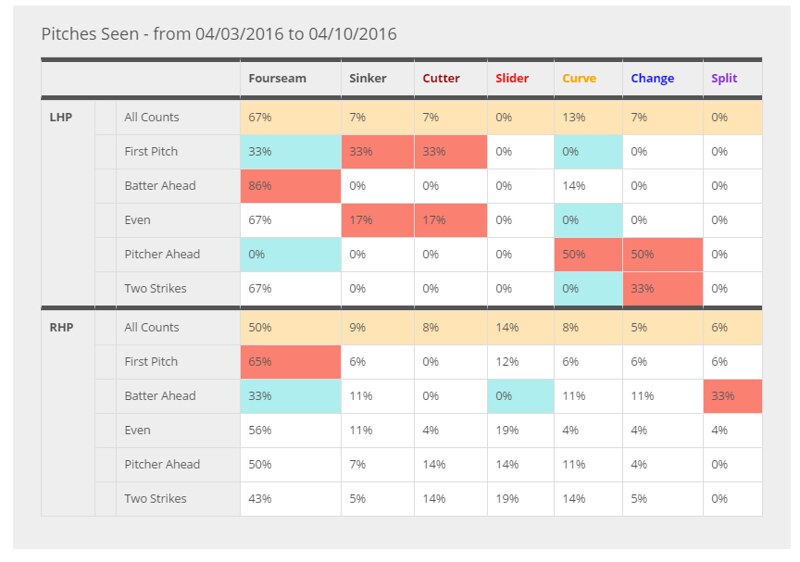 Things were about to change for Joey Rickard. As scouts, managers and Kardashians know, it doesn't take long for video to get around, and the word was soon out - you don't need throw Rickard fastballs to get him out. I'm guessing, but I'd say opposing coaches saw something in those swings against breaking balls. 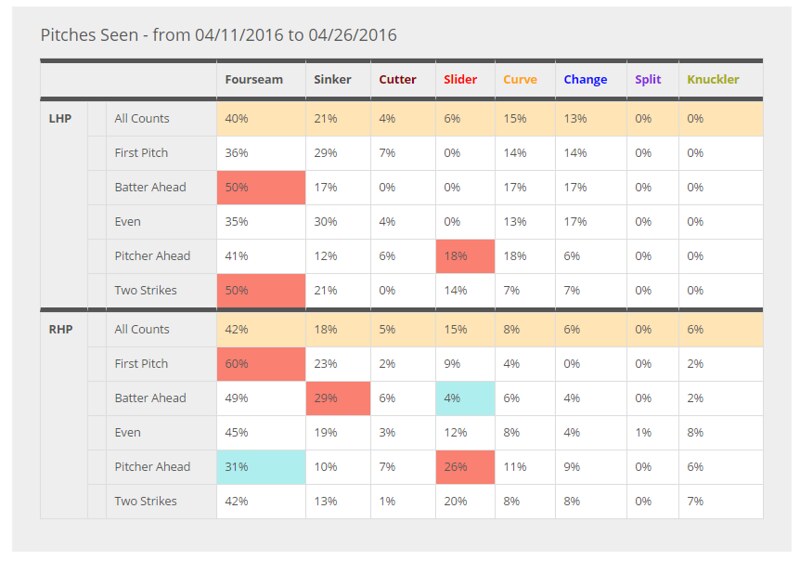 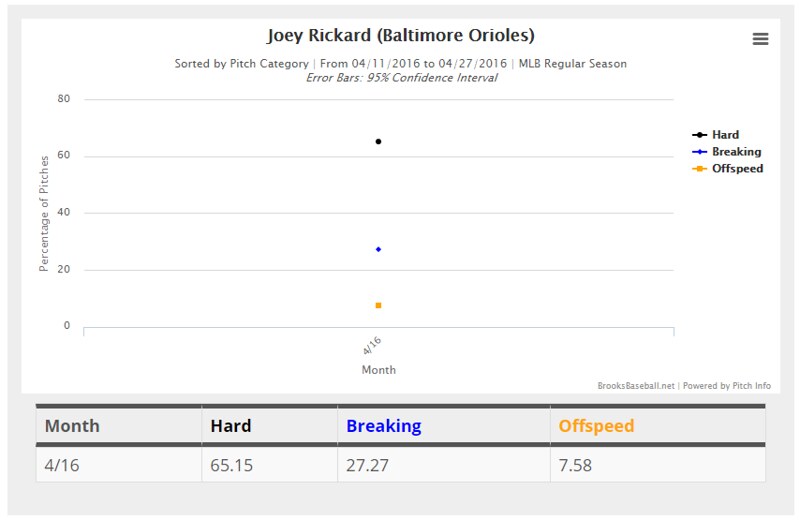 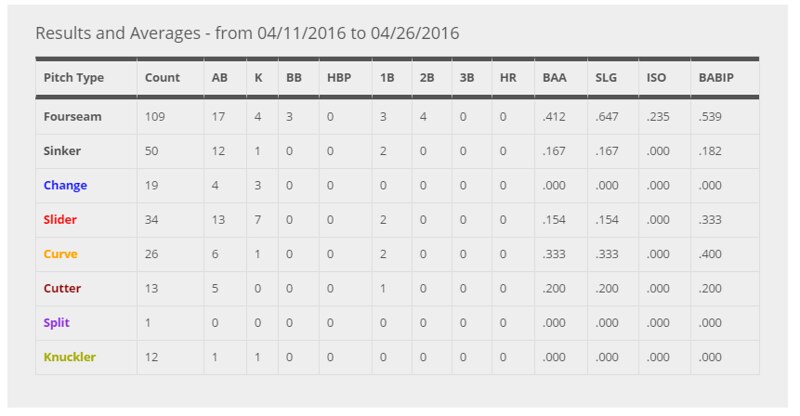 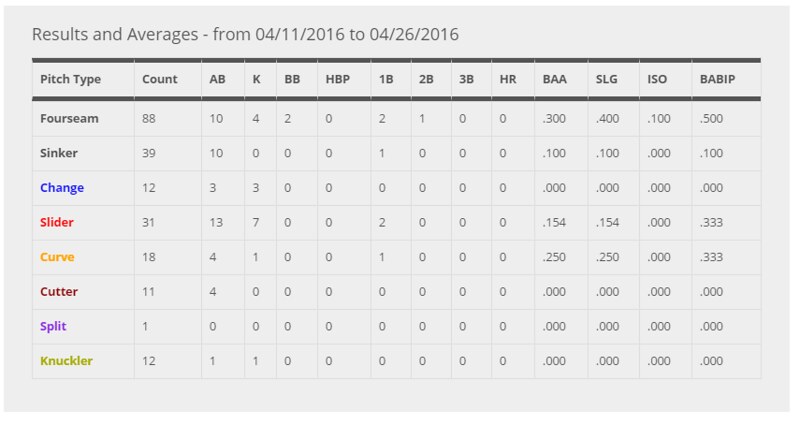 For the last 13 games (starting with April 11), he's seen well under 50% fastball from both sides of the pitching mound, and many fewer cutters, and more sliders when the pitcher is ahead in the count. He's seen fonly 31% fastballs when behind in the count in the last two weeks from right-handed hitters. Note, please, that this data doesn't show us if he's getting pitched inside or outside.

But it is obvious teams have decided they don't need to throw a fastball to get Joey Rickard out. Throw him something that bends, and he'll probably do it for you. Overall, he's seeing 7% more breaking balls, and slightly fewer off-speed. Teams are throwing him pitches that move, especially later in counts, and he's not hitting them well.

One last note - I'm not sure what this says, but it says something. 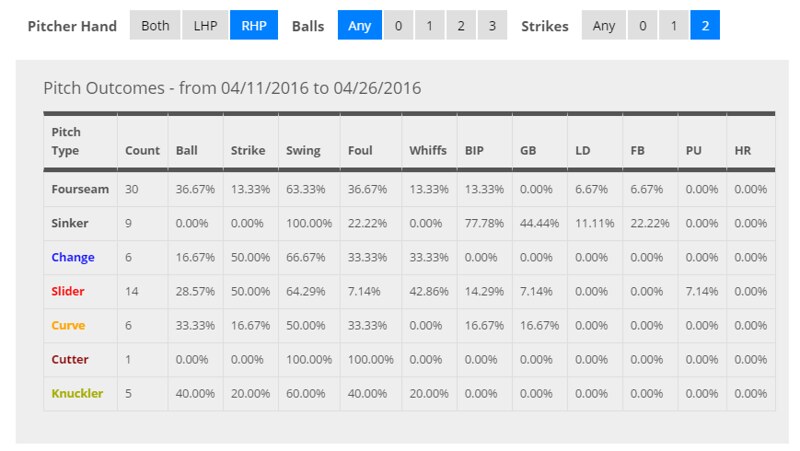 For the past two weeks, even when Rickard is thrown a fastball on 2 strikes by a RHP, he doesn't hit it in play. Oh, he swings at it - 53% of the time. He's fouling 36% of them off, missing on 13% of them, and only putting 13% in play. But look at how relatively few fastballs he saw - just 30 out of 71. Yes, that includes a start by knuckleballer R.A. Dickey, so that skews this really, really small sample.

I can't stress enough we're talking about fewer than 100 at-bats. Nothing's set in stone. But the word is out - if you want to get Joey Rickard out, use a RHP with a slider or curve and throw it late in the count, and Joey will do most of the work for you.