Eddie Murray was the coolest cat to ever put on the orange and black. Take a few minutes to check out his ten greatest baseball cards.

The start of a new season of Orioles baseball inevitably reminds me of the days of my youth, sitting on my living room floor with a factory set of Topps baseball cards spread out in front of me while Vin Scully and Joe Garagiola broadcasted the "Game of the Week" on NBC.  As an Orioles fan living far away from Maryland, you would cross your fingers in hope that the Orioles would be the featured team.  That was rarely the case, so I would rely on my cardboard idols to learn more about the O’s.  Of course, I would spend the most time poring over my Eddie Murray cards.  He was my childhood hero, and the greatest player to ever don a major league uniform.  So with the start of a new season, let’s take a look at the ten greatest Eddie Murray baseball cards ever made! 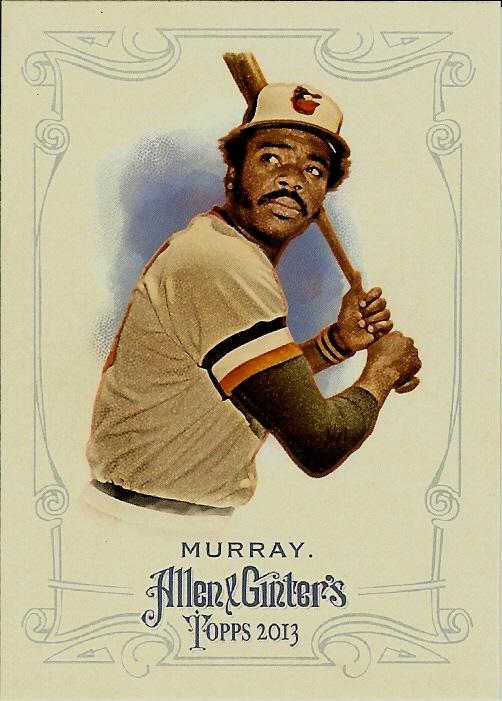 Cynics will tell you most of modern day baseball card collecting is geared towards appealing to the nostalgic memories of middle-aged men.  Who are we kidding, they’re probably right, but they can go on ahead and keep cranking out gems like this.  I don’t totally understand the philosophy behind Allen & Ginter, especially their non-baseball related cards, but this 1970’s era shot of Mr. Murray is tremendous. 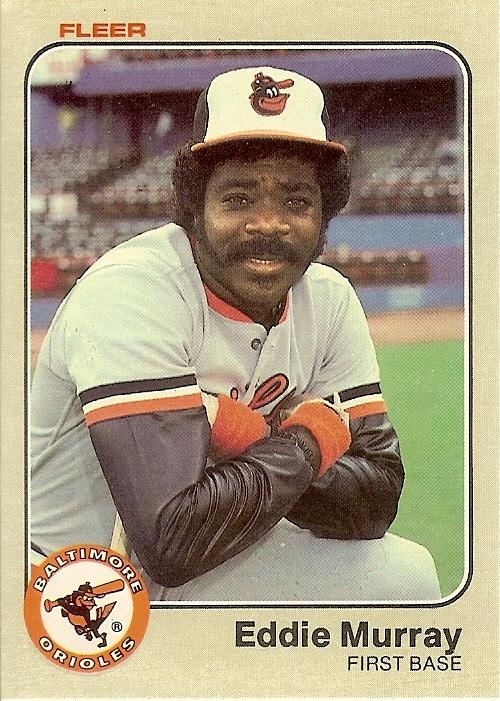 When you look at all of the cardboard Eddie Murray graced throughout his playing career, you realize how photogenic he is.  It’s hard to find a bad picture of him.  However, in most of his poses or action shots, he looks extremely serious…if not downright intimidating!  For that reason, I love this image.  It is a nice, intimate portrait of the friendly Eddie his family and teammates swear by.  And there are two additional bonuses for inclusion on this list.  First, it was from the year the Orioles last won a World Series.  Second, it features the garbage bag warm-up jacket he often wore under his jersey in the 1980’s.  I start to sweat just looking at it. 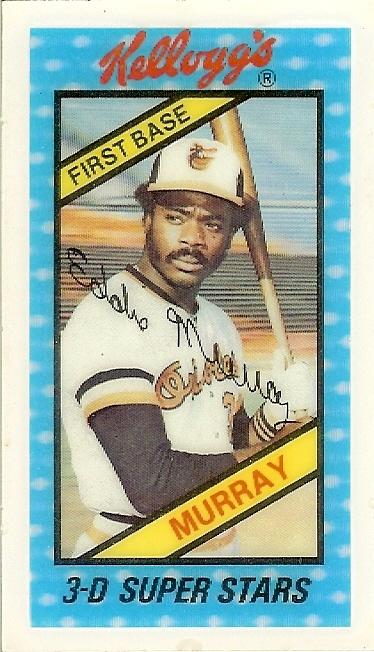 Does anybody else remember pulling these out of their boxes of Raisin Bran?  I know I had a fistful, but I had to log onto EBay to secure this particular card.  For the uninitiated, Kellogg’s used to give away three-dimensional cards in their cereal boxes.  Very few survived in good condition, and I think this was Eddie’s best year as a breakfast hero.  These cards are tremendous and a favorite of hardcore collectors.  Just look at the holographic beauty of Eddie Murray! 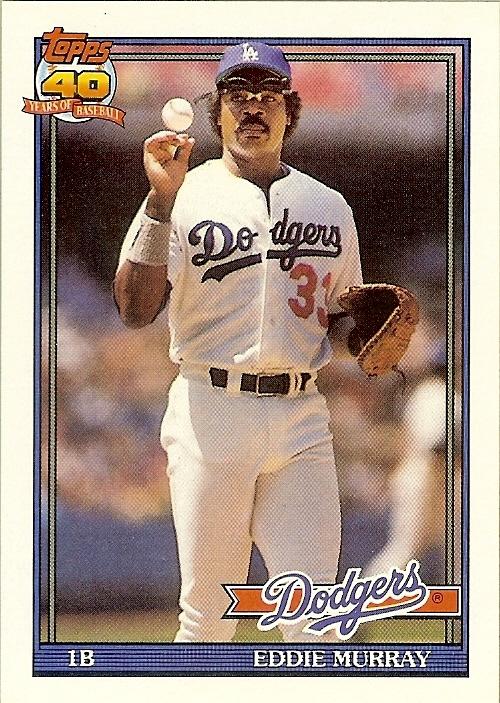 It pains me to include a non-Orioles card on this list, but we must give credit where credit is due.  The 1991 set from Topps was a conscious counterattack against companies like Upper Deck and Score, who were featuring much more dynamic, higher quality photographs on their cards.  Spurred by their 40th anniversary and sudden challenge in the marketplace, Topps came out swinging.  Eddie looks great in the colors of his hometown team, Los Angeles.  He was also coming off what might have been his greatest season, when he led the majors with a .330 batting average and slugged .520.  My favorite part of this card is his flip-up sunglasses.  I don’t recall any other card where he’s wearing those.  This would also be the last year Topps printed on their traditional cardboard stock, moving instead to their now standard glossy, white, thinner material. 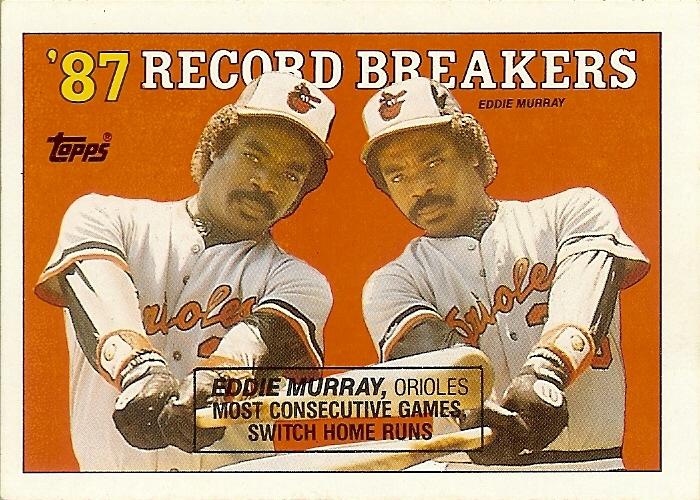 The second most famous error card in Orioles history (*cough* Billy Ripken *cough*), for some inexplicable reason the first batch of Eddie Murray "Record Breaker" cards were printed with a black text box instead of a clean front.  Either way, featuring Murray batting from both sides of the plate on the same card was quite progressive in 1988. 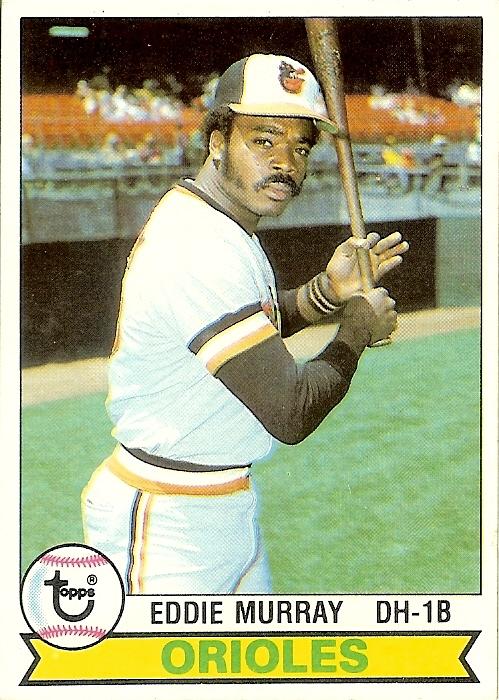 Eddie Murray never suffered a sophomore slump on the playing field, and the same can be said for his baseball card career.  Posing in foul territory, there is a palpable level of confidence and perhaps even swagger exuding from Eddie.  Sans batting gloves, as he was for most of his career, the eye is drawn to his left hand, which is only gripping the bat with two digits.  The reason?  Only Eddie knows…and he’s not telling. 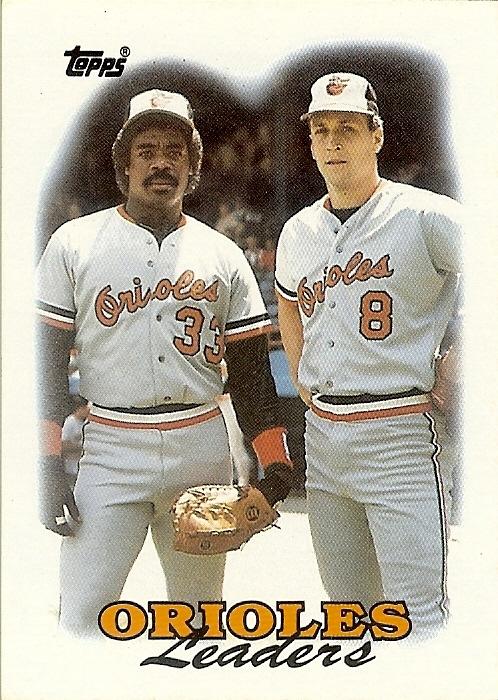 There are surprisingly few baseball cards that feature Hall of Fame teammates Eddie Murray and Cal Ripken, but this team leaders card from the 1988 Topps set is hands-down the best.  The sun is setting behind the two titans, creating an angelic glow that contrasts nicely with the opposing fans behind them.  When Cal Ripken gave his speech after breaking Lou Gehrig’s consecutive games streak, he thanked four people: his father, his mother, his wife…and Eddie Clarence Murray. 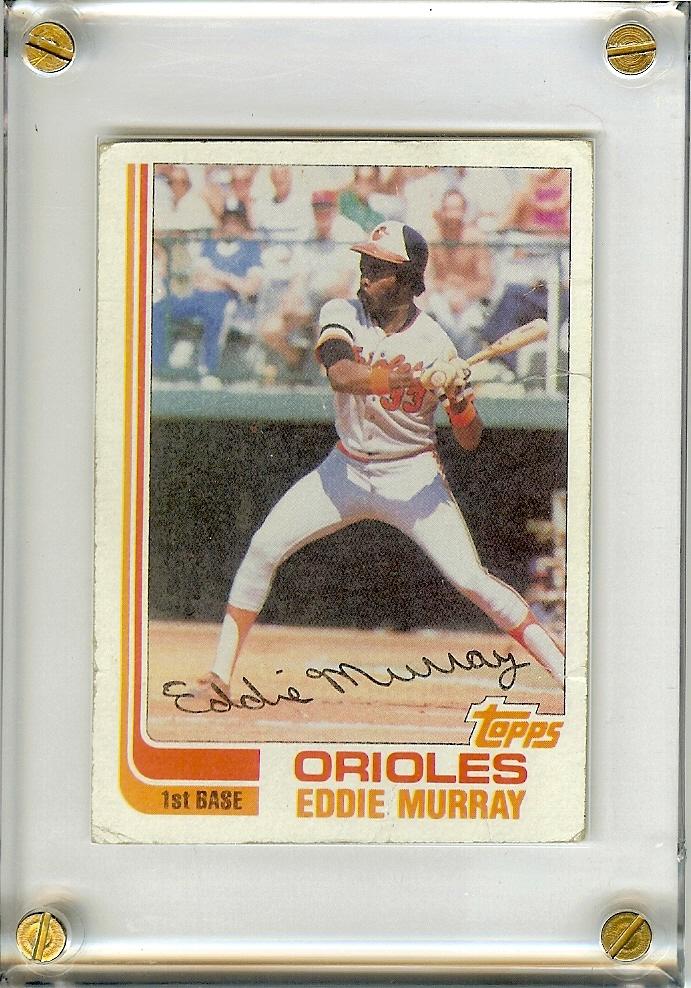 So how does a kid living on an Air Force Base in Texas pick Baltimore as his favorite team?  The answer is easy.  Not only is his little league team called the Orioles, but he also pulls this bad boy out of his first pack of baseball cards.  Look at it, in all of its glory!  Why is a card with so many creases and fuzzy corners being guarded like it’s in mint condition?  Because it is THE FIRST of hundreds of Eddie Murray cards in my collection.  As an added bonus, the card is stupendous.  I am a big fan of the "hockey stick" design Topps used in 1982 and the two tones of orange helps double down on the best uniform in baseball.  Add in the fact Eddie is about to send a ball over the right field wall…?  Well, you have a cardboard masterpiece. 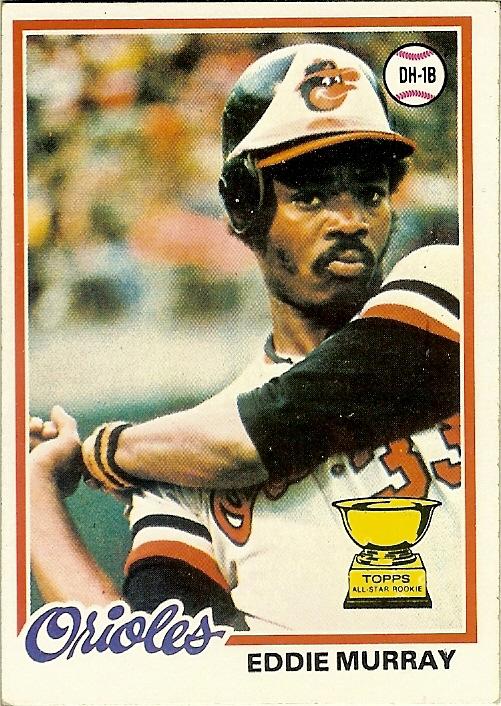 Most of you reading this were probably expecting this card to be number one.  In fact, you’re probably hurling expletives in my direction at this very moment!  Don’t get me wrong.  I LOVE IT.  The best birthday present my parents ever gave me was this, Eddie Murray’s rookie card.  It is clearly the best card in the 1978 Topps set, and I will fight anyone who disagrees.  The zoomed in framing of Murray within the border of the cardboard is inspired.  Eddie looks in the direction of the camera at just the right moment of his practice swing.  Throw in the famous Topps’ "All-Star Rookie" cup and you have one of the greatest cards ever created.  No one can deny this. 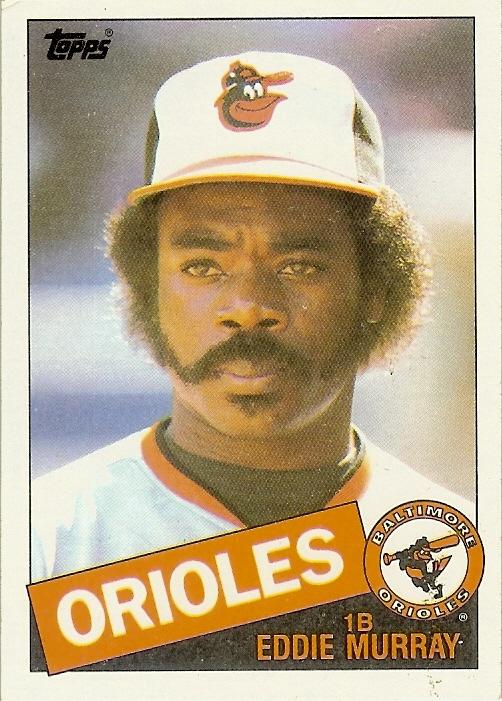 In my humble opinion, this is the greatest baseball card ever created.  There are zero flaws.  It is perfect in every way. To start with, 1985 is my favorite Topps design of all-time.  There in big block letters is the name of the best team in baseball.  Directly to the right is a logo that other teams can’t help but envy.  Below that are two key pieces of information:  player position and player name.  His name is Eddie Murray.  He plays first base.  But there’s more. Topps only allowed the best of the best to have a card number ending in double-zeroes back in the day.  Murray totes the number 700 for Topps – only he could carry a number so large.

But the kicker, the clincher, the divine beauty of this card is the portrait.  The sun warmly embraces the essence of Eddie Murray.  His afro and facial hair are at their zenith of follicle power.  The photographer has captured Murray not in a posed shot, but in a secret moment of introspection.  Look at the eyes of Eddie Murray.  What do they see?  I humbly propose he is looking at the long journey of life ahead, the trials, the tribulations, the ecstasies, the defeats.  What he sees would make lesser men advert their eyes, but not Eddie.  No, Eddie is going to stare down life until life blinks first.  He knows what must be done.  He knows it won’t be easy.  He knows he will do it.  That’s not an expression of bravado or pride.  No, that’s the simple yet deafening look of steely determination.  He is the man.  He is Eddie freakin’ Murray, World Champion, Hall of Famer, and first baseman for the Baltimore Orioles.

Rob Engblom is a lifelong Orioles fan who loves Eddie Murray.  You can follow him on Twitter (@urob33) or read his dorky baseball related blogs (1988topps.blogspot.com and statispro1984.blogspot.com).

The stories presented as part of the 2016 Camden Chat Opening Day Marathon are written by members of our community. To add your voice to the site please consider writing a FanPost.