Congratulations, you have scored tickets to the Mets game! Also, it's May 8th, 2002! Time to head to everyone's favorite stadium... Shea!?!

If you've never had the pleasure of attending a game at Shea before, boy are you in for a treat! Your evening begins on the campus of Rutgers University in beautiful New Brunswick, NJ. Much like I imagine the crazy futuristic year of 2016 to be, this spring has been cold and wet, but today has been sunny and comfortably in the mid 70's! You even cracked out your jorts and the best smelling T-shirt you could find in your room after two weeks of preparing for, and then taking your final exams.

You and your buddies, one rabid Mets fan, two Yankees fans and an Orioles fan (that's you, btw), are using your new found freedom from classes and rain to venture into the city to see the Mets take on the vaunted SF Giants with gigantic headed Barry Bonds, former league MVP and probable future Survivor contestant Jeff Kent, and why will he listed on the Hall of Fame ballot in 2011? destined-to-be receiver of 0 votes, starter Kirk Rueter. It's kind of a last minute decision to go to the game, and the next train is leaving soon. If you'd like to return to your room to pick up your Orioles pullover windbreaker, turn to page 43. If you'd like to assume that warm times are here forever, continue to the next page.

You head straight to the train station and use the last $20 to your name to buy your round trip ticket into the city. From here on out, aside from the 7 Sacagaweas that just came clanking out of the machine, you're bumming money off of your friends. They just don't know it yet.

NJ Transit into the city. If you are lucky, the ticket-taker won't get to your car before you get to the city and your next trip is free. Today is not your lucky day. From Penn Station, you take the 1 to the 7 (possibly... correct me if I'm wrong, fellow NY/NJ citizens of 2002). While on the 7, you observe crazy looking people and formulate opinions of them, a la probably future Survivor contestant John Rocker. The 7 starts as a subway, but becomes an L as you get closer to the stadium. You arrive in Flushing Meadows:

Shea stadium is right across the street from the train stop. This is what you arrive to:

It's going to be dark in an hour. And when it gets dark, those modern art masterpieces on either side will glow neon green and red. It's ugly. But an endearing ugly, like that dog that always wins "Ugliest Dog of the Year", hilarious Medieval restoration fails, or adult Macauly Culkin.

Once you get inside, the stadium is a bowl, and that's about it. It has none of the architectural charm that Camden Yards brought into vogue. There are some cool things about the stadium, though. There is a much-loved mechanical apple in a giant hat that does things whenever a Met hits a HR. That is always a nice touch. No mechanical HR announcing device that you know of in the current world of 2002 is hideous and annoying, and probably no one ever will be. Unfortunately, no Met will hit a HR tonight.

The next 'endearing' quality of Shea is the airplanes. Every 10 to 15 minutes a plane will pass very close to the stadium, just beyond the outfield from right to left. Seriously. Over and over. All night long.

Anyways, back to happier things... Since you literally just turned 21, yesterday, you decide to bum a fiver and go looking for a beer. 20 oz Molson Ice is $4.75, reasonably priced compared to the current, and as far as you know only, Yankee Stadium. You use your id... still sideways facing so they take a second look, but eventually you get your first beer at the ballpark experience!

It's the 2nd inning, the Giants are already up 1-0, and the sun is going down. Suddenly, it's not comfortably in the low 70's. It is now 57 degrees. Shea is windy, and since you are in the upper bowl of the extra bowly bowlness of the stadium, you are exposed to more of the 12.7 mph winds out of the SE. You are ridiculously cold and angry at yourself for choosing the wrong adventure. Another Canadian beverage is also out of the question, as you are not bumming any more money, especially since you are the only one over 21 and everyone else was kinda pissed that you got a beer in the first place. You shiver for several innings as the Giants extend their lead, including an RBI by All Time Great to Pronounce Name Guy Tsuyoshi Shinjo.

As the innings progress, it is unbearable to be in the Upper Level. The Giants are winning by a billion, so you and your friends attempt to gain access to seats much more befitting of a couple of guys ready to conquer the world and not concerned with the impending crushing responsibilities of adulthood. Once you reach an usher that seems intent on keeping the rabble out of the good seats, Gabe does the talking... the rest of you pretend to be watching Scott Strickland unsuccessfully attempt to retire Rich Aurilia. Somehow you're in. Second row, right behind home plate for the last two innings. Jeff Kent, who is on your Rotisserie Team cracks a mammoth shot off of old friend Armando Benitez and you watch it fly out, almost like you hit it yourself... that's how close you are.

And that's it... the game's over. You leave Shea, never to return again. Fair thee well, sweet stadium.: 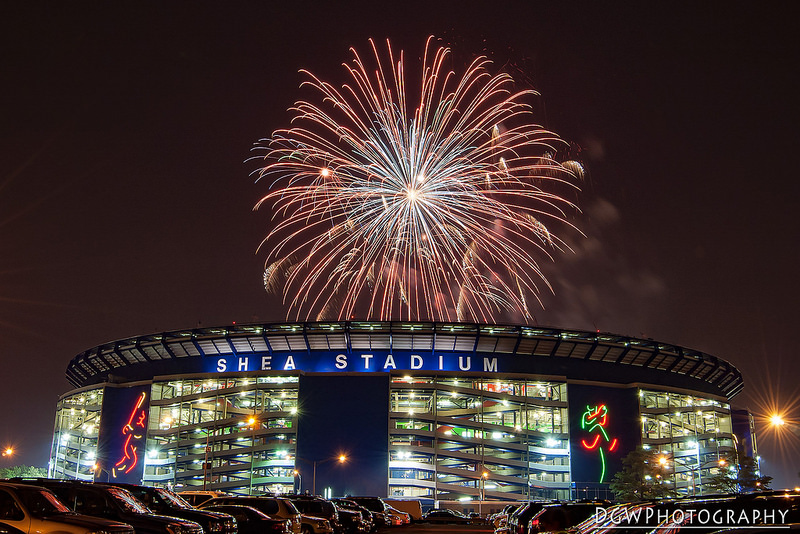