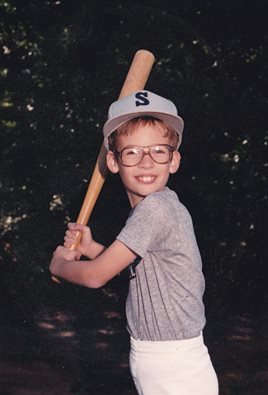 Why was little tflach2 such a good T-baller? Three things: reflexes, hand-eye coordination and ability to pay attention and follow instruction. Why was bigger tflach2 not such a good HS baseballer? Laziness. It's kind of my defining characteristic. I squandered whatever god-given athletic ability that I possessed by not working hard at anything, ever... even something I loved as much as baseball.

Either way, I played ball from T-Ball through HS, so I have some stories of glory and failure... many that I have shared over the years in the OTs, so bear with me if I am repeating myself with this one (I am).

My father was always my reluctant coach in Little League. Not because he didn't want to be my coach, but because he didn't have the work schedule to commit to being at every practice, nor did he have the patience to let the actual coaches suck at coaching when he was able to attend. So, he wouldn't sign up to be the coach and never appeared in any of my team photographs... but by the 2nd practice, he was leading infield drills and giving encouraging advice to all the other kids. "Good try, Jimmy." "Stay with it, Tommy!"... oh and "Get in front of the damn ball, tflach2!"

My dad was always harder on me than the other kids. He was small and scrappy as a little leaguer. Short on talent, but high on effort. I was the opposite. In addition to being one of the taller kids, I could catch, field and throw better than anyone else my age. It was the drive to succeed and belief in myself that was lacking. I understand now that he was hard on me because I had the talent that he would have loved to have had, but at the time... I kinda wished he was more encouraging and less critical.

With all that in mind, I was the pitcher one day for my team, the Dodgers. It was early in kid-pitch, not the year from the picture above (I was the Mariners in that one) but the following year, perhaps. And on this day, the strike zone was... let's say inconsistent. When you're 9, an umpire is an authority figure, someone not to be trifled with... but in reality he was probably just some HS or college punk kid. Anyways, my dad was coaching from the bench (though, as mentioned probably not in an official capacity). I threw a pitch right down the middle. Called a ball. And another one. My dad gently reminded the umpire to remove his head from any place that it might possibly have been stuck. After this exchange, he refused to call any strikes. Literally. For the rest of the inning. No matter where I threw it, he called it a ball. It was like that conga line from the Bugs Bunny cartoon of batters crossing the plate on walks.

The tears were welling up as I stood on the mound. This was before A League of Their Own, but my dad was a strict believer in the rule "There's no crying in baseball." He might have even inspired the lines if the writer of that movie ever attended a LL game that I was a part of. But by the time the inning was over, and some kids mercifully made outs of their own accord, there was no holding it in. I threw my glove down by the bench and started bawling. I expected the Jimmy Dugan look of incredulity on my father's face when he came over to greet me... but that's not what I got.

He apologized to me. Let me know it wasn't my fault. I did what I was supposed to do, it was his fault for jawing at the umpire and it was ok that I was upset (But... I was hitting third that inning so I had to be done crying by the time it was my turn to bat). And he let me cry it out. I was never upset again when my father was hard on me on the diamond. I knew that if even if I failed, at the end of the day, he would be there for me just as long as I tried my best.

I'm three weeks into my son's first T-Ball experience. I am trying to let the coaches coach (Who knew it could be this hard?). I am trying not to say "Connor, pay attention to the game!" and "Always be ready out there!"... but I'm failing. And when I say it, I hear it in my father's voice... which happens to be almost exactly the same as my voice. When I say "Don't be afraid of the ball!" the first time, the transformation will be complete. But Connor will always be allowed to cry. Sometimes there is crying in baseball.