Hitting baseballs for Kim as easy as Hyun, two, three...

Regression? Phooey! “The Hitting Machine” continues to grace the barrel of his bat with the presence of every baseball he meets, providing a spray-it-all approach the Orioles were hoping he would bring.

Share All sharing options for: Hitting baseballs for Kim as easy as Hyun, two, three...

So, two nights ago, when the Orioles prequeled their 12-6 win with a 11-7 win that concluded deep into the night, you could really tell Padres’ starting pitcher Erik Johnson wasn’t having much fun.

His body language was sour, his face was pouty, but I guess inning after inning of missed spots and whiplash can do that to just about anybody. Well, in the top of the 5th inning, after J.J. Hardy singled, Hyun Soo Kim stumbled to the plate.

Kim had an interesting plate appearance in the top of the 3rd inning, where he lined a 106 MPH line drive to center field, only to be robbed by Melvin Upton Jr., who decided to have the best three innings of his life that night.

So, Kim goes through his pre-swing routine, steps into the box, sees a first-pitch fastball and WHAMMY! He belted his second-career big league dinger over the right field fence, a 108 MPH laser that Upton Jr. deemed unworthy of his Mr. Fantastic powers. Johnson, who did more stargazing than pitching, aimed his two-seamer JUUUUUUST a bit narrow. 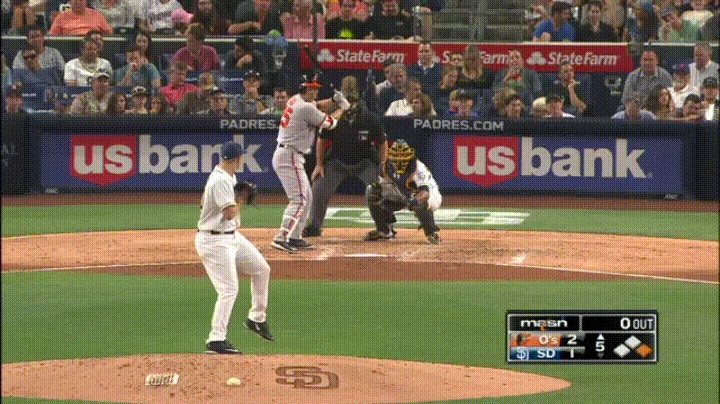 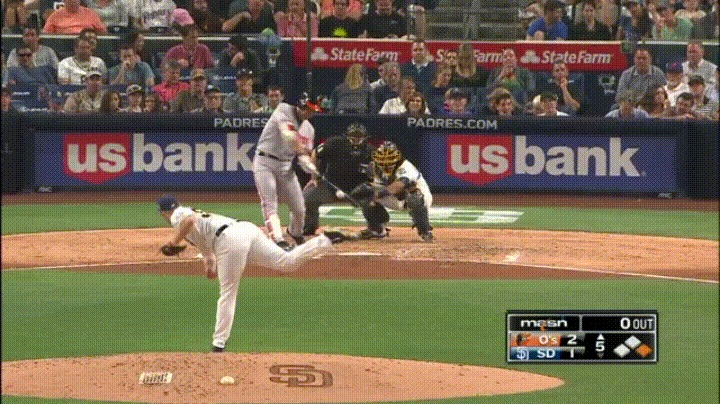 Immediately following the home run, my dad texts me, saying only:

Orioles fans have been lucky in 2016. To name a few, the expedient plate maturity of Jonathan Schoop, Mark Trumbo’s bombastic transition to Baltimore, and Manny Machado’s blossoming into truly one of baseball’s top three or four players have encapsulated the Orioles’ current 47-30 start. The O’s debunking Jay Jaffe and the entire CBS Sports staff is a labeled mountain the Orioles understand, but time and again are fit to climb.

Heaping deserved praise on the trio is well-earned, but to understate the impact of Hyun Soo Kim is to undermine just his frustratingly unique transition to Major League Baseball. Forget the infamous 0-23 spring start, polite declination to Triple-A and sparse early playing time. Despite the initial obstacles, Kim has actually made hitting big league pitching look, well, look easy.

Sometimes the term “spray chart” can be misplaced, because you kind of expect a “spray” to represent more of a mess, but in Kim’s case, messy is good. Perhaps the single most impressive aspect of Kim’s game thus far has been his acceptance of left field.

Pitchers have made a concerted effort to pitch Kim away with the hard stuff, and he’s had no issue going the opposite way. You’ll often hear hitters, TV guys and others say a hitter is really “seeing” the baseball well when they succeed the other way, and the fundamentals behind it are easily understood.

In summation, by letting the baseball travel deeper into the zone, the bat head doesn’t drift . Someone like Pedro Alvarez has a habit of lunging over the plate to reach the outside pitch, and as soon as his top-half collapses bending over to hit the outside pitch, he forfeits his power.

Kim is one of the best in baseball at remaining tall in his stance, trusting his quick hands to cover the outer-half of the plate, all encompassed by his extreme hand-eye coordination. If pitchers want to pitch Kim away, he’s going to continue going away.

Some may look at his .390 BABIP, the seventh-highest figure in baseball among hitters with at least 130 plate appearances, as much to do with his salacious start, but BABIP can mean a lot of things. Yes, there have been a lot of squeaky ground balls that have found holes, some of which can be attributed to luck.

Kim does boast a very respectable 91.6 average exit velocity however, a figure higher than the likes of Mookie Betts, Chris Davis and Kris Bryant. Fangraphs’ Jeff Sullivan wrote about Kim’s deceptive ground balls, hits categorized as ground balls but more or less should be considered line drives. His extreme BABIP probably has more to do with his innate ability to hit the baseball harder than most. That isn’t luck.

The swing-and-miss nuances that come with slugging prowess help to define the Orioles, but that isn’t Kim’s game. He’s one of only seven players with a BB/K% of at least 1.00, and among his colleagues, sits only behind Chris Davis (13.7 BB%) in terms of walk percentage (11.7%). The Orioles were looking for furthered on-base capabilities, and Kim has brought it.

What leads to more walks and solid contact? A tremendous batting eye. According to PITCHf/x, Kim’s 25.9% chase rate is well below the 30.2% league average, while his overall swing percentage of 39.4% also outlays the base average of 46.3%.

Yet somehow, Kim boasts an above-average zone-contact rate of 90.1%, as well as an extremely high O-Contact rate of 79.2%. Evidently, Kim uses his swings efficiently, whether that’s a meatball over the plate or fouling off pitches to stay alive, he isn’t one to swing just for the sake of swinging. He’s calculated in his efforts.

Kim showed all of his plus traits in the at-bat following his second home run, this time against veteran reliever Carlos Villanueva. As good as Kim has been, this was arguably his best at-bat thus far as an Oriole.

Villanueva started Kim with a hittable curveball, though he fouled it off down the first base line. Kim then took a deceptive changeup for a ball, fouled off a hanging curveball, laid off a diving changeup in the dirt, followed by fighting off another changeup fading down and away.

On pitch six, he finally saw a fastball, sending it straight back to the netting, only to be trailed with a slider down and in, also fouled back. On pitch number eight, however, Kim laced a pretty good slider middle-away down the left field line for an RBI double.

Taking tough pitches, staving off strike three, letting the baseball wander into the depths of the strike zone and using the whole field, all gift-wrapped into one eight-pitch double. Stealing from James Carville’s finest cinematic performance, “We have no response. That was perfect.”

Kim’s current slash of .347/.438/.466 is more than enough to write a wonderful rookie chapter. His 148 wRC+ outlines a wonderful narrative. But the skills that bear the weight of his exploding weighted averages foretell Hyun Soo Kim has many many more tales to tell.

I’ve written about Kim four times now in six months, and I’ve continued to advocate for him, though I’m no advanced scout, because I thought there was something there. Fast hands, plus bat control and as for intangibles, the guy is a doof. Baseball needs more doofs.

That’s my guy. That’s my doof.