After somewhat moseying through the first-half of 2016, Pedro Alvarez has quickly flashed the lefty power the Orioles so rightfully sought this winter. As he’s slowly made his rounds through the American League, Alvarez has surely become more comfortable, and dangerous.

Share All sharing options for: Alvarez has found his groove while most of the Orioles lineup has lost its step

As it pertains to Pedro Alvarez, switching leagues isn’t easy.

It’s often overlooked because we imagine hitters are so good at what they do and they’re big leaguers for many reasons, but transitioning from the National League to the American League does come with inherent discretions. Alvarez has, and will continue to see pitchers he’s never seen before, and such a windy road naturally carries moments of feeling lost. With new pitchers comes all the baggage of never-before-seen arm angles, deception, sequencing, pure stuff, etc.

For most of Alvarez’s career, he’s been pitched on the outer-half of the plate, a feasible approach to negating his mostly-pull power on the inner-half. It’s no secret Alvarez’s Flaccometer points towards "bum" when attacked away, but every pitcher’s blueprint is different in producing the end result. It’s quite the task in figuring out this puzzle, and as such, Alvarez used the first-half of the season to gather all the pieces.

Over his first 194 plate appearance as an Oriole, Alvarez slashed .249/.320/.462 with 9 home runs and 26 RBIs, good for a 105 wRC+ and .332 wOBA. For the laymen, the summation of Alvarez’s initial offensive returns was slightly above league average, like a dinner that doesn’t quite leave you full, but you think "Ehh, I probably don’t need that second steak,". Just satisfied enough.

Fangraphs projected this offseason that the cost of a win in 2016 was worth roughly $8M, and with Alvarez’s first-half 0.3 fWAR and signed at $5.8M, he was already on pace to, at the very least, sustain ample production at his cost. But that was first-half Pedro. We’ve been introduced to his alter-ego, El Toro.

In 78 second-half plate appearances, Alvarez has slashed .267/.295/.653 with already 9 more home runs. In less than half the games thus far, Alvarez has been worth 0.5 fWAR and a 147 wRC+, much more than league average. While he may not be walking as much as he was, he’s exchanged the OBP numbers for fewer strikeouts and the kind of slugging potency the Orioles need to reclaim an identity that even Jason Bourne couldn’t find.

Having not really seen a lot of Alvarez before this year, other than highlights of titanic bombs, his ability to time a varying degree of fastballs has actually been a pleasant surprise. It’s no shock either that Alvarez would much rather hit the fastball, and over the last few weeks, he’s been afforded the chance to swing at more fastballs. That’s good news. Even better, Alvarez is taking advantage of fastballs over the middle of the plate. 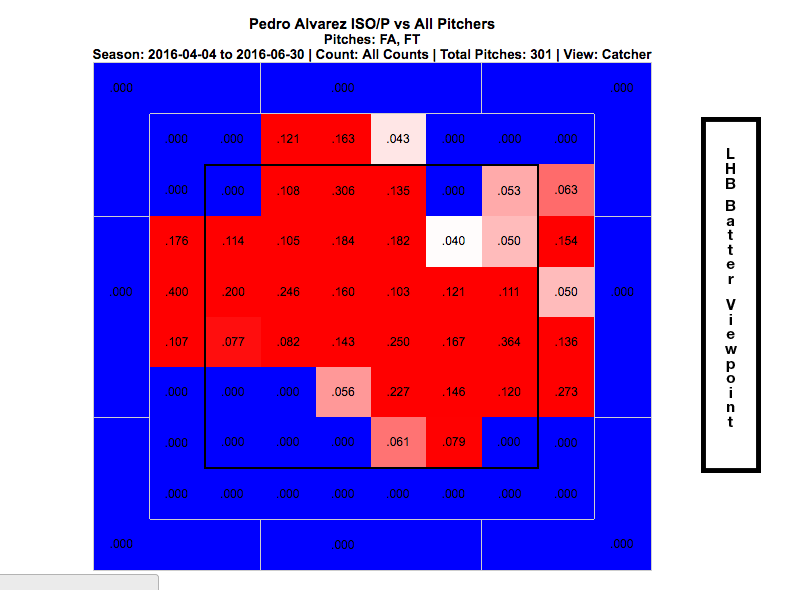 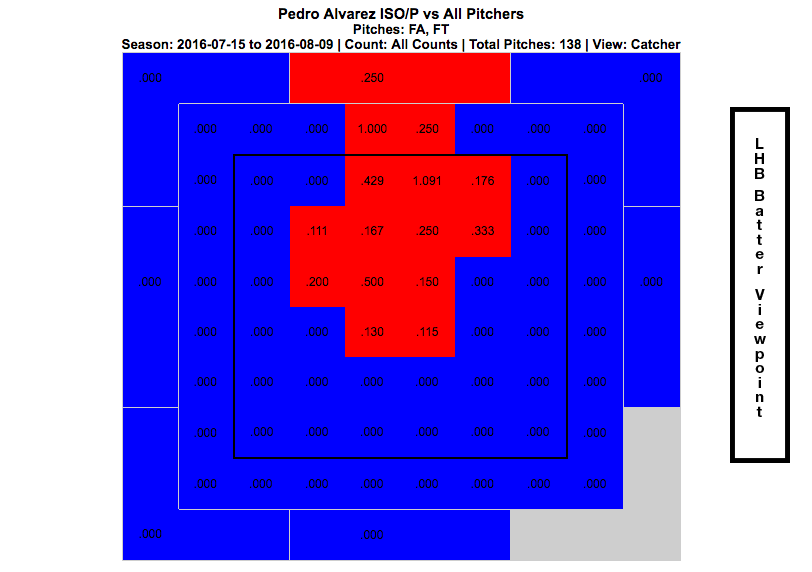 One of the common misconceptions about hitting is that guys can hit anything, anytime. In an era where a "fastball count" is longer a thing, the best hitters in baseball are the guys that take advantage of mistakes more often than they miss. Early on, Alvarez wasn’t driving the baseball in the rare opportunities he was gifted. Alvarez has maintained a somewhat steady swing percentage throughout the year, but during this stretch of dominance, he isn’t swinging much more than usual. He’s picking his spots.

Not perfect however, Alvarez is still chasing the offspeed stuff with a bit more regularity and isn’t doing much with it, but a rise in exit velocity in regards to both the fastball and breaking stuff shows a guy who is really seeing the fastball, and is adjusting mid-pitch as well. Both of which are signs he’s very much locked in.

Alvarez is still being pitched with a focus towards the right-handed batter’s box, but he’s also had the fortune of the outside strike being called less against his favor. 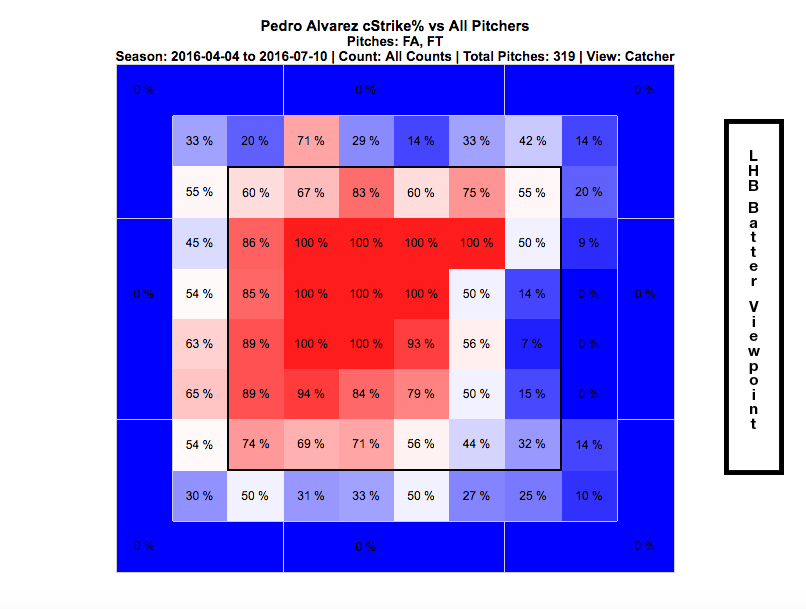 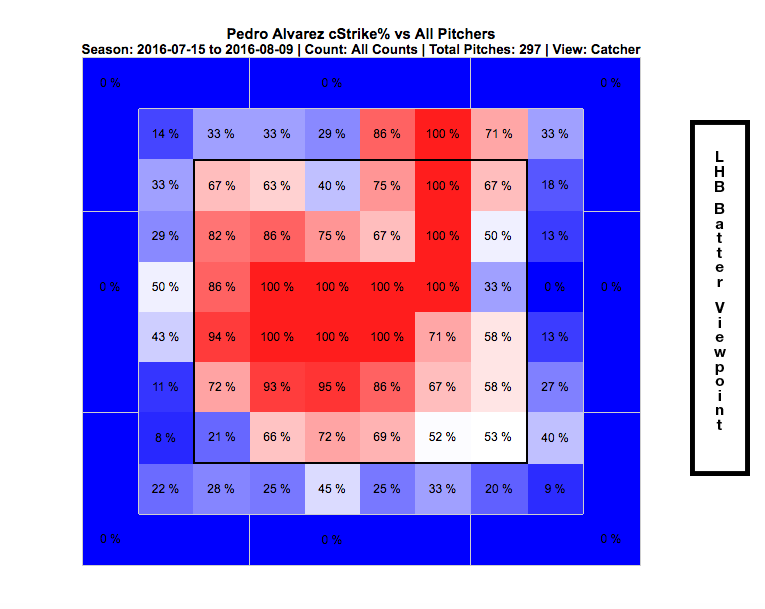 With pitchers unable to nickel and dime him away, it’s brought more pitches back over the plate. While he may not be as willing to take the availability of left field as often as he’s given it, Alvarez has done his due diligence in forcing more pitches into the parts of strike zone where his qualities are formally suited. And though there may be a bit of luck involved in terms of pitches that were once called strikes no longer labeled as such, over the course of 162 games it’s OK to catch a break.

Alvarez’s defensive ineptitude forced a lot of shakeup within the construction of the Orioles everyday roster, but he’s found a solid niche as a DH. The Orioles, now in August, have yet to click collectively as a lineup, but Alvarez is yet another part of the sum that continues to produce while his compadres fail at the same.

And he’s done it rather sneakily.