Yesterday afternoon, I left work early and drove down to Bowie to see game 4 of the Eastern League Championship Series between the Bowie Baysox and the Trenton Thunder.

Wednesday I toyed with the idea of attending, if there were a game four. Thursday I went back and forth a few times, choosing a seat, unchoosing a seat, picking a section, picking another section, before pulling the trigger on a ticket. I settled on a seat in section 111 on the aisle a few rows back from the Baysox dugout, and when I left work the ticket for Friday night's game 4 was sitting on my desk, awaiting the next day.

I had no reason to attend — no rooting interest in either team, as Bowie eliminated the Harrisburg Senators from the postseason last Saturday and I could no more root for the Baby Yankees (ie., the Thunder) as I could the Real Yankees — which, in a paradoxical way, was every reason to attend. The days of summer are fading, the opportunities to see a baseball game are dwindling away, and baseball, even teams one doesn't root for, is infinitely better than no baseball. I had never been to Bowie's Prince George's County Stadium, it's really not that far from the office in Hunt Valley, and I could sit in the stands and enjoy a nice evening.

For Bowie, this was an elimination game. Trenton took game 1 in the best of five series at home on Tuesday, and Bowie evened the series (against rehabbing Yankees starter Luis Severino) in game 2. Bowie then lost a tight contest in game 3 back in Maryland, putting the Baysox on the brink and Trenton one game away from another Eastern League title.

Despite the best efforts of the Baltimore Beltway and the New Jersey-level traffic hellscape that is Route 3, I arrived in Bowie just before the gates opened. I expected to pay for parking, as I would in York or Harrisburg, and was pleasantly surprised that I did not. There were not many cars in the lot at 6 o'clock, though there were a few people tailgating, and there might have been fifty people in line, including a group of twentysomethings in Trenton Thunder jerseys, before the gates opened. The vast majority of the fifty, though, were wearing Orioles or Baysox apparel. One notable exception was the man standing in line next to me wearing a Lancaster Barnstorms cap. I felt a little out of place wearing a Nationals hoodie (on the off chance that it became chilly).

Bowie's stadium reminded me greatly of Harry Grove Stadium in Frederick, where the Frederick Keys play. The exterior facades are not similar, but inside everything about Bowie was bigger — wider concourse, more luxury boxes, more seats. The seating configuration was virtually identical (though Bowie's seating bowl did not seem to be as steep as Frederick's), and there was a similar Great Wall of Ads (though the Wall of Ads in Bowie was set back from the outfield wall instead of being the outfield wall in Frederick). In general, I found Prince George's County Stadium somewhat lacking in charm and character. If Aberdeen's Ripken Stadium is the more polished, refined version of Frederick, Prince George's is the fat, indolent brother of Harry Grove, the Mycroft Holmes to Frederick's Sherlock and Aberdeen's Enola. 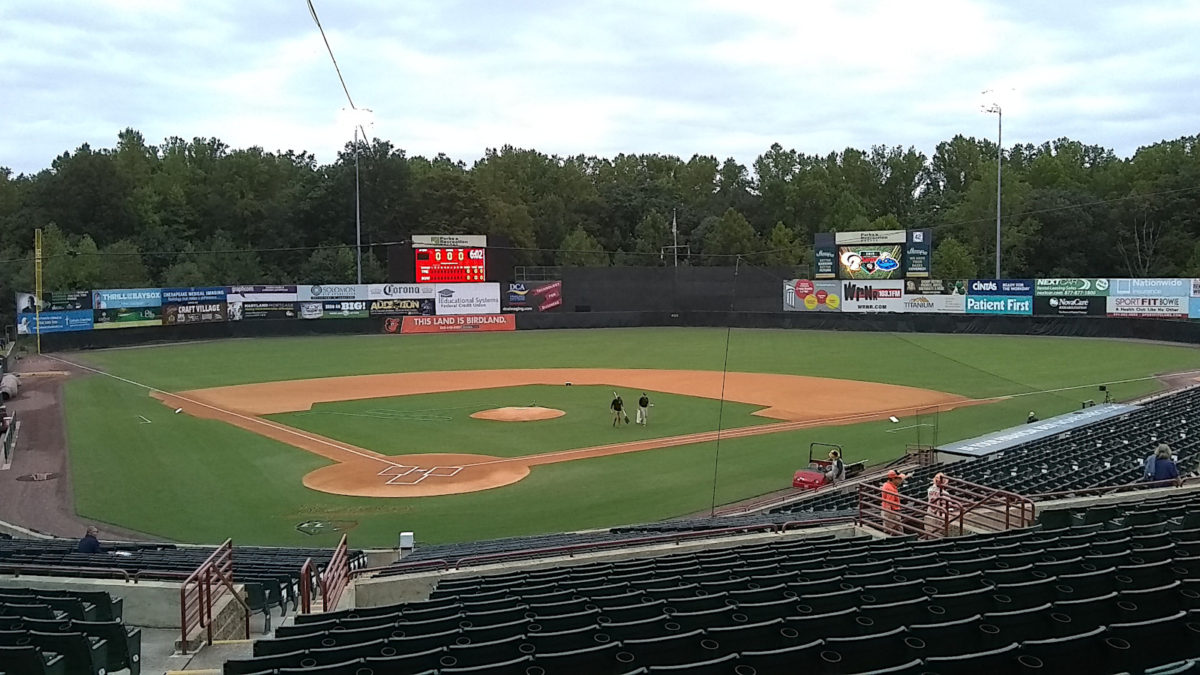 An usher showed me to my seat. His name was Fred, a tall black man (about 6-4) with close cropped salt and pepper hair, a college professor who works part-time at the stadium when he can. I told him I'd never been to Bowie before — "What took you so long?" he said with charm and a beaming grin — and when I explained (from Pennsylvania, a Harrisburg Senators fan, there to lend support to the Baysox) he thanked me for coming and, after wiping down my seat, he pointed around the concourse and gave me a virtual tour of the stadium (restrooms, concessions, beer stand). He made me feel very welcome, and we shook hands. Anyone at the Baysox, if you're reading this, Fred represented your organization well.

When I bought my ticket for the game Thursday afternoon, many, many seats were available. I expected a light turnout, and I'd guestimate that the attendance Friday night was in the 2,500 range. The second edition of Eric and Wendy Pastore's book 500 Ballparks says the capacity of the grandstand is about 8,000, and while there were people in pretty much every section, even the grass berm in left, many areas of the stadium were quite thin, and only one of the luxury boxes (near the end on the third base side) were occupied. The Trenton faithful were generally along the third base side behind the dugout, and a number of them brought cowbells which they clanged during the game.

A local Little League team was the night's "Field of Dreams" team, and the Little League players took the field with the Baysox players, to the theme from The Natural, as the Baysox line-up was announced. 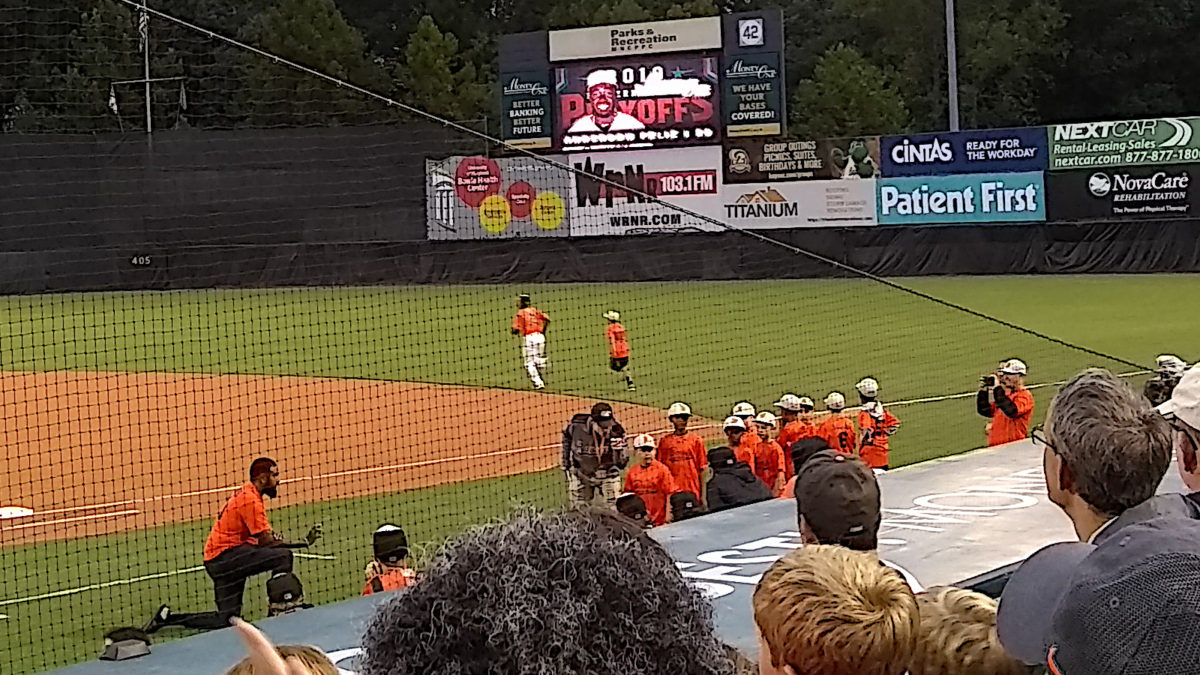 Other than the 2019 baseball card set, my only souvenir from the game is the Legends collectible cup. There was no game program to buy, just Xeroxed line-ups and game notes, all of which I took for keeping score and later reference. As far as concessions go, I wholeheartedly recommend the Applegate beef hot dog; that was so good. 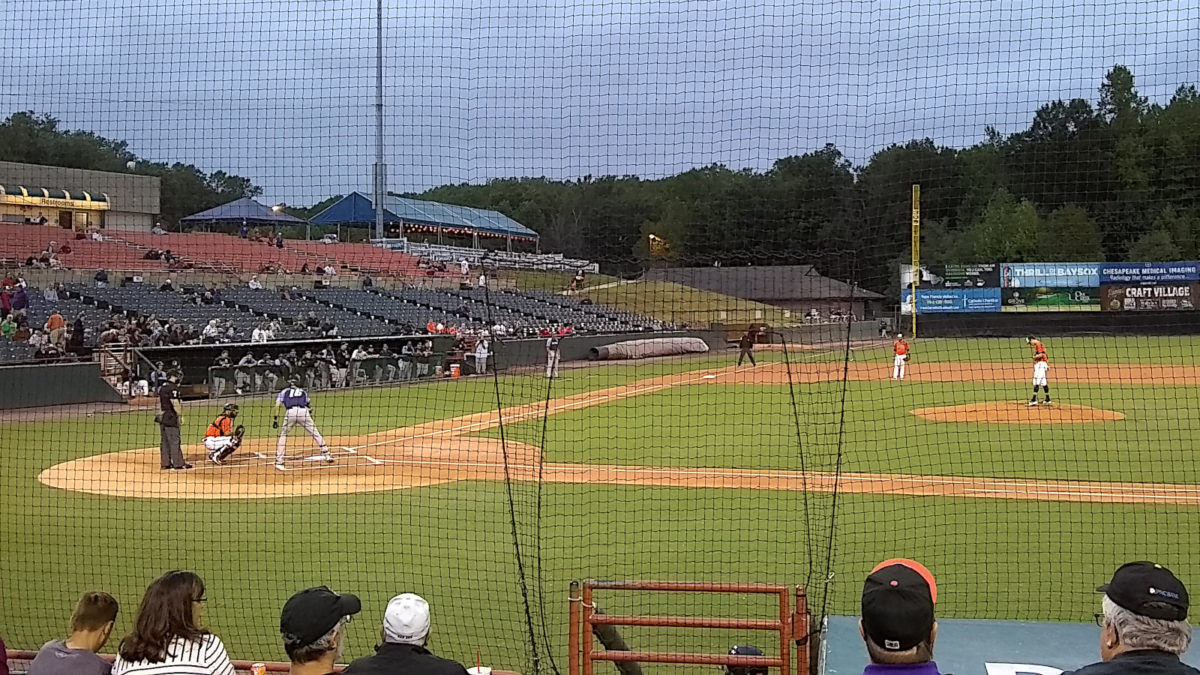 The bat dog and his antics proved surprisingly popular among the Bowie crowd. When I say "antics," he ran out onto the field to collect a foul ball and had to be coaxed back, then he tried to collect a bat that one of the Thunder was actively using. (Tossing him another bat to collect didn't quite work.) He was only out of the Thunder's locker room during the top of the second, but throughout the game many around me would shout, "Bring out the dog! Bring the dog back!"

Herb lasted two innings, giving up three runs. This was an elimination game, and Bowie manager Buck Britton obviously didn't want the game to get out of hand, so he turned to his bullpen to limit the damage. (Contrast this to last Saturday's game in Harrisburg where Bowie clinched the Western Division; the game was out of reach for the Senators so early that manager Matt LeCroy seemed to concede the game and had starter Carson Teel go five innings and brought some of the pitchers in from the bullpen early.) He turned first to Tayler Scott, who gave up a home run to the first batter he faced, Thunder first baseman Chris Gittens. Scott was himself replaced in the fourth, down 4-0 with two outs and runners on first and third. Something in Scott's delivery was judged a balk just before he was relieved, even though it wasn't clear to anyone, let alone Scott, exactly what the issue was. 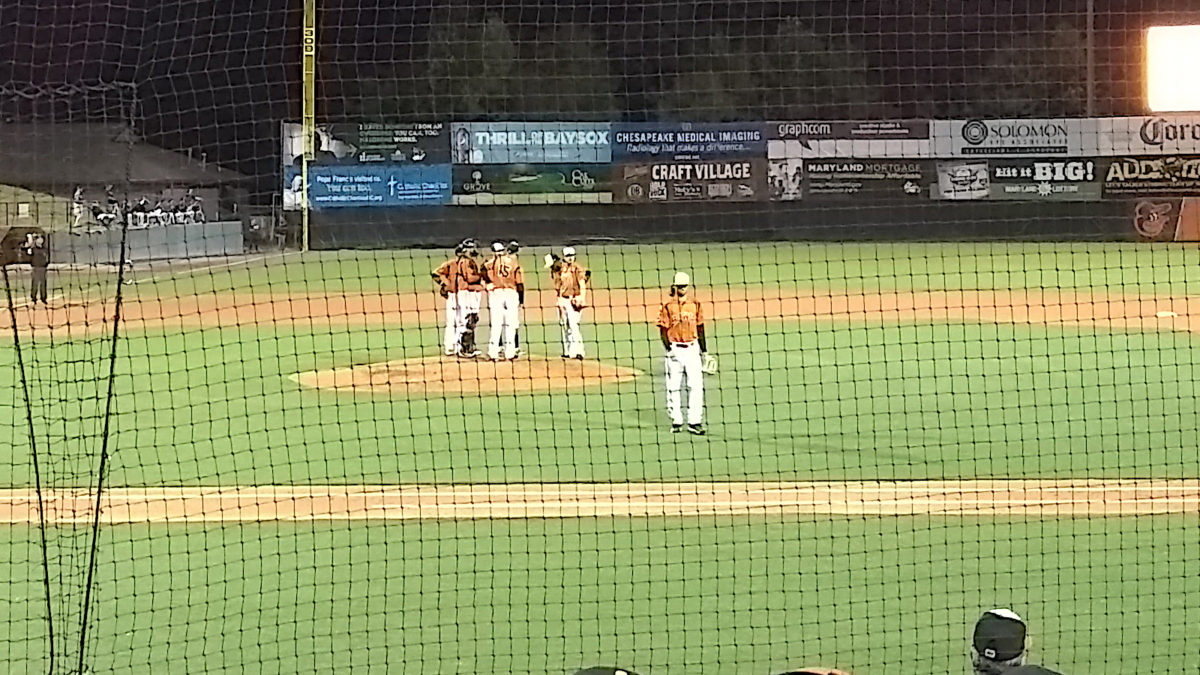 An an aside, the video board in center left that displayed the name of who was batting and statistics (postseason and in this game) was often difficult to read, with white text on a yellow background. I find, as I'm writing this and comparing my notes to the handouts, that I had some of the names wrong, simply because they were unreadable and I was left to making a best guess based on what I thought the PA announcer said.

Trenton's starter Rony Garcia had a no-hitter through five. He was replaced by Dellin Betances in the sixth, who carried the no-hitter through two batters (Ryan Ripken and Preston Palmeiro) before giving up a home run to Cedric Mullins, finally putting the Baysox on the board and pulling them to within 3. 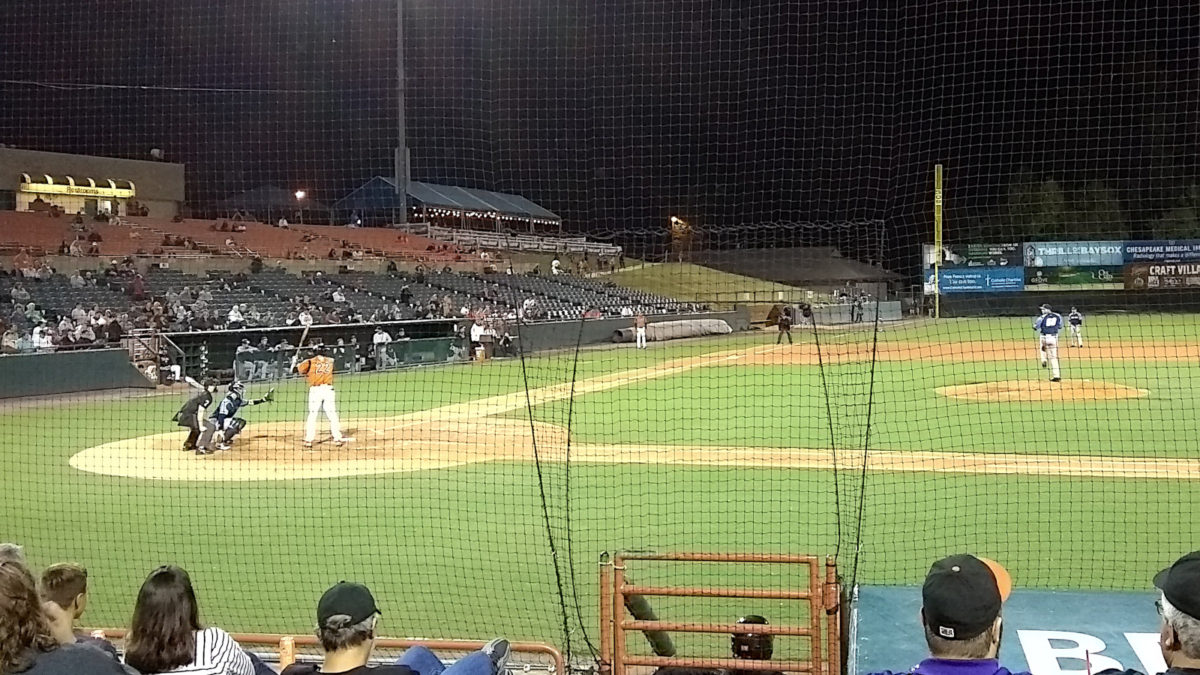 I was surprised at the level of the vitriol directed at the umpires and the Thunder by the fans. Heckling is part of the sport, I know, but some of it, especially from a man three rows in front of me crossed a line into territory that would fit right in on the BestFansStLouis Twitter feed — calling for players to get hit by pitches and crude sexual mockery of the umpires and the Thunder's base coaches by name.

On the other hand, there was also much cheering for the Baysox, which made Harrisburg Senators games seem sedate by comparison. There was a little boy near me, ginger haired, no more than seven, who screamed himself hoarse with "Let's go, Baysox!" chants. And, even down 5-1 (Trenton got the run back in the top of the 7th) and outs running out, the crowd was never out of the game.

If fans were leaving the game early to beat the rush and because Trenton's victory was inevitable, I did not notice until the 9th. The father and son sitting in front of me got up and left. The son, eleven or twelve, wanted to stay, but the father shook his head — "I don't want to watch," he said. I saw Trenton clinch an Eastern League title in Harrisburg in 2013; I didn't want to watch that, either, but I stayed. Still, I didn't blame him. Watching your team get eliminated or lose a championship, on your field, sucks.

In the bottom of the 9th, with one out and Thunder pitcher Daniel Alvarez on the mound, Anderson Feliz hit a home run to left that made the score 5-2. Yusniel Diaz grounded out to short, and one out away from elimination Carlos Perez dumped a ball into center. If the Baysox were going to go down, they were going to go down fighting. 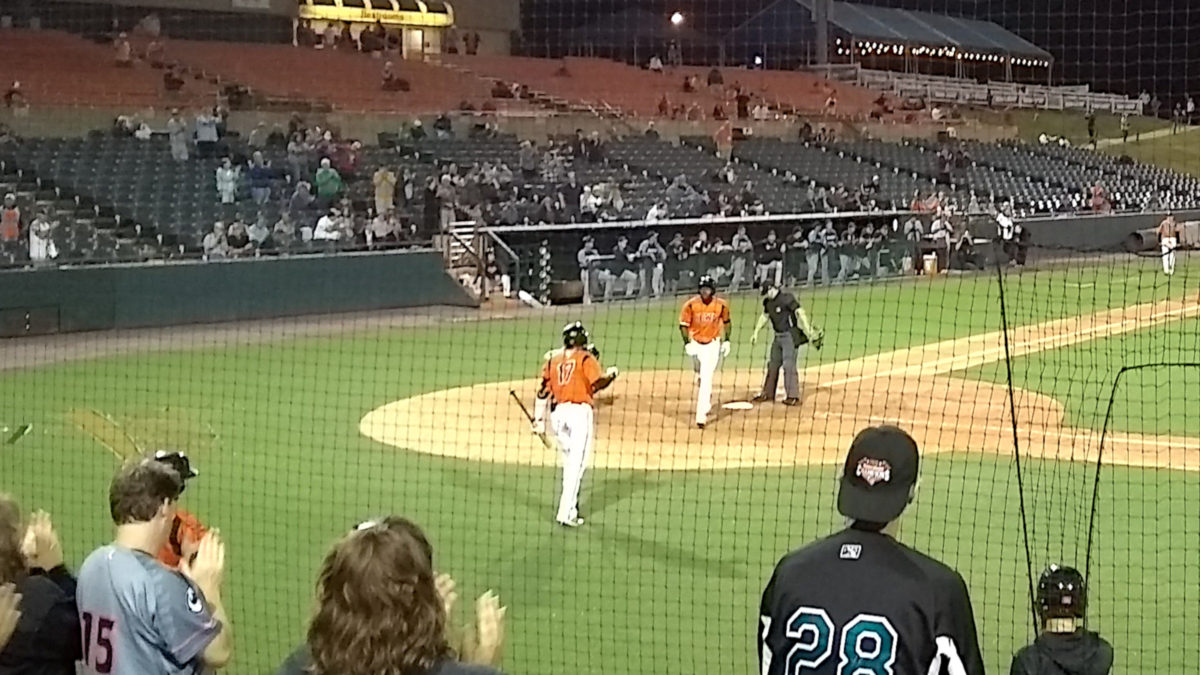 Then Jesmuel Valentin skied a ball over the infield, it settled into the second baseman's glove, and the game was over.

Trenton's dugout exploded onto the field. The team, including the bat dog, mobbed one another near short. Coolers were dumped. Hoots and hollers ensued. Cowbells clanged.

Someone a few rows in front of me shouted, editorially softened by me, "Get off the field!" In the main, though, a silence descended on the park as fans began filing out. The PA system began to play Frank Sinatra's "New York New York," to some obvious displeasure of the Bowie faithful, as the championship t-shirts were handed out on the field.

I was surprised how many Bowie fans — a few hundred, by my guess — stayed to watch the trophy presentation. I stayed to watch it in 2013, which is how I ended up with a Trenton player's cap when they came off the field and threw them into the stands, but I was by far the exception that night. 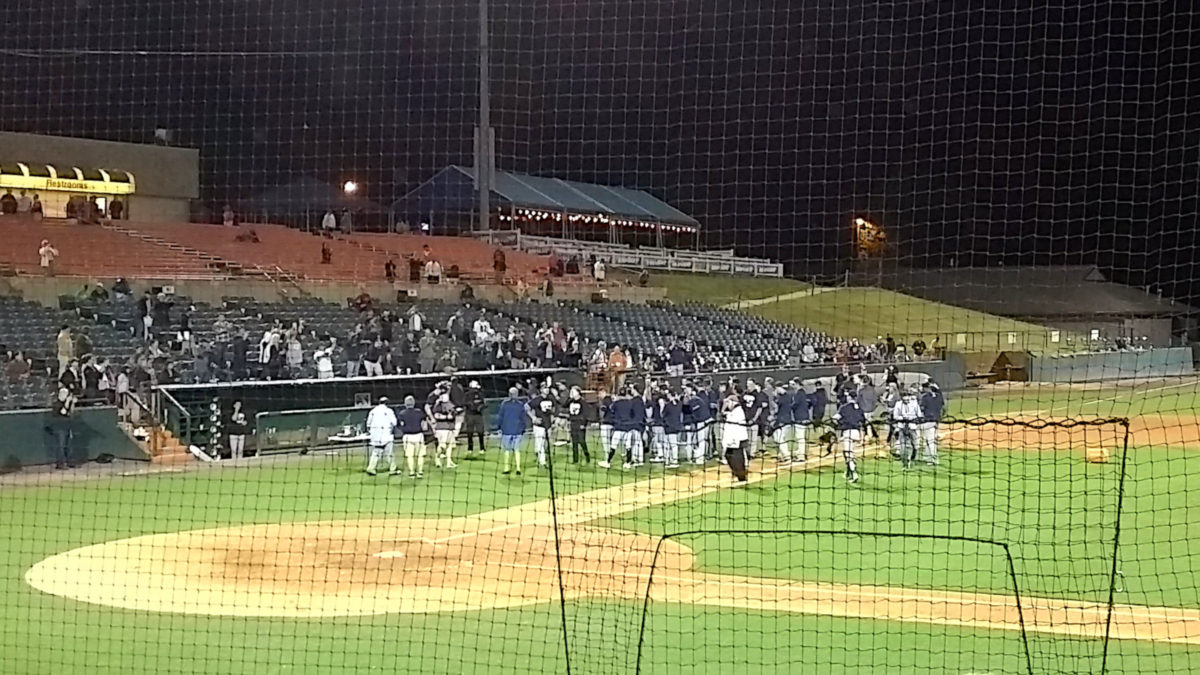 I never needed the hoodie. The night was overcast but pleasant, and when I left the stadium the light of the full moon was broken and eerie through the clouds.

The drive going home from Bowie to York, oddly, took just as long — about an hour and a half — as the drive from Hunt Valley to Bowie five hours earlier. The difference time and commuter traffic makes. I wasn't even speeding going home; as one of my coworkers put it last year, "Allyn, you drive like a little old man," but I think of it more as the experience of learning to drive in Virginia where the police will nail you for going five miles over the speed limit.

And, maybe next year, some evenings I'll leave work early, drive down to Bowie, sit along the third base side behind the dugout, and actually have a team to root for when the Harrisburg Senators are in town.