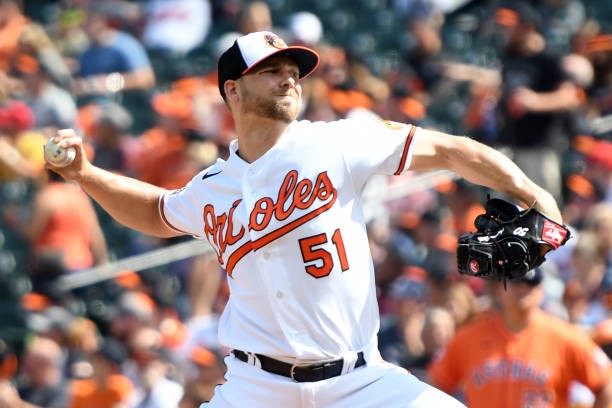 With Opening Day less then 90 days away, it’s time to examine some recent beneficiaries of Baltimore’s state-of-the-art player development program. Several players found success this past year in Charm City. The first of those that I would like to highlight is Washington State native Austin Voth.

Voth is a right-handed pitcher drafted by the Washington Nationals in the 5th round of the 2013 MLB draft out of the University of Washington. He made his major league debut for the Nationals in 2018. Prior to being claimed off waivers by Baltimore this past June, Austin pitched 181 innings over 5 seasons in the nation’s capital as both a starter and reliever. After a few weeks of working out of the bullpen and steadily increasing his workload, he was eventually converted to a full-time starter. Before getting into the nitty gritty, let’s do an overview of his arsenal.

Voth utilizes a 5-pitch mix that features a 4-seam fastball, cutter, and curveball as his primary selections. These are complimented by both a slider and change-up as secondary pitches. He possesses the ability to throw high spin pitches that consistently compete with those in the upper echelon of the league. His fastball and curveball rank in the 84th and 96th percentiles in all of MLB according to Baseball Savant.

As previously mentioned, Austin twirls a 4-seam fastball that reaches a max spin of 2,357 revolutions per minute (RPM); which ranks within the top 25% of all pitchers (minimum 150 PA). The pitch tops out at 95.6 mph and features a combination of both backspin and sidespin creating nearly 14 inches of vertical movement as well as 7.2 inches of horizontal movement or what is also commonly referred to as "rise" and "run".

Thanks to the Magnus Effect, a FB thrown with backspin (just like Voth’s) can withstand the force of gravity pulling the ball down and ultimately sink less as opposed to another pitch thrown with back, side or gyro spin. This phenomenon allows him to hammer the upper part of the strike zone and generate additional swings and misses due to the fact that opposing hitters are more likely to swing underneath a high spin fastball. Arriving next on the list is the curve. This is far and away Voth’s best pitch. He spins the ball an average of 2,974 RPM ranking 11th among all qualified pitchers during the 2022 MLB season. Velocity typically resides somewhere in the 75–79 mph range. The pitch exhibits slightly above average vertical movement for a breaking ball.

However, what really sets him apart from the competition is his ability to produce over 16 inches of HORIZONTAL movement which is 59% better than league average. In turn, he throws a curveball that basically "sweeps" down and away from right-handed hitters which plays really well with the elevated heaters. The cutter is the least effective offering within his arsenal. It has the highest expected offensive statistics of all his offering as well as the lowest strike out rate, a mere 13.1%. When he arrived in Baltimore, Austin was utilizing his cutter approximately 36% of the time. By season’s end, that number dropped to just below 13%. He hurls it at 89.5 mph along with 2,442 RPM; both being approximately league average. Voth is able to achieve a decent amount of glove-side run inside to lefties but exhibits below average vertical break. Shall we get some slider action up in here? Voth throws a sweeping slider with a ton of sidespin. He averages nearly 12.5 inches of horizontal break which is in the top 15% of all qualified pitchers. This allows him to really throw it away from righties as 91% of his sliders that were thrown this past year were against right-handed batters. He also ranks in the top 7% in terms of spin at 2,743 RPM and topped out at 85.8 mph. However, he is far below average when it comes to producing any vertical movement on the pitch. Last but certainly not least, we have the change-up (technically it is least since he only throws it 0.8% of the time). Despite it being small sample size, it should be noteworthy that every changeup Voth threw last season was against left-handed batters. His metrics are pretty average across the board. He throws the pitch right around the same velocity as his slider along with 1,925 RPM. It’s important to keep in mind that a change-up grip naturally reduces both the velocity and spin rate of the ball. Now that we have a better sense of his arsenal, let’s look at some results from this past season. Simply put, Voth was abysmal with the Nats before ultimately getting designated for assignment. He posted a 10.13 ERA and a WHIP north of 2 in 18.2 innings. Opponents were slashing .386/.426/.568 along with a .994 OPS.

Fortunately, success came almost immediately upon joining the Orioles. He only allowed 10 earns runs in over 31 innings across his first several appearances. The 30 year old righty finished up the year with an ERA just over 3 and a WHIP of 1.22 in 83 innings pitched. Opponents slashed .204/.303/.394 along with a .696 OPS; both massive improvements .

With that being said, what exactly went wrong for Voth when he was in DC and how did he improve so drastically in such a short amount of time? The main reason can be attributed to a change of scenery.

OPACY became much more pitcher-friendly in 2022 with the addition of Mt. Walltimore. Voth surrendered a total of 14 ding dongs throughout the season. Had every ball in play against him occurred in Baltimore, only 10 would have ended up being home runs. As for Nationals Park, that number would increase to 15.

The Orioles were also simply a much better team than the Nationals. Washington was nowhere near competitive and featured one of MLB’s worst defenses which certainly doesn’t bode well for pitchers. According to Fangraphs, they ranked 29th in defensive runs saved (DRS) and dead last in outs above average (OAA). Baltimore finished 9th and 14th in each respective category. Voth posted a 4.93 FIP along with the aforementioned ERA over 10 during his time in the nation’s capital. In Baltimore, his FIP remained marginally consistent at a mark of 3.96 while his ERA plummeted to just 3.04.

He also sported a .455 BABIP over those first few months with the Nationals. This was MUCH higher than his career average of .281, supporting the notion of poor defensive play behind him as well as just generally being unlucky.

Piggybacking on the change of scenery, in an interview with ESPN journalist Jesse Rogers, Voth had some kind words in regards to Baltimore’s baseball analytics department. He was quoted saying both "I was kind of blown away by all the data that they have here" as well as "The video guys and how they can break down stats and pitches. And individually things for each pitcher. That was big for me."

In my opinion, from those words it could potentially be deduced that the Nationals aren’t as adept in the whole analytics/player development revolution in comparison to their geographic rivals. But who knows?

Another reason for the turnaround is pitch selection. As I previously mentioned, Voth’s worst pitch is his cutter. Opposing hitters manufactured a .392 wOBA solely against this particular pitch. By cutting (pun intended) down the usage from 37.6% to just above 12%, he threw the cutter less and relied more on his superior offerings.

This brings me to my next point, relying on his superior options. Upon making the short journey up I-95, he began to heavily favor the curveball, rightfully so. The righty generated a 28.4 Whiff % and a 27.2 K%. The latter being the highest out of every pitch in his arsenal. Opposing hitters batted .243 along with a .293 wOBA. Click the link below to see it in action as he prevents Aaron Judge from hitting his record-breaking home run.

Voth also began to flaunt his plus slider down the home stretch. He abandoned the pitch after the 2019 MLB season after not experiencing much success but brought it back in July of 2022. He threw the pitch nearly 92% of the time to right-handed batters. Hitters whiffed on the sweeper nearly 35% of the time and batted .158 with a wOBA of just .200. Take a sneak peek at this absolute filth that punched out Spencer Torkelson.

Aside from it simply being an excellent pitch, he also greatly benefitted from the slider in that it naturally created some deception. By adding a breaking ball that differs from, but also compliments his primary pitches, Voth effectively kept the opposition back on their heels and guessing at the plate. Instead of just sitting curve, hitters now must watch for an eerily similar, but ever so slightly slower slider (Say that three times fast). It will be interesting to see how he further incorporates the pitch into his arsenal.

Upon entering his second year of arbitration, Austin was tendered a contract for 2023 earlier this offseason. This effectively guarantees a spot on the Orioles Opening Day roster barring an injury or trade. However, whether or not he ends up being a part of the starting rotation remains to be see.

Manager Brandon Hyde has a plethora of options to choose from between the impending debut of top prospect Grayson Rodriguez, addition of Kyle Gibson, as well as the eventual return of John Means. Not to mention the likes of Bruce Zimmerman, Tyler Wells, Spenser Watkins, Dean Kremer, Kyle Bradish, and Mike Baumann. If GM Mike Elias decides to further complicate things and acquire more external pitching help via free agency or trades, Voth would certainly be well suited to act as either a swingman or operate primarily out of the bullpen as a long reliever.

Do I think Voth can put up CY Young Award type numbers? Not necessarily. What I do know is that if he can successfully replicate or even build upon his 2022 second half numbers, he will be a tremendous bargain while earning a salary of just $2 million as projected by MLBTradeRumors. Whatever 2023 brings, one thing is for certain, the Orioles found themselves a diamond in the rough.