The Blue Jays won yesterday, which keeps the Orioles lead in the AL East at three. But when you've got the lead, you're the one in control. And no matter what, the Orioles will be in first place at the All Star Break. When the Orioles lost Wednesday at home against the Nationals, Mark and I talked about how demoralizing it would be if they went into the break with a five-game losing streak. We really are the worst.

School of Roch: Showalter on Jimenez and Norris
In case you missed the news, Ubaldo Jimenez is going to the disabled list with a sprained ankle. Kevin Gausman is coming back to take his place.

Winning Baseball Hasn't Made Me Happy | Roar From 34
A very good read, and something I think a lot of Orioles fans can relate to. I know I can.

Yankees hit Steve Pearce twice, but don’t ruffle the Orioles' feathers - NY Daily News
To recap, good guy Steve Pearce, who was called out by Joe Girardi in the last series as being malicious, graciously takes his two HBP in stride, saying of course they weren't intentional. Bad guy Kelly Johnson is convinced the Orioles hit him on purpose. Why, because you homered? Get over it. You're Kelly Johnson.

Wieters: O's have chance to be 'special' team | orioles.com
They'd have a better chance if he weren't hurt, but oh well.

Hot dog tour of ballparks brings man to Bradenton | Mysuncoast.com
This guy has been to over 30 major and minor league ballparks giving scores to the combined hot dog eating/baseball watching experience. Only Camden Yards has gotten a perfect score. Taste the difference quality makes!

Today is the birthday of former Oriole Jack Harshman, who played for the Orioles from 1958-9.

I couldn't decide which picture to use on this story, so I went with Manny scoring the winning run while Orioles fans celebrate and Yankees fans mope in the background for the cover, and am adding this one here as a bonus: 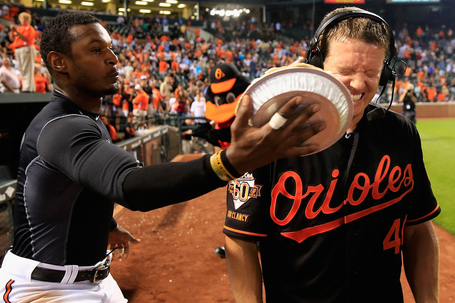